Good Friday to you Steelers’ Fans. I trust that all of you had a terrific Independence Day.

One of the most difficult things about covering the Steelers in this 24/7 world of instant gratification is trying to preach patience to fans. This can apply to just about anything related to the team but one area in particular is when it comes to player development. Let me give you an example. Let’s look at Sean Davis. He’s now played three full seasons with the Black and Gold and I think we have a pretty good idea of what he is as a safety. This doesn’t mean he can’t get better and it doesn’t mean he can’t get worse. What it means is that we know what his skill set is and we know what to expect. In other words, three years is more than enough time to evaluate. A guy like Terrell Edmunds however is a different story. He’s played one full season and the jury is absolutely still out. He played more snaps than anyone on defense in his rookie season yet left a lot to be desired in terms of his overall play. Rather than call him a “bust” why don’t we afford him the same amount of time we’ve given Davis and many others before him? This doesn’t mean that I don’t have concerns about him moving forward but I also see things that give me hope that he could be darn good player. Keep in mind that Troy Polamalu didn’t start a single game his rookie season. Therefore, let’s have some patience people.

Former Steeler Tony Dungy endorsed former Steeler Donnie Shell for entrance into the Hall of Fame yesterday and I think this is something we need to get behind now.

Tweet of the Day… I still haven’t seen Season 2 so….

I need people opinions on the latest stranger things 3rd season before I commit!?

Do you realize the Steelers report to St. Vincent College in 20 days? That’s less than three weeks!!

We took a hiatus from the Steel City Blitz Steelers Podcast this week due to the Fourth but we’ll be back over the next few days. Please keep listening and if you can, rate us on iTunes!

I saw a tag line this week on article for ESPN about the AFC North. It said, “Can Big Ben Revive the Steelers?” Now I’ll be the first to admit that Ben needs to play better at times but was he really the problem? He’s the one who needs to revive the Steelers? I honestly don’t get it sometimes.

Have a great Friday Steeler Nation! 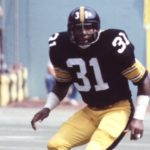