Good Monday To you Steelers’ Fans!

For the first time in several weeks we wake up to a loss. It’s never easy but it was bound to happen and Denver has never been an easy place for Pittsburgh to win. That makes yesterday that much more difficult to take. This game was there for the Steelers to win. Many, many times too. And that leads me to some hard truths.

If you need a scapegoat for the loss do not look at Mike Tomlin very long. I can question why he OK’ed an offensive gameplan that was so pass dominant but he didn’t fumble at the goal line, fumble in the red zone or throw a pick in the end zone. This one was on the players but let’s start with some questionable coaching calls however.

First, the play design and execution on the Xavier Grimble Play was terrific. Grimble clearly did not know if he wanted to ‘juke’ the defender or ‘run though him.’ He did neither and got rocked resulting in the fumble. I have to ask however, why use Grimble there? Why not Jesse James or Vance McDonald? Still, that was on Grimble.

In no way do I take the blame for Big Ben’s end zone interception away from him. Bad throw, bad choice etc. But I hate the run-pass option (RPO) there. The linebackers have nowhere to go because the end zone is right behind them. Even if you fool them it’s only for a step or two. There were many other options there but make no mistake, that throw was on Ben.

1 loss after 6 straight wins and yinzers are acting like the season is over. Lmao

I love James Conner but not even he can escape the wrath… he is putting too many balls on the ground. His fumble yesterday was bad and he knows it. Has to take better care of the football.

Kudos to Chuks Okorafor. While the Western Michigan rookie tackle had help, he did a damn fine job against Von Miller.

58 passes and 16 runs against one of the lesser run defenses in the NFL. As good as Ben was at times that’s too much. Have to establish some semblance of a running game.

Terrell Edmunds is not where I hoped he’d be. Too many poor angles and his coverage is lacking.

What more can you say about JuJu Smith-Schuster? The kid shows up every single week. In the same breath, if James Washington keeps running rather than diving he scores a TD.

I probably say this every week but I don’t care. Vince Williams, whether he gets beat or not, plays hard EVERY SINGLE PLAY.

T.J. Watt and Bud Dupree were both pretty invisible yesterday and that’s something that happens too often. Watt typically finds a way to make a play but these two (broken record) have to make more of an impact week-to-week.

As good as Keith Butler has been in recent weeks I think he struggled with his play-calling yesterday. Too many run blitzes often left the defense exposed and I have no idea what his goal line defense was doing either. The Broncos did an excellent job of isolating their receivers on guys like Jon Bostic and Coty Sensabaugh. Bostic has been great against the run but he’s liability in coverage. This isn’t anything new.

Antonio Brown had a tremendous block on JuJu’s touchdown. Go back and check it out because you may have missed it in the initial replays.

Danny Smith, often the bane of my existence, had an up and down day Sunday. His fake field goal design was excellent and the players executed it perfectly. How he did not catch the Broncos’ field goal block on tape is beyond me. You have to be prepared for that.

OK, not the end of the world Steeler Nation. Back home to the Chargers! 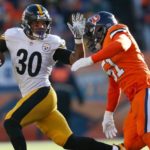 If you watch the blocked field goal they pulled a nice 3 on 2. One guy push the center straight down, the next guy crashed the guard and the third guy jumped the gap. Hines Ward would be an awesome mentor for Washington, he needs one. And that last pass should have went through the goal post. If you watch the play closely it was doomed from the start.