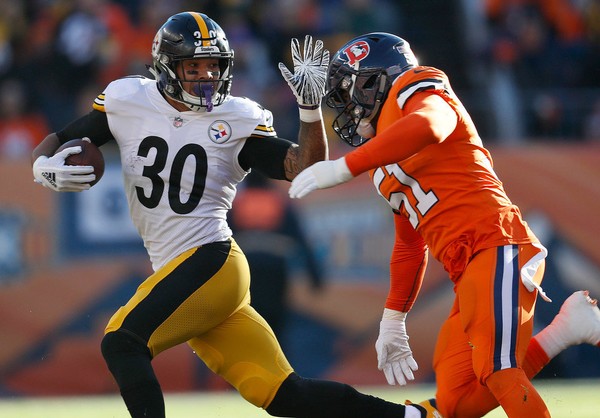 Riding a six-game winning streak the Pittsburgh Steelers went into Denver and did many things well. Taking care of the football was not one of them however as they repeatedly shot themselves in the foot in losing to the Broncos 24-17. The most egregious of all came at the end when Ben Roethlisberger was intercepted by a defensive lineman at the goal line. It was the perfect culmination to a comedy of errors that cost this team a victory.

After having a field goal blocked, the Steelers fell behind 3-0 but a brilliantly called and executed throwback to Xavier Grimble resulted in a fumble out of the end zone. Quite frankly Grimble should be released immediately. He had all the momentum and just needed to lower a shoulder or make one move but instead he allowed himself to get decked by the Denver defensive back causing the fumble. It was embarrassing and un-Steeler-like.

In the third quarter, James Conner inexplicably lost the ball on a big gain deep in Denver territory. The Broncos turned that into seven points. It was the second straight blunder for the promising second year running back. Last week he dropped a sure game-winning touchdown but was able to overcome it when Roethlisberger scored shortly after. Today there was no redemption for him. He has to do a better job of holding onto the ball period.

This was not entirely on the offense however. The secondary looked much like they did in the earlier part of the season. At one point there was a very testy exchange on the sideline between Coty Sensabaugh and T.J. Watt. In other words, get ready for more discussion about “communication issues.” I think rookie Terrell Edmunds has some guilt in this too. His play at this point in the season is not what it should be as he’s missing assignments and taking poor angles.

I predicted earlier in the week that this Steelers would lose because it just felt like they were due for some bounces to go against them. I certainly didn’t see this many however.

There should be serious questions about Randy Fichtner’s gameplan. Ben Roethlisberger threw 58 passes. The Steelers ran the ball just 16 times against a defense that ranked 27th against the run. While one can argue that Big Ben threw the ball well, and he did, there was absolutely no reason for this disparity between the run and the pass. There should also be questions about Fichtner’s red zone calls which had been pretty good until today. Make no mistake, the Roethlisberger interception was all on him. Even if the Broncos’ D-Lineman hadn’t picked it off the cornerback on Antonio Brown would have. It was that bad of a pass.

The shining moments of today were JuJu Smith-Schuster who became the first player in NFL history to have two touchdown receptions of 97 yards and Alejandro Villanueva. The Pro Bowl tackle caught a touchdown pass from Chris Boswell on a beautifully run fake field goal at the end of the first half. One could also say the performance of rookie Chuks Okorafor was a bright spot as well. He did an excellent job with all-pro pass rusher Von Miller in his first career start. Yes, he had a lot of help at times but showed himself quite well.

Pittsburgh now finds itself in the fourth spot in the AFC playoff race pending the outcome of Houston’s game against Tennessee tomorrow night. Should the Steelers end up third of fourth they will likely look back at what might have been in this game. Being shot in Denver isn’t new to the Steelers, but shooting yourself was a bit more troubling with so much on the line.

Quite simple at the end of the game you run the ball the first two plays then take shots, Just to work the clock down. Why can’t Grimble just run the DB over? Why is Washington leaving his feet to catch take pass? Why is Connor leaving his feet? Why does Ben keep forcing it to Brown [ the league knows this by now] ? I think most of the plays were fine but just way too many mistakes. Championship teams don’t play this way. We only scored 1 offensive TD with 500 yards of offense.

I think it’s ironic that Ben wears number seven in honor of Elway. I say this because as Elway got older they built the offense around the run game more. I’m not saying Ben can’t still sling it, clearly he can, but to have him drop back 58 times and only run it 16 times is just ridiculous. Ben played pretty well other than his final throw. Sadly that was the one we’ll remember.

What a shameful performance by this team.

Big Ben played like a back up QB coming off the bench.

Tomlin has too much faith in Ben. They went in there yesterday with the plan to throw the ball. And they did. It was working except for the turnovers. Ben and his turnovers this year have been absurd as hell. I can’t understand why he was so awful this year. He’s not trying to get it to Brown all the time like in the past other than the end of this last game. They just put too much on his hands though. They need to run the ball a little bit and let him he’s back and watch it happen. They put too much pressure on him and you see he fails when it’s too much pressure