SCB Steelers Quick Hitters: The “Get Ready for 12” Edition

If you look at the injury-riddled landscape that is the Pittsburgh Steelers’ offense then some conclusions have to be drawn. As it looks right now both JuJu Smith-Schuster and Diontae Johnson are unlikely to play Sunday. That likely leaves James Washington and Johnny Holton as you starting receivers. If Deon Cain picks up things quickly then that’s a real plus but that can’t be counted on and while Tevin Jones may offer some hope the fact is the offense is in trouble. That’s why I believe we will see a lot ’12’ personnel on Sunday. The Bengals have the worst run defense in the NFL and that, coupled with the Steelers’ wide receiver issues, means I think we’ll see a lot of two tight end sets. Vance McDonald and Nick Vannett are both healthy right now and they should be motivated to block better than they did last week. Whether James Conner, Jaylen Samuels or Benny Snell, Jr gets the ball it’s likely going to be out of a one back set with Roosevelt Nix still out with an injury. Using 12 personnel allows Randy Fichtner to use both sides of the formation and should able him to keep things a little less complicated for Mason Rudolph. Understand that this doesn’t mean it’s the only thing you’ll see but I tend to believe it’s the safest and surest way towards some offensive success which this unit sorely needs.

Occasionally I get asked to post some ‘odds things’ so I’m taking the opportunity to do that here. You can find some exciting live sports betting all over the internet. The Steelers head to Paul Brown Stadium this week at 6.5 point favorites to beat the Bengals. The Over/Under at the time of this writing is 39.5.

Tweet of the Day… I’m not so sure about this….

From the Injury Report

NOTES: I hope Vannett gets healthy because if he doesn’t it destroys my above premise… Diontae Johnson practicing does not mean he will play. He must still get through concussion protocol which is thought to be a losing proposition at this time… My understanding is that Tate, who was carted off the field Sunday, is more than likely not playing for Cincy.

I’m really not sure what that apology was all about on Wednesday. First of all, it looked weak. Reading from a prepared statement? Not a good look in my opinion. After calling Myles Garrett a “coward” in the postgame presser, Rudolph praised Garrett as a “great player” and holds no ill will towards him. Saying “I know if Myles could go back, he would handle the situation differently” is putting words in Garrett’s mouth and that’s something you don’t want to do. I’m of the opinion that Rudolph should have just said it was an unfortunate incident and left it at that. Let’s call it a ‘learning experience’ for the young QB. 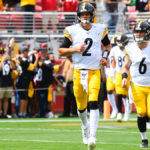 What happened to the potential fines for helmet-to-helmet that resulted in concussions for both JuJu and Diontae?