Le’Veon Bell was officially given the Exclusive Franchise Tag yesterday which means he can only negotiate with the Steelers. This does not mean a ‘tag and trade’ is impossible but it is much more unlikely. If the two sides cannot come to an agreement on a long-term deal by July 16th then Bell will play the season earning $14.5 million dollars. The fallout from this has divided Steeler Nation and has created a ton of discussion. Bell has not done himself any favors by using social media to continue his “they aren’t giving me what I’m worth” mantra. Someone needs to get in his ear and tell him to shut up. His new Billboard.com interview does nothing to help his cause either as he throws teammates under the bus for “not supporting his music career more.”

At this point, I do not see the two sides coming to a deal. I do not expect him to be at any offseason activity nor do I expect him to be at Training Camp either. While it’s possible he could sit the first ten weeks and then report for the final six games to get his accrued season, I don’t see that because it would cost him about $800,000 grand a week. It’s unfortunate and means yet another summer of Steelers’ fans dealing with his immaturity. I think this young man is a terrific player but what the Steelers have offered is more than enough and extremely fair. By the end of the season he’ll have earned about $27 million over two years. I have a hard time feeling bad for a guy who has to “survive” on that.

Tweet of the Day #1… This is why Bell rubs people the wrong way. $42 million over 3 years isn’t being wanted?

lol what more I gotta do to be wanted? https://t.co/Dq5oe5hRZ4

Tweet of the Day #2… Aditi is just the messenger here.

Just got off phone w/ one of Le’Veon Bell’s teammates. He says of that “retirement” talk, “No way does he walk away from $14.5 million.” But… he says if the RB does have to play on the tag, he can see Bell skipping a game or two. #Steelers

We discussed this and much more on the Steel City Blitz Steelers Podcast 63 presented by 26shirts.com/Pittsburgh last night.

I do not think this prevents the Steelers from drafting a running back. In fact, I think it only makes it more likely because this will be Bell’s final year in Pittsburgh. They aren’t going to tag him again at over $20 million and he’ll be 27 with a ton of mileage on his body.

Charlie Batch, whom I like very much, tweeted out a “congratulations” of sorts to Bell yesterday. While in almost all cases players stand with players it was not a good look for Batch. He works for the Steelers and I don’t think they appreciated his comment.

ryanh: Did any guys standout to you at the combine that you believe the steelers will select.
Ed Bouchette: I wasn’t there and did not watch it.

He wasn’t there and didn’t watch it but yet we are supposed to be “informed” by him about potential draft picks? Nice. 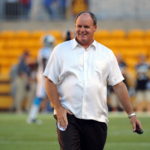