SCB Steelers Quick Hitters: The “Fake That Shouldn’t Have Been” Edition

Sorry to throw some shade on our otherwise sunny Steelers’ world this week but I can’t seem to let this slide. The fake punt on Sunday is bothering me in a number of ways and while I appreciate how Mike Tomlin has taken the arrows for his players and coaches the truth is this; he’s 100% responsible. Here’s why. With a little more than eight minutes to go, the Steelers faced fourth down with a ten point lead. The Steelers has worked all week on a potential punt fake but only if the Cardinals presented the right look. The fake appeared to be on but as best we can tell, Jordan Dangerfield called it off and everyone got the message except for Jordan Berry. The Aussie was lit up like a Christmas tree and fumbled but Trey Edmunds was alert and jumped on the ball. The Cards would eventually score a touchdown to pull within three. The truth is that Mike Tomlin and Danny Smith both screwed the pooch here. There is no way, I mean “no way,” a fake should have been called here. Tomlin and/or Smith should have made that abundantly clear to the unit going on to the field. But they didn’t and catastrophe then ensued. While it did not ultimately cost the Steelers it’s the type of poor communication that against better teams will cost the Steelers dearly. I’m all for putting your opponent away but a fake there was as dumb as it looked and Tomlin and Smith were the culprits.

The NFL is investigating the Patriots once again for allegedly filming the Bengals’ coaches giving signals during their game Sunday in Cleveland. New England claims they were filming one of their scouts for a documentary but several sources have already stated the tape contained video of the Cincinnati sideline. If this turns out to be the real thing -and the tapes haven’t been destroyed already – then this could be devastating. The already tarnished crown jewel of the NFL would face even more scrutiny and doubts about them would grow larger. [Update]: The Patriots have apparently admitted that they ‘accidentally’ filmed the Bengals’ sidelines.

Tweet of the Day… Interesting take by Ramon. Pats’ fans like to use “the Steelers were on ‘roids in the 70’s” argument to justify Spygate. The problem is that ‘roids weren’t illegal then. All players had access to them not just the Steelers.

Ramon Foster on Patriots: "I really hope they're not playing afoul like that because if that's the case, I think that's bigger than steroids, HGH or anything else like that. You're slanting a game and you're not giving both sides of the ball a fair competition. That's 'if'."

As per usual Mike Tomlin will speak to the media at Noon Eastern today. I’m most curious to hear about JuJu Smith-Schuster’s potential return to the lineup on Sunday night. The players as per usual are off today.

I think the fun and enthusiasm surrounding Duck Hodges is awesome. He’s a likable guy who is maintaining a level head through all of this and is performing well despite mounting attention and pressure. I guess since I’ve already been ‘Scrooge’ today in my earlier piece on the fake punt, I’ll continue it here. I do not see Duck as a future starter in Pittsburgh or anywhere else. The size and arm strength just aren’t there and as more and more tape gets out teams will start limiting what he can do more and more. That said, I think Duck can have a terrific career as a spot starter and backup QB in the NFL. The knowledge and experience he’s gained this season is invaluable and I for one hope he continues this amazing run he’s on. 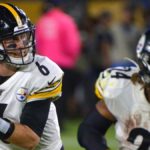