Good Tuesday to you Steelers fans and you’ll note this is the first time in 12 weeks it hasn’t been a “victory” day so all in all that’s not too bad. However, there is lots of “bad” to discuss as I break down last night’s 23-17 loss to the Washington Football Team.

-Mike Hilton is a helluva player. He saved the Steelers’ D several times last night with pass break ups and terrific one on one tackles.

-T.J. Watt is getting closer and closer to cementing the Defensive Player of the Year Award. Everything he does is incredible and even more so because he’s held nearly every play.

-Alex Highsmith did not make any splash plays last night but he did his job and pressured the QB on several occasions. For a rookie making his first start I’d say this is a positive sign moving forward.

-The Steelers officially tied the Tampa Bay Bucs with their 69th straight game with a sack. It came in the first quarter when Robert Spillane sacked Alex Smith.

-James Washington needs more touches. At the very least he needs more opportunities to make plays especially with other guys dropping the ball so often.

-I suppose, in a weird way, losing may help this team. Personally I don’t think it does but perhaps the offense was feeling the pressure of remaining unbeaten and that led to the errors of the last few weeks.

-Ben Roethlisberger hasn’t been perfect but he’s been more than good enough. Imagine his completion percentage were it not for all of the drops. I fear however, too much is being put on that surgically repaired elbow. This was not the offense I envisioned but it’s what has had to develop.

-Matthew Wright did what was expected. Made his two PATs and knocked home a field goal. Not a big leg by any stretch but he did what was asked.

Tweet of the Day… The rookie suffered his first loss as a professional last night so I’m going to give him some room here but… when someone doesn’t play well, I’m saying it.

We seeing who the real fans are tonight . How you supposed to be a fan and you talking shit on your own players??pathetic ?

-There was a point last night when there was no Joe Haden and no Robert Spillane on the field in the second half. Also missing were Steven Nelson, Bud Dupree and Devin Bush. That’s four starters and a key reserve. You just can’t continue to take hits like that and hope to keep a high level of play.

-I never dreamed in my lifetime that I would see the Pittsburgh Steelers unable to get a yard on so many occasions. It’s just sad. There’s no push on this offensive line and the tight ends can’t block to save their lives.

-How many more times are we going to see a draw to Benny Snell on third and long?

-I’m at a loss with the dropped passes. Maybe Eric Ebron should spend less time running his mouth on social media and worry about catching the ball.

-Holding in the NFL may as well not even be a penalty anymore. It’s a total joke what doesn’t get called.

-Cam Sutton has to keep his feet in coverage more often. I counted three different times he fell to the ground and two of those instances could have been interceptions.

-I said it last week and I’ll say it again, Diontae Johnson will not get a second contract in Pittsburgh if he can’t catch the ball more consistently and run the correct routes more often too. No one cares how well you run routes if you can’t catch the ball.

-If you want to make yourself ill, go back and watch the failed fourth and goal play. That was a matter of one thing. One group of guys wanted it more than the other. Nearly every Steeler on the line of scrimmage got beat.

-Say what you will about James Conner being a number one back or not but he was missed last night. From blitz pickup to catching passes and getting yards, his absence was glaring last night.

-Danny Smith’s Special Teams unit have regressed. Early in the season they were tackling well and they were avoiding penalties. Not so in recent games.

-My only comment on the officiating is this. First, the end of the half was an abortion. No way that can happen in an NFL game. Smith should have been flagged for delay of game. It was no different than when a player kicks or rolls the ball away from where he was tackled. Second, the hold on Watt on fourth and goal was nothing short of a bad joke. The WFT did the exact same thing on the other end and it wasn’t called. Those two things did NOT lose this game for the Steelers though.

The Steelers now turn their attention to the AFC leading Buffalo Bills who went west last night and stomped on the 49ers 34-24. At this point, we have to see where the Steelers are in terms of injuries. How is Spillane? What of Joe Haden? Will Conner return and what about Boswell? Just as importantly though, how does this team respond after their first loss of the season? 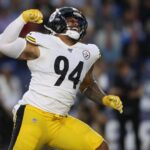 I being a Tomlin fan since day one,but I feel that there was a few bad decisions made on the play calling and decision making last nite.