There he stood at the podium looking like a guy in an infomercial ready to get started making his pitch. In a sense, that’s what Kevin Colbert was doing yesterday in his annual Q and A with reporters at the NFL Combine. He was making a pitch, several pitches actually, that could have easily been viewed by many as putting the Steelers’ GM in a bit of a conundrum. How much should he actually divulge about other teams’ interest in Antonio Brown? Say too much and doubts are raised. Say too little and doubts are raised. So Colbert did what he could to state the status quo. He made this trip to Indianapolis sound much more like a fact-finding mission than a place to swing the actual trade of the disgruntled all-pro receiver. Honestly, that’s what it is. Colbert is in Indy to gauge the interest of teams, to compare offers and to play them against each other in hopes of creating a bidding war. No one, no matter how much they claim to know, has any idea of what the going price will be. A first round pick (and maybe more) seems logical. But perhaps a second rounder may be all that is offered. At the end of the day it will at the very least show just how much the Steelers want to move on from Brown despite Colbert strongly suggesting that they won’t move him if the price isn’t right. Boy what a summer that would be.

Tweet of the Day… Pretty sure I had this one. Probably right next to Farrah or Christie Brinkley.

About that ‘drama’ thing… I’ve been doing this long enough to understand that the truth about many things is often found somewhere between the extremes. Colbert said yesterday that he believes the entire ‘drama’ thing was overblown and I agree to a point. Was it as bad as the media and even some players made it out to be? Probably not. Was it worse than some media and even players made it out to be? Probably not. There were locker room issues period. Some going back to the National Anthem situation, some surrounding loyalties to Le’Veon Bell and certainly there much ado about Brown. Perhaps over time we’ll find out just how it all really was.

Today the Combine really begins. Measurements, which have become every bit as important as the 40 yard dash and bench press, will be taken today and all eyes will be on Kyler Murray’s height, weight, hand size and likely what cereal he liked as a kid. Ya… some of the questions these guys will get are downright nuts.

I’m keeping a close eye on Devin Bush. I have him as a late first/mid-second round linebacker. Speed, effort, tackling are not a problem. Size is what concerns me. He gets caught up in the wash a bit too much for my liking and his ability to get through oncoming guards and tackles may define whether he’s an every down LB or just situational. Keep an eye on his measurements. 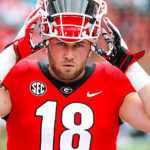