I was supposed to be discussing the result of the Steelers’ game in Tennessee today but instead I am not. At last count, the Titans’ organization had at least 16 people with with positive Covid-19 tests. Eight of those are players. This of course led to the re-scheduling of the game for week seven. With many of us planning for a much later BYE week, this development led to many of us stuck in limbo. Admittedly, I got some work done both inside and outside of the house and enjoyed some college and professional football on a relatively inconsistent basis. Therefore I did get a bit of a football fix but you don’t need me to tell you that’s not the same as having our Steelers. It was in fact, quite a boring weekend.

Around the AFC North Yesterday

It was bad enough that our Steelers weren’t able to play but then the other teams in the AFC North decided to make it worse by winning each of their games. Joe Burrow and Cincinnati got their first win of the season by beating Jacksonville 33-25. The Ravens dispatched the Washington “Football Team” 31-17 and the Browns went into Dallas and held off a furious fourth quarter comeback to win 49-38. As poor as the Cowboys’ defense is, we have to take note of the Browns’ offense. It was clicking on all cylinders and is a reason I selected them as one of the wild-cards. While their defense gave up a lot of passing yards, their pass rush is better too.

Tweet of the Day… How could I pass this up?

We are officially in the fourth quarter of 2020. Man I hope we are playing the Falcons.

I don’t think there’s going to be any doubt that the Titans screwed this whole thing up. The more we here about how all of this developed last week, it certainly seems that the organization did not follow the protocols established by the NFL. If these things prove to be true then the NFL must come down hard on Tennessee. Slapping them with a fine isn’t enough. The loss of draft picks needs to be involved here. This hasn’t just cost the Titans, it’s cost the Steelers a lot too.

Philly got its first win of the season last night beating San Francisco 25-20. Next week will not be easy despite the Eagles’ offensive line being a mess with injuries. I expect the Steelers to win, especially with some rest behind them but I won’t be surprised if Carson Wentz causes them some problems early on. 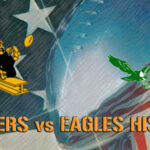