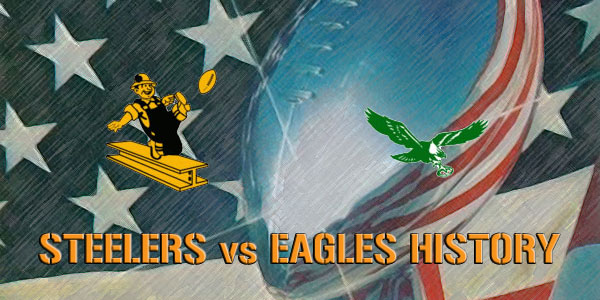 The Philadelphia Eagles and the Pittsburgh Steelers joined the NFL in the same year and over the subsequent years, the Eagles have dominated the Steelers although in Pittsburgh, the record is more evenly balanced at 18-19-1. 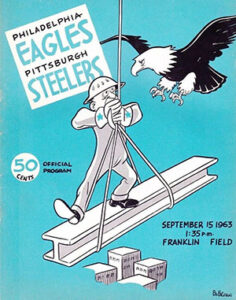 The one tie in Pittsburgh was a 20-20 game played in 1963 when the Steelers played three games that finished tied that year. The season opener in Philadelphia finished 21-21 when Lou Michaels kicked three field goals but missed two point-after-attempts that would have given the Steelers the win. John Henry Johnson caught a 11-yard touchdown pass and dived over for another 1-yd score for the other points.

On November 24, the (6-3-1) Steelers drew 17-17 with the (9-1) Chicago Bears. It was a game that Dan Rooney regretted the team had to play. It was the Sunday following the assassination of President Kennedy and Mr. Rooney wanted the game postponed, but the NFL decided to go ahead with their schedule.

The following Sunday, the (2-8-1) Eagles traveled to (6-3-2) Pittsburgh. The Steelers were unbeaten at home and still had a slim chance of making the playoffs while the Eagles had nothing to play for except the bragging rights in Pennsylvania.

Philadelphia built a 17-3 lead going into the final period as they cashed in three Pittsburgh interceptions and a fumble that led to two touchdowns and a field goal.

Half back Gary Ballman, who was the Steelers third round draft pick in 1962, had flourished late in the season. His fourth quarter touchdowns against Cleveland and Washington had provided the Steelers with the wins that had put them within touching distance of the playoffs.

On the third play of the fourth quarter, the Steelers began their fight back. Ed Brown hurled a 57-yard pass which Ballman collected and danced down the left sideline for a score.

Lou Michaels missed a chance to reduce the Steelers deficit when he failed on a 43-yard field goal attempt before the Eagles made it a ten-point game with a successful 40-yard field goal.

Ballman ran the ensuing kickoff back to Philadelphia’s 40-yard line. Four plays later Brown found Ballman in the end zone with a touchdown pass of 8 yards to move the Steelers within three.

The Steelers were denied a win when their final drive stalled on their opponents’ 16, but Michaels kicked the field goal that gave Pittsburgh the tie.

When approached after the game and asked what he was thinking about when he lined up to kick the crucial field goal, Michael responded, “I was thinking of two things. Keep my eye on the ball and follow through.”

“We did everything wrong, gave them every break and we still came out good,” suggested Steelers coach Buddy Parker.

The Steelers were on the wrong end of a blown call in the second quarter according to frustrated wide receiver Buddy Dial. He was ruled out of bounds after catching a 55-yard pass. “I was in bounds in the end zone,” insisted Dial. “Don Burroughs (Eagles defensive back) said I was out of bounds and the officials took his word for it.”

The Steelers played their season finale in New York and with a win and losses by Cleveland and St. Louis would have won the Eastern division. They were still the Same Old Steelers and lost 33-17.