Good Thursday to you Steelers’ fans!

Yesterday was the first official day in which NFL teams could place a Franchise or Transition Tag on players. The Steelers have not used this since they used it (Transition) on Jason Worilds in 2014. Obviously the discussion this time around centers on Le’Veon Bell who is scheduled to become an unrestricted free agent when that period begins next month. I believe the Steelers will use the “Non-Exclusive” Franchise Tag on Bell which means he could negotiate with other teams but the Steelers could match any offer and if they chose not to, they would get two first round draft picks in return. It’s unlikely any team would be willing to part with those picks.

Cnic and I discussed this issue and more on the Steel City Blitz Podcast Sponsored by BodyTech Gym last night.

The Steelers signed their first ‘unrestricted’ free agent of the offseason yesterday. Linebacker Steven Johnson, who only played in six games last season, will return. Some of his lack of playing time was the result of an injury but also because of the logjam of guys at the linebacker position. Making the team will be no guarantee but his year’s experience will give him an advantage.

Every so often I run across someone who completely disagreed with the Steelers’ choice of Javon Hargrave rather than Baylor’s Andrew Billings. To be fair, Billings was a non-factor in his rookie year due to an injury but how anyone could come away unimpressed with the performance of Hargrave is beyond me. This kid is on track to do some great things for the black and gold.

Something to consider in AB’s contract talks… The franchise tag for wide receivers is likely to be close to $16 million. If the cap exceeds 170,394,000, and there’s a decent possibility that it will; the WR franchise figure will exceed $16M. Consider that A.J. Green already makes $15 million per year and it becomes very likely that AB is closer to that “16 number” than we may have thought.

Someone suggested the Steelers should sign Josh McCown rather than bring back Landry Jones. Here’s why that doesn’t make sense. So you want a guy, likely in his last season of football, to come in, learn the offense AND get paid more? I’m no fan of Jones but he’s been in the system for four years and will likely be cheaper. Now if you’re talking Nick Foles or Brian Hoyer? Then I’m listening. 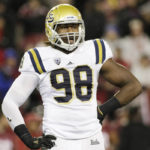 One thing that certainly holds the Steelers back is this notion that we have this complex system that takes years to learn. That isn’t true on all three phases of the game. And if the team and it’s fans continue to live in this fantasy it’s only going to make becoming a better team harder. “sometimes it is that simple”