For the first time in over 40 years I will not be parked in front of the television on Super Bowl Sunday. I’ve always been a Steelers’ fan first but I’ve also been a football fan too but since the Black and Gold made a quick exit last week I really haven’t cared. I didn’t watch a single snap of football yesterday. But then penalty difference in the AFC Title game…. Then I saw a photo of an official hamming it up with Patriots’ players after a score…. THEN I saw an official be the first to congratulate Tom Brady when the game ended…. I never thought in my lifetime that I’d get to a place where I truly believed that officials would so literally affect who played in the Super Bowl and who wouldn’t. I have no desire to learn anything about these teams and even less of a desire to watch what used to be one of the great events each year. The 52nd playing of this is boring to me. I hate this is where I am but it’s the truth. Bring on the combine and the draft and free agency.

Reports came out yesterday that Todd Haley could be the next offensive coordinator of the Cleveland Browns. I’m told that Haley has no plans to move from his home in Pittsburgh mostly due to kids being in school so of all the places he could go this makes the most sense. Of course this does not mean he won’t make sure there isn’t a ‘Tequila Cowboy’ in Cleveland though.

Tweet of the Day… Someone is clearly enjoying the time off.

I still believe that once the Steelers are done coaching in the Pro Bowl that there won’t be changes to the defensive staff. I still cannot fathom how there could not be even one, single change.

If you could, please make sure you give us a ‘like’ on our Facebook page and please give us a solid rating on iTunes as well for the Steel City Blitz Podcast. Thanks!

Thinking WAY ahead…. The Steelers squandered two really easy travel seasons in back-to-back years. Now they have to go on the road in 2018 to both Oakland and Denver. In the last two seasons they’ve never played outside the central time zone.

Lots of speculation about Cam Sutton moving to free safety. There are some positives and negatives of that for sure. This assumes of course the Steelers stay with top three corners of Artie Burns, Joe Haden and Mike Hilton.

As best you can, enjoy your Monday Steeler Nation! 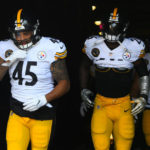 I think it’s absolutely LUDICROUS that the NFL thinks that we fans are so stupid and so blind that we don’t see how the refs treat the Patriots! They just keep going along, trying to convince us that we are not seeing what we KNOW to be true: that the NFL has been helping the Patriots to win games all year long. I don’t know who is in charge of this scam, but as far as I am concerned, if the Patriots win the SuperBowl this year, I will not recognize them as the TRUE champions.