The possibilities for a Steelers’ win on Thanksgiving night in Indianapolis have improved over the last 24 hours. Colts’ QB Andrew Luck is in concussion protocol and as of right now it doesn’t look like he’ll play. He took two vicious shots to the head against the Titans Sunday including one where his head slammed the ground. His back-up is Scott Tolzein. As always however, the Steelers can’t take any young, unproven QB lightly.

Besides Luck, the Colts’ secondary is also banged up as well.

Don’t forget! ‘Nail the Number‘ entries are due by 8pm ET tomorrow night!!

Let’s be honest; the Steelers don’t do anything “easy” when it comes to playing on the road but if they can’t win a game with Andrew Luck out against a beat up secondary and with ideal conditions inside a stadium likely packed with Steelers’ fans then they don’t deserve a postseason berth.

The Colts’ Defense is very similar to the Browns in terms of rankings although they are better against the run. With good conditions and a fast track I wouldn’t be surprised to see the Steelers come out throwing.

Kind of surprising but Antonio Brown, who has 77 receptions, is only two off the pace through ten games that he was the last two years. I’m not positive but the yardage has to be noticeable less though.

It’s tough to draw any conclusions from what the Steelers’ D did against Cleveland because… Well, it’s Cleveland… But I thought the outside linebacker rotation seemed to work well. If it wasn’t Harrison getting pressure it was Moats. Even Jarvis Jones and Anthony Chickillo had some moments where they got pressure as well.

One of the big things I’m watching Thursday night is the red zone offense for the Steelers. The Colts give up almost four red zone scores per game defensively but they are decent at limiting those to field goals. Steelers need to break through. 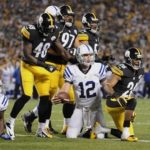