Good Wednesday to you Steelers’ Fans! From Here, it’s all down hill to the Steelers and Jaguars!

I have no problem admitting that I piled on yesterday when it came to Antonio Brown’s sideline temper tantrum but only because both Ben Roethlisberger and Mike Tomlin addressed it. Was AB’s fit unprofessional? Yes it was. He acted like a spoiled brat who wasn’t getting his way. It should have ended there but Roethlisberger felt the need to comment on it during his weekly show on 93.7 The Fan. Big Ben will always be one of my favorite Steelers but this is another example of keeping things in the locker room. In Tomlin’s defense, he was asked a direct question during his press conference and didn’t avoid it. This issue should be a dead one and I hope it is. There are more important things to be worrying about.

The Indianapolis Colts released former Steeler Sean Spence yesterday. I would quite honestly be happier with Spence than I would Steven Johnson who the Steelers cut and bring back at a Bill Belichick type of rate.

At the current rate, I think Ryan Shazier is headed for an all-pro selection. He is a defensive game-changer that teams just can’t account for. Speed kills but so too does the ability to see things before they happen and Shazier has that knack.

Had a great time with @ProjectBundleUp Just happy to be able to give back! pic.twitter.com/WJlVeUoM6u

Ian will join me for a special edition of the Steel City Blitz Podcast presented by 26shirts.com/Pittsburgh tonight. We’ll be breaking down the WPIAL as we head into the final weeks of the season! Where did the season go by the way? Sheesh!

One thing that should be noted about this week’s opponent, the Jaguars, is that they’ve been on the road A LOT lately. Since September 10th, they’ve played just one game in Jacksonville. They’ve been to Houston, London to play the Ravens, then to New York where they lost in overtime to the Jets. Now they are coming into Pittsburgh. Sometimes these things mean little but quite often they tend to add up.

It’s hard to say what the feeling would be like in Pittsburgh if the Penguins were just another competitive team. Truth is, they are the back-to-back Stanley Cup Champions and their amount of drama is far less than what we deal with when it comes to the Steelers. I’m jealous of that and have no problem admitting it.

Looking forward to the injury report today. Jacksonville leads the NFL in sacks with 18 through four games. Marcus Gilbert being back would be a huge lift for the O-Line. 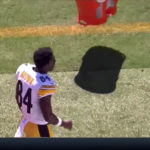