That’s right! After two weeks of Training Camp the Pittsburgh Steelers will finally play a game. OK, so it’s preseason but it’s still game isn’t it? On Friday, August 11th, the Black and Gold will lace ’em up in New York against the Giants. What you can expect is quite simple. Plan on seeing starters briefly to not at all. Preseason games one and four are almost exclusively free of starters and top players. That does not mean we won’t be watching that’s for darn sure.

I’m a little surprised at the “amazement” that Tyson Alualu is bringing to the Steelers according to some reports. This guy is a former first rounder and eight-year veteran. In other words, he’s been around the block a time or two so I’ surprised by what he brings to the table at all.

The latest injury issues… Artie Burns was dinged up at the Friday Night Lights practice and right now it’s the one that concerns me the most. Mike Tomlin says “it’s minor and Burns is in good spirits.” I feel better once Burns is back out there… Even before he tweaked his ankle, I did not expect to see Ben Roethlisberger on Friday…

What a sight seeing Big Ben and James Harrison enter Heinz Field in each other’s jersey while mocking the other’s entrance last night.

Tweet(s) of the Day… This is great. I remember clearly when Da Beard was penalized for his archer pose following a sack against the Chargers.

Get in line young fella ? https://t.co/gc3HuKFQfM

As expected, the Miami Dolphins signing Jay Cutler elicited the usual firestorm of social media stuff about Colin Kaepernick. Again, let me say, Kaepernick had every right to exercise his first amendment freedoms when he chose to kneel for the National Anthem. Choices have consequences however and even when we do things within the confines of the Constitution, that doesn’t mean we don’t still pay for them.

Fitzgerald Toussaint has quietly put together a very nice Camp for himself. That’s exactly what you want to see from a guy who knows a roster spot is anything but guaranteed. By having a strong Camp and hopefully some good preseason games, Toussaint at the very least gives himself a chance to catch on with other teams should he be released.

Ross Cockrell has been getting his opportunity to go one on one with Antonio Brown recently and let’s just say he’s been getting the same feeling that many corners in the NFL get when they play AB. Cockrell just isn’t a man-to-man cornerback. It’s that simple.

Both L.T. Walton and Dan McCullers are seeing time at nose tackle. Our crew has been torn on whether McCullers makes this roster or not. Walton is more versatile which doesn’t bode well for Big Dan. However, he could hang on to a sixth spot which still could mean he doesn’t get a hat very often on Sundays. 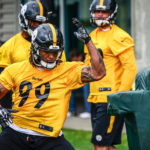 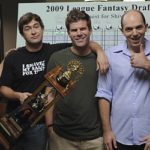