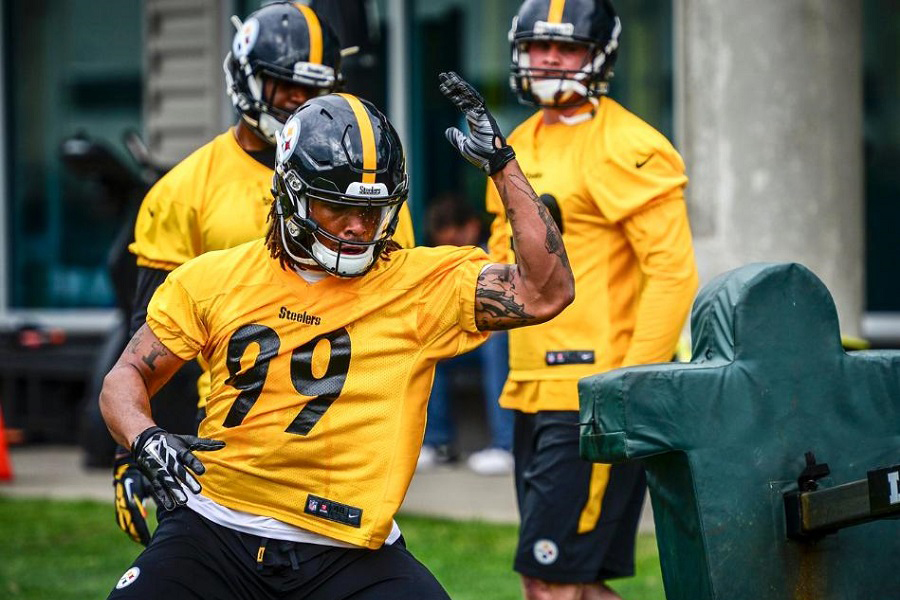 There are many precedents for late-round draft picks making NFL rosters. This weekend Terrell Davis enters the Hall of Fame in Canton as a former sixth rounder and the Pittsburgh Steelers once saw a seventh-round selection from BYU turn into a pretty damn good defensive end in Brett Keisel. For Steelers’ seventh-round choice Keion Adams, those two and certainly many others, can serve as inspirations.

Whatever the former Western Michigan Bronco is using right now it’s working because he’s gone from a guy who most thought to be headed straight to the practice squad to a guy now threatening for a roster spot.

At 6’2″ and 245 pounds, Adams was a dominating force on a Broncos’ defense that won the Mid-American Conference Title and a bid to the Cotton Bowl in 2016. He started five games as a freshman in Kalamazoo and would go on to collect 28 tackles for loss and 13 sacks in his junior and senior seasons.

Adams lacks what we would call “ideal 3-4 outside linebacker size” which is part of the reason he lasted until the seventh round of the Draft. He makes up for his “small size” by using tremendous athleticism. Adams was a three-sport star in high school and his quick feet look to be a result of his basketball prowess.

One of the most difficult things for young OLBs to learn is how to set the edge in the NFL and Adams was good but not great by the time he was drafted. As SCB’s Ben Anderson would remind me, Adams honed these skills in the MAC, not the Big Ten or SEC and that would be a fair point. To this point in Training Cap however, Adams is holding is own and is putting significant pressure on the Steelers’ coaches and I say this for two reasons.

First, Adams will come much cheaper than Arthur Moats will and Moats to this point has given us no sign that he is going to be slid inside to help with depth there. Secondly, if Adams can make plays and do his job on special teams then he strongly increases his chances of making this team. The only issue with that is that special teams’ evaluations are best made during games as teams don’t spend as much time on them during camp as they do offense and defense.

As a pass rusher, Adams has work to do. He has always gotten by on quickness and athleticism but will need to increase his overall repertoire of moves as well as his strength. Based on everything seen and heard, I see no reason why he can’t do those things.

We are still just one week into the Steelers’ 2017 Training Camp so I don’t think I, nor anyone else should get ahead of ourselves. Keion Adams is making his case however and this former Bronco is rooting hard for the one drafted in the seventh round.