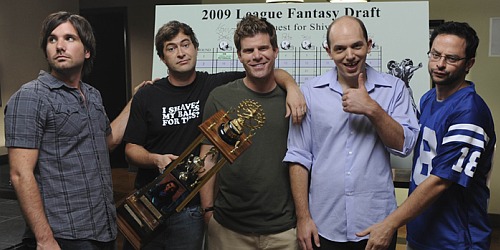 It is almost fantasy football draft season and for many readers and football fanatics, they love the game of football but have never submerged themselves in a standard fantasy football league. In this article, I’ll share some of my strategies on how to draft the best team possible to beat your friends and collect some cash. Just a little about me, I have been involved in fantasy football for about eight years now and I have been writing about it for three years.

Conjure up your own draft strategy! It goes without saying but I’ll say it anyhow: don’t go into a draft without a plan. Everyone’s plan is different and fit’s their style. If you’re brand new to fantasy football then you have no clue what I am referring to.  Here are some reasons to draft a player and deterrents not to.

Some fantasy football players use these two strategies:

BPA: Best player available. You draft the player that will score you the most points on the board regardless of position. If you’re going to do this for the entirety of the draft, might as well not even draft and let the application auto-draft for you. This strategy neglects a lot of factors that I will lay out for you when you scroll down.

Position Oriented: You draft according to positions that you may value the most and need to fill. While I do this, I don’t do this without caution. It is important to fill all your positions and at least one backup for each position.

Weeks’ Vacation.
Yes, drafting according to BYE weeks is critical. If both of your running backs have a week 8 BYE week, you will be left too thin at the position and will be throwing in a backup and saying a Hail Mary. Heck, if both quarterbacks both have the same BYE week, you can say hello to Joe Flacco. Good luck with that.

If a situation like this occurs, and it may, you will need to add a player from the free agency list. If you need to dip into this pool of players and add one, you will be forced to cut someone from your team to make room for the newcomer. Cutting a player for someone who you will only use for one week isn’t smart. Other owners can scoop up the cut player and use them, maybe even against you. Beware.

Tight Schedule.
I definitely look at the player I am considering drafting’s schedule toughness. If I am going to draft LeSean McCoy and he is facing some great run defenses, it might sway my decision away from him – or vice versa. Drafting a Patriots player is smart because they face bad defenses six times a season.

Opposing Positional Toughness.
Best way to explain this is with an example. If you’re looking to draft a WR – let’s say Amari Cooper, and he is going to be facing some seriously good #1 cornerbacks, it may sway your decision to go with another WR or a totally different position. This may work the other way as well; Cooper’s opponents with weak cornerbacks may sway you into drafting him.

Someone’s Got a Boo-Boo.
It is important to know if the player you are drafting has an extensive injury history. If he tends to miss a lot of valuable time, you may want to avoid that player. If he’s not on the field then he’s not helping your team score points. Although injuries can’t be predicted, you might want to be cautious. Always draft a handcuff. What’s a handcuff? Keep on readin’.

Helping Hand.
It is important to analyze who you exactly are drafting. If you’re drafting Ezekiel Elliot, who are you really drafting? Not just Zeke. Look at who’s helping him. He has a great offensive line, his team ran the ball 48.7% of the time, up from 43.5% in 2015. The Dallas Cowboys were also number one in the NFL with 30.8 rushing attempts per game, tying with the Buffalo Bills. Also remember your RB gets points for receiving yards and receiving touchdowns!

If you’re drafting Tyreek Hill this year, look how many times did Kansas City pass the ball last year? How many times was he was targeted, even targeted in the red zone? Who’s throwing him the ball? It may be Alex Smith, or maybe even Pat Mahomes overtakes the vet. Do you trust either quarterback? If not, you may want to go with another receiver.

Tendencies and Depth Chart Evaluation:
Like I said in the paragraph above, it is important to know how often your QB/WR/TE will be throwing the ball, or how many carries your RB should expect. Many times, there will be reports out there on how many carries a certain RB will expect to get.

The depth chart is critical for a few reasons. If a team like the Ravens don’t have a clear cut #1 running back, it may be wise to draft their backup as well (also works for injury prone players, too). This is called a handcuff. Last year, if you drafted Mike Gillislee as LeSean McCoy’s handcuff, you cherished it.

My Strategy.
I throw a little bit of each of these strategies into a cauldron and hope the end product tastes good. Many of you may say “okay, it’s really not that serious.” But I am a competitor and I really love money, so I will do what I can to gain a fair, competitive advantage. I want a dependable player who doesn’t have a horrible injury history, has a good supporting cast and I am convinced will produce for me.

Look up how your league is scored. You will see that you will get the most total points out of your QB that does not mean draft one in the first round; actually, my advice would be not to. The most valuable position is the running back position, in my opinion.

You’ll most likely be in a SNAKE draft. If you do not know what that is, I’ll demonstrate. If you are in a 10 team, the drafting order will look like this:

So if you have the 8th pick, you pick again shortly with the 13th overall pick.

If you have any questions about strategy, how I draft, how to set up a league, or anything at all, please use the comment section or reach out to me on Twitter! @cnic__

Be on the lookout for my top rankings for each position, coming soon!

Is SCB going to have a league? BTW you are right the bye week is very critical.

No official league, but a few of us are in one together. Thanks for reading, Bob!