Is it just me or does it seem like it takes FOREVER to get from the Super Bowl to the Draft?

Here are the latest things I’m hearing about the Steelers heading into this evening’s first round… Don’t be surprised if the Steelers not only trade down but out of the first round altogether. Getting additional picks in this draft could prove huge with so many defensive needs and a need for added depth on offense as well… Do not discount the Steelers taking Notre Dame linebacker Jaylon Smith who will likely miss the entire 2016 season with his knee injury. The Steelers have been keeping an eye on him since mid-season and if their doctors think the knee will be fine then he becomes a significant option… If the Steelers can get an extra pick or two I think it goes to help add depth on the D-Line.

Tweet (Facebook) of the Day… This was posted on Ben Roethlibserger’s site after pics of him playing with his kids were posted. I’m speechless and I’m hoping this is a joke.

Lots of talk about quarterbacks going higher than thought. That means Paxton Lynch and Connor Cook more than likely and if they go before the Steelers at #25 then that only helps them get the guy they want should they stay there.

I saw some stuff this week about the Steelers and the “Best Player Available” discussion that happens every year with them in the first round. Keep in mind that BPA refers to players at need positions. If Carson Wentz magically fell to 25 he’d be the “best player available” right? That doesn’t mean the Steelers would select him though.

If you missed it, here’s my annual pre-draft talk with Shane Hallam of About Sports and Draft TV.

Have a great Thursday and enjoy the Draft! 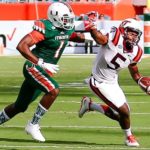