Tuesday is normally an off day for the Steelers but they took yesterday off instead. Today, the Steelers welcome the Detroit Lions for two days of joint practices prior to their preseason opener on Friday night in Pittsburgh. Practice today is at 255pmET.

Steelers’ second-year cornerback Senquez Golson underwent surgery on his foot and is expected to miss four months. I see no way Golson sees action in 2016. Perhaps, if things go well, he might be able to practice and participate on scout team but it’s another lost year for the promising player. I think Golson is down to his final strike with the Steelers.

Here’s what you need to understand about the Steelers’ first depth chart of the preseason. Don’t take anything from it. You’ll notice first of all, there isn’t one rookie listed above third team. Secondly, some of the players in front of those rookies won’t even be on this roster in a month. Bottom line? Mike Tomlin knows how to motivate and making sure the rookies know they aren’t going to be given anything is all part of the deal.

Chris G. had a great piece on the young talent on this team.

Our weekly podcast is back up and running. This past week I was joined by Cnic as we broke down all things Steelers-related.

Adversity hardens my soul
Adversity strengthens my brain
Adversity making me numb to pain
I've read the comments I'll remember as I train!

The optimism surrounding Le’Veon Bell’s pending suspension being over-turned is growing. It’s been quite a topic of conversation at Camp and in the media. Obviously, I hope his suspension is completely thrown out but I just can’t see the NFL getting embarrassed here. I’m guessing the suspension sticks or is lowered to three games.

To me, it speaks volumes about the fans and the city of Pittsburgh that Kevin Greene, who played just three seasons in the Steel City entered the Hall of Fame as a Steeler. Granted, football players do not “choose” a team to enter the Hall like baseball players do but let’s be honest; Greene’s pride on Saturday night resonated with Black and Gold.

The Browns activated cornerback Joe Haden from the PUP list this morning. He claims he has a renewed passion for the game. He’s gonna need it because his play has been average at best in recent years.

I saw Ike Taylor on a rerun of The Price of Right yesterday. That was cool… and a little odd. 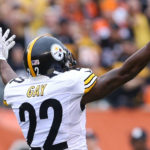