Happy Monday Steelers’ Fans if there is such a thing.

A report last week suggested Le’Veon Bell’s knee might not be as ready as we’ve been led to believe. I think it’s still too early in the process to start getting overly concerned about it but if this lingers into training camp then I would definitely start to be concerned. Don’t forget too, it is highly likely his load in camp and the preseason will be very limited anyway.
You’ll all be saddened by the fact that Pittsburgh’s soccer team lost 1-0 to Cincinnati this past weekend. Several Bengals’ players served as honorary captains. I’m sure that has to serve as some sort of ‘revenge’ right?

If you haven’t tuned in to the latest SCB Steelers’ Fan Podcast it’s right here. Chris Nicolaou of draftbreakdown.com joined me.

The Carolina Panthers have released former Steeler Brandon Boykin. They signed him to a one-year deal. Carolina paid him an $80,000 signing bonus in March.

A 9 image panorama looking north of #Pittsburgh just after sunrise, as the Allegheny winds around the North Shore pic.twitter.com/OZJAicVwJh

One of the really intriguing position battles in camp will be for that fifth WR spot. Rookie DeMarcus Ayres will have a slight edge because of his punt and kick return skills but don’t sleep on Eli Rogers. The coaching staff was very impressed with Rogers as a rookie before he was injured.

Antonio Brown has made it to the semi-finals on ‘Dancing With the Stars’ which I’m sure has SCB contributor Ben quite excited… It’s a double-elimination tonight so perhaps this is the end for AB. I’ll say this though; he’s been putting in tons of time training for football which I was worried he wouldn’t. 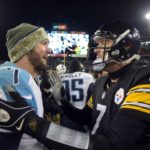 Yay!
Actually, I’m pretty indifferent toward it now. Seems like AB is training hard for football regardless of being in a reality tv competition. I guess there is an injury risk, but dancing on tv is a whole lot better than some of the dumb things players have done to get themselves into trouble during the offseason.