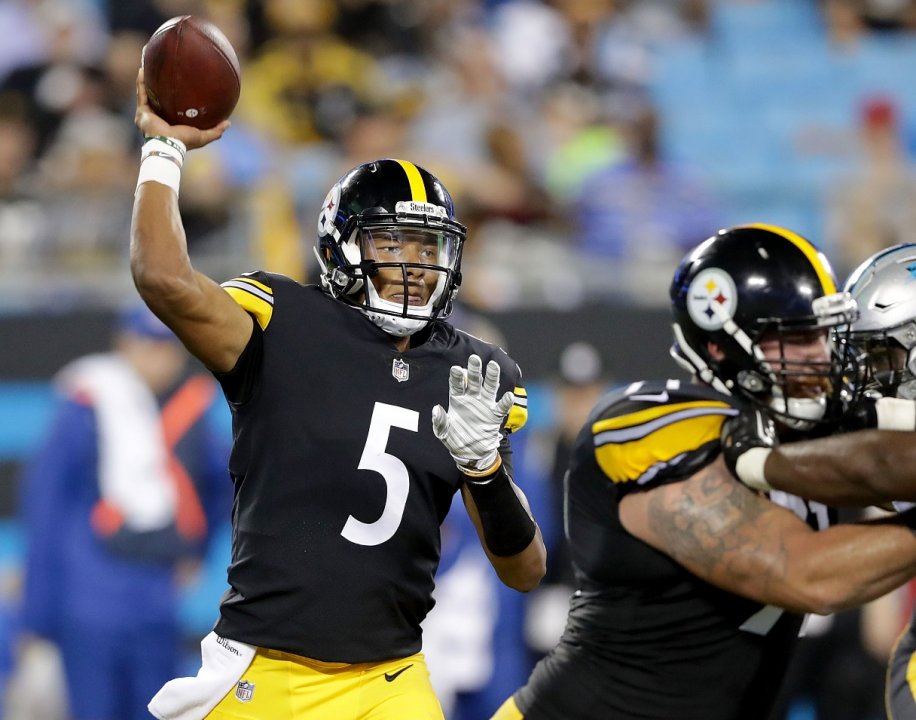 There will be nervous stomachs, coaches banging tables to keep players that they’ll eventually lose and gnashing of teeth by both players, and especially fans. Every year we go through it. The Steelers have to cut the roster down to 53 players by 4 PM Eastern on Saturday. No matter who stays on, someone, or a lot of someones, will be disappointed.

Here at Steel City Blitz, we took on the projection as a group with me, SteelDad, Chris (@Cnic__), Ian (@TheSteelersNAt) and Matt (@TheSteelCrew) all casting votes on who we thought would stay, with one big caveat. We agreed that there was little point in arguing our own preferences. We concentrated on who we believe the Steelers will keep.

I also believe that Josh Dobbs will be kept for a couple of days to gauge trade interest, if he hasn’t already been traded by Saturday. If they cannot find a trade partner, he’ll be cut and I don’t think they’ll put him on the practice squad. There just aren’t enough practice reps to give 4 QBs. The Steelers should have an extra roster spot they can use through at least Monday. More on that below.

We had some disagreement here. That extra roster spot I alluded to above is one that will eventually be taken by one Le’Veon Bell. But, not until he reports.
Le’Veon Bell – 3 votes (I kind of cheated and didn’t point out to the other guys that Bell wouldn’t be on Saturday’s roster. Ian realized it.)
James Conner – 5 votes
Jaylen Samuels – 4 votes
Stevan Ridley – 2 votes
Roosevelt Nix – 5 votes

Ian: “Le’Veon Bell does not count against the 53-man roster until he formally signs his franchise tag agreement. Last year, this happened on September 4. The Steelers are able to carry 53 other players until Bell signs his tender and is activated by the team. Last year, the Steelers did not make that corresponding move until September 9 when they activated Bell and released LB Steven Johnson (who later signed with Baltimore). This season, the Steelers could do something similar with Josh Dobbs, hoping to hold him on the roster past the first round of waivers and signings until the practice squads for all other teams are full. When Bell is activated they can release Dobbs with the intention of placing him on the practice squad unless he signs to another team’s active roster.”
SteelDad: “I believe the Steelers like a veteran presence in the RB room. Ridley knows the offense, does everything well enough and proved last season he’s more than a capable full-in. Ideally I’d like Jaylen Samuels but I think Ridley is the choice.”

Again, unanimous. There were variances in how we felt the depth chart would shake out, but the names were all the same.
Antonio Brown – 5 votes
JuJu Smith-Schuster – 5 votes
James Washington – 5 votes
Darrius Heyward-Bey – 5 votes
Justin Hunter – 5 votes
Ryan Switzer – 5 votes

Ian: “With the trade for Ryan Switzer, his roster spot is secure. Switzer being a slot guy took Marcus Tucker out of the equation for everyone. Damon Patterson’s turf toe injury could land him on the IR this season and keep him under team control. Tomlin speaking highly of Justin Hunter at halftime, coupled with Hunter bringing a veteran presence to the room, will be enough to keep him on the roster.”

There were some differences of opinion here, mainly surrounding the severity of Xavier Grimble’s injury. SteelDad went so far as to say that the third tight end is not on the roster today.
Vance McDonald – 5 votes
Jesse James – 5 votes
Xavier Grimble – 2 votes
Bucky Hodges – 2 votes
Player To Be Named – 1 vote

Chris: “Hodges has shown progression in each preseason game. He has been a reliable target, showing off he can unleash some yards after the catch. He will have to work on his blocking, but the effort is surely there.”

Ian: “Banner’s roster spot comes down to whether or not the Steelers keep 9 offensive linemen. In the past they have, but none of the second-tier guys have distinguished themselves enough to guarantee a roster spot. Banner and RJ Prince have been the best of the group and are strong practice squad candidates if they don’t make the roster. The Steelers could also look for a veteran lineman to add after other teams make cuts.”

SteelDad: “Hooks: Has been very impressive in the preseason and I believe they like his motor over that of McCullers. Frazier is an excellent PS candidate because I don’t see anyone signing him to their roster and he will only get better.”

The majority of us believe that Ola Adeniyi will be released, which none of us are happy about.
Bud Dupree – 5 votes
T.J. Watt – 5 votes
Anthony Chickillo – 5 votes
Keion Adams – 5 votes
Ola Adeniyi – 2 votes

The math at linebacker is just too great to overcome. They really like Matthew Thomas inside and Keion Adams outside. All of this said, I hope that we’re wrong and they find a way to keep him. I don’t think he’ll pass through waivers, even with an injured hamstring.

Chris: “I have the Steelers trimming down on the defensive line to make room for the 10th LB. Hargrave, Alualu and Hooks are versatile enough to play both the NT and DE positions.”

Ian: “The top four roster spots are set and Brian Allen does enough on special teams to keep him around. Sensabaugh has a high cap number and could be a candidate for cuts if the Steelers need to save some cap space. That said, he did enough in the preseason to be better than the CBs below him on the depth chart.”

Chris: “Golden would have made this roster because of his range, ball skills and tackling. It looked to be like he could play both FS and SS, but mainly FS. He was having a very good offseason with the team. I think with so much sub-package football being played defensively, 5 safeties are needed.”

This was obviously pretty simple. We knew the only possible change from last year was an addition of Matt Wile at punter in place of Jordan Berry. Mine was the lone vote that this would happen.
Chris Boswell – 5 votes
Matt Wile – 1 vote
Jordan Berry – 4 votes
Kameron Canaday – 5 votes

Ian: “Steelers coaches mentioned on multiple occasions during the preseason their displeasure with the punting unit. Jordan Berry is known for being able to pin a team deep when he kicks from midfield but he does not boom kicks when given a full field to work with when the Steelers need to flip the field. Matt Wile showed off a big leg in the preseason, averaging 49 yards per punt – 6 yards more than Berry. Notably, the Steelers had Wile holding for field goals in the second half of the final preseason game, perhaps as a test to see if he could handle those duties if a change at punter was made. The Steelers may also look at the waiver wire as a number of teams have had punting competitions which Chris highlighted in an article last week.”

Potential Competition For Chris Boswell In The...