The 2018 WPIAL season kicked off with a number of “Week 0” games last week. Those games count towards overall record but do not count towards making the playoffs (which is determined by conference record only). With Week 1 games starting tonight – many of which will have playoff implications – I got together with some of the best high school football minds around to put out our predictions for the season. Links to my conference previews are also included so you can take a deeper look at the competition.

In addition to myself, our panelists this year are:

Josh Rowntree – TribLive High School Sports Network and 93.7 The Fan. Find him on Twitter at @JRown32
Josh Rizzo – Freelance writer who has been covering high school sports for many years. Find him on Twitter @J_oshRizzo
Steve Richey – @BucFever422 on Twitter
AJ – WesternPAFootball.net contributor and author of WPIAL Football Zone. On Twitter @AJWPIAL

The WPIAL is broken up into 15 conferences over 6 classifications. Our panelists gave their predictions on conference champions as well as championship game matchups in each classification. Additionally, they provided some insight on other teams and storylines to watch.

Ian: North Allegheny, Pine-Richland and Central Catholic are the top 3 but Norwin, Mt Lebanon and Seneca Valley could make some noise. It’s a toss-up between the top 3, but I’m going with NA to win the title. They have 2 D1 linemen and a great secondary.

Rowntree: Pine-Richland is right there in the mix with NA and Central. Those three could all win a title. Seneca Valley has a lot of experience returning. Norwin, with QB Jack Salopak, is intriguing.

Ian: This class is LOADED. There are at least 4 quality teams in every conference. Defending Champs Gateway are still stacked with RB Derrick Davis + WR/DBs Courtney Jackson and Jeremiah Josephs. I’m going with Penn Hills my pick to win the title. Penn Hills has the best secondary in the WPIAL with FOUR D1 recruits at defensive back. Upper St Clair, West Allegheny, Woodland Hills, and Bethel Park all have lengthy playoff streaks and will contend for the Allegheny Eight Conference. Penn-Trafford, McKeesport, and Franklin Regional should all be in the mix with Gateway in the Big East. Don’t sleep on Mars finishing 2nd behind Penn Hills in the Northern Conference.

Ian: TJ, Belle Vernon, and South Fayette look like the teams to beat in this classification. I like New Castle, Beaver, Highlands, and West Mifflin to make the playoffs. Laurel Highlands could sneak into the playoffs in the Big Eight.

Rowntree: Belle Vernon will challenge TJ and South Fayette. Beyond that, I’m not in love with anyone in 4A.

Ian: Aliquippa is STACKED once again. My alma mater North Catholic moves up to 3A with a lot of returning talent. Derry, Keystone Oaks, and Quaker Valley will be in the mix. Ultimately, the Quips will make an 11th straight trip to Heinz but I’m going with North Catholic in an upset. Look for Beaver Falls to bounce back from a bad year last year.

Rowntree: Keystone Oaks, with sophomore QB Logan Shrubb, appear to be for real. Derry and Quaker Valley will be in the mix.

Ian: Washington may be the highest- scoring team in the #WPIAL this year. Steel Valley is strong as usual and Shady Side with Skyy Moore and Dino Tomlin will be a force. Geno Pellegrini (Charleroi) and Derek Johncour (Avonworth) will challenge for WPIAL passing title. Seton LaSalle and Serra Catholic should challenge for the Three Rivers Conference title.

Rowntree: Steel Valley will battle SSA for a spot in the title game and the conference title. Charleroi will be Washington’s stiffest competition in conference.

Ian: The Eastern Conference has the top 3 teams in 1A in Jeannette, Clairton and Imani Christian. Don’t sleep on OLSH or Rochester. California should win the TCS with their dominant ground game. OLSH is good enough to get to Heinz but with only 8 teams making the 1A playoffs it will be a tight race.

Rowntree: Clairton, obviously. They’ll give Imani and Jeannette all they can handle for the conference title. Rochester looks strong.

Ian: The new playoff structure in 6A with 6 of the 9 teams making it and two teams getting byes will be interesting. 5A is absolutely loaded with 12 or 13 good teams that could contend for the semifinals. I’m glad that the WPIAL took 16 teams for the 5A playoffs rather than putting them in a position like 3A was in last cycle with only 8 teams. In that vein – 1A goes down to 8 teams which will make the playoff races interesting, especially in the 3rd place spots. In 4A it will be all about whether or not anyone can derail Thomas Jefferson’s run to a 4th straight WPIAL title. In 2 of the 3 prior years, Belle Vernon won the conference but TJ won the WPIAL titles. Aliquippa is absolutely loaded with talent but will their new coach be able to reverse their fortunes at Heinz Field? In 2A there are a number of explosive teams offensively which should make for some quality races for conference titles and in the playoffs. With the Public vs Private school debate happening around the state, it will be interesting to see how that shakes out in the WPIAL with Central Catholic vs Everyone in 6A, North Catholic in 3A, and Imani Christian and OLSH in 1A. The biggest Public vs Private divide is in 2A where public schools Washington, Steel Valley, Riverside, Avonworth, and Charleroi will be good but will they be better than Shady Side Academy, Seton LaSalle and Serra Catholic?

Rowntree: We know this is the end of Bob Palko’s historic career. To me, he is on the Mount Rushmore of WPIAL coaches. But could this also be the finale for Jim Render at USC? He’s going to hit 400 wins. It all makes for a very interesting 5A, which will be the WPIAL’s strongest — and most fun to watch — classification. By far. Can TJ make history? Class 4A is not strong, so the door is wide open for Thomas Jefferson to win a fourth title in a row, further solidifying Bill Cherpak as one of the district’s all-time greats.

Rizzo: How Aliquippa transitions to having a new coach. In an unpopular opinion, I didn’t hate the Mike Zmijanac situation. The past two seasons, the Quips watched programs from their conference — which they had beaten during the regular season — win PIAA Class 3A titles. Zmijanac, despite piling up WPIAL titles, never did very well at states last winning in 2003. I know the situation got painted as renegade parents — and there is some truth to that I’m sure — but what is wrong with holding the program to a higher standard? Aliquippa only having two PIAA titles is shocking for the talent that has come through such a small school.

Will Class 5A still be the most exciting postseason? Re-alignment always shuffles things to some degree and it was fun the last two seasons to watch a compelling regular season and two exciting championship games. There were good teams left out in 5A because of the classification only taking eight teams. Penn Hills coming down intrigues me. If Gateway wasn’t so strong, I would favor the Indians, but I don’t think Penn Hills is that far off.

Steve:   It will be interesting to see how the new alignment all shakes out. It seems like there are a lot of haves and have nots this season 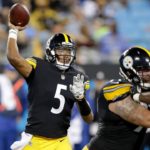