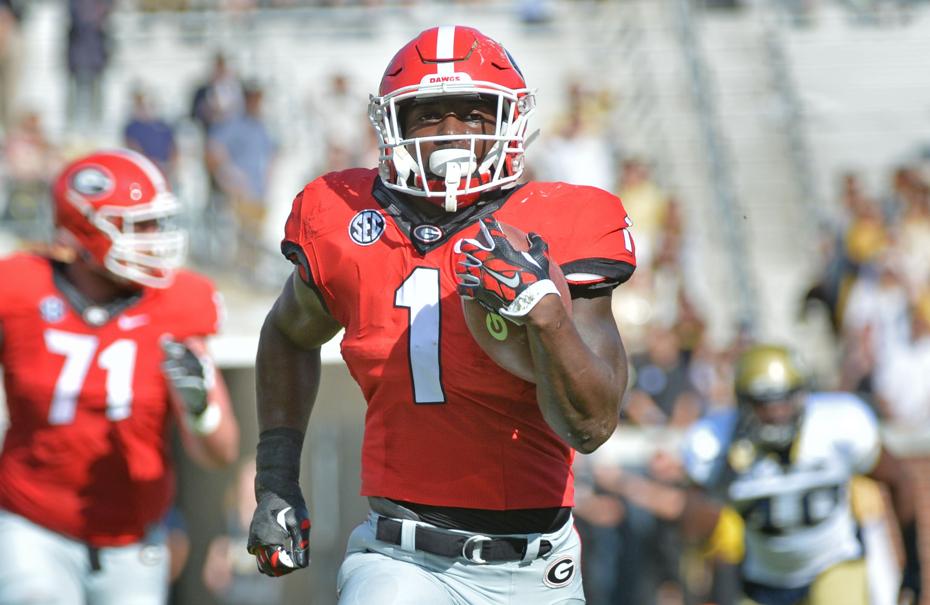 Right now, the Pittsburgh Steelers don’t appear to be in the market for a running back. That changes significantly if Le’Veon Bell is not back and/or James Conner isn’t ready to go following his late season knee injury. With this in mind, I’m looking at Georgia running back Sony Michel.

The Skinny: Michael was part of a backfield (with Nick Chubb, et al.) at Georgia that was among the most dynamic in the country.  He’s as well-built as any running back in this draft and that allows him to dish out and absorb punishment.

What’s to Like: Michel is a solid leader who twice was a team captain for the Bulldogs despite the fact he only started twice in his final campaign. He doesn’t get thrown for a loss and often finds ways to get every extra yard. He has some elusiveness that doesn’t always show up but it’s there when he needs it. Had a really good offensive line in front of him but he used that to his advantage. Sets up blocks well and showed some ability to elude guys appearing late in the hole.

What’s Concerning: His overall talent as a pass catcher is questionable. He had much more action in this area in previous seasons but he isn’t what I’d call a “natural pass catcher.” Tends to use his shoulder in almost every contact situation. Would like to see some diversity here. A stiff arm, an upper cut, anything besides constantly taking blows on his shoulder and head. While I see some ‘east-west’ success on tape I think at the NFL level he’ll be more of a straight-ahead guy.

The Verdict: Depending on his private workouts and combine success, I think he will be a day two selection in the draft and probably will go sooner rather than later. The only way the Steelers come calling is if in fact Bell has left. Pittsburgh demands that running backs be able to consistently pass block and that box is checked with Michel. I don’t think he could be the receiving threat Bell has become but I don’t see him as helpless either. What I do love about this young man is his leadership; A two-time captain who would have been THE star on any other team that didn’t have Chubb. If the Steelers were going to alter their offensive approach to more of a running attack and less throwing to RBs I would not hate this pick.