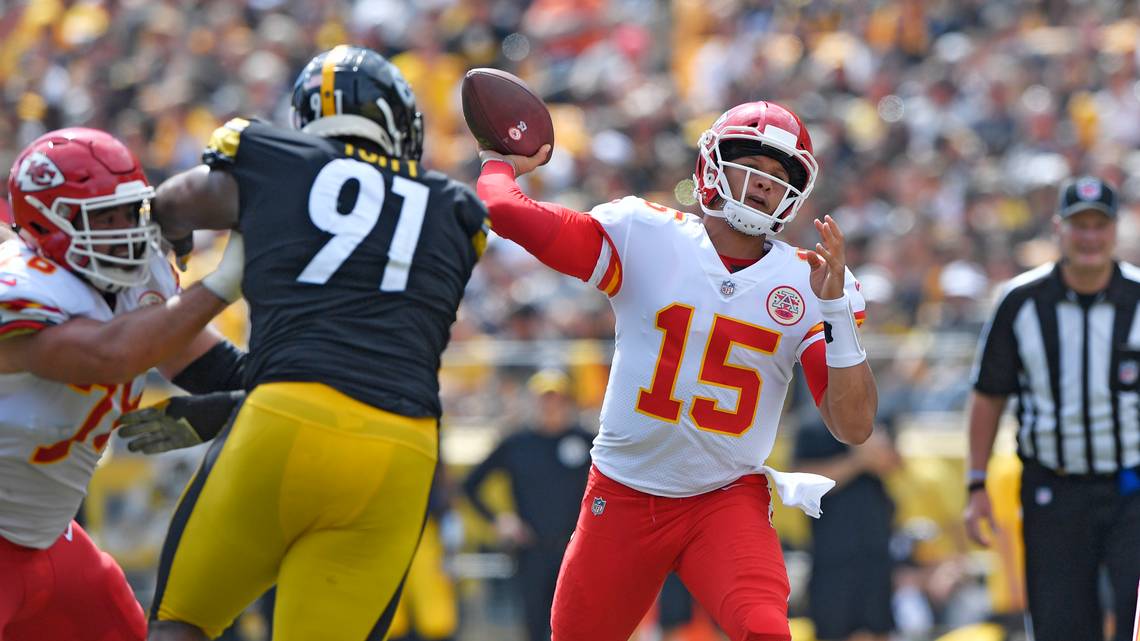 The Pittsburgh Steelers remained winless on the season with a 42-37 loss at home to Kansas City. Shootout losses are one thing, losses when you trail 21-0 before you can even blink are another. What was most evident in the three hour track meet today at the confluence was this; the Steelers have problems. Lots of problems.

Let’s start with a defense and it’s coordinator that looked unprepared and shell-shocked from the minute the Chiefs got the ball. The secondary is having the same issues it has had in recent years. There are communication problems and there are guys flat out blowing assignments. There is not one guy that played in the secondary today that should feel good about himself. There were also missed tackles to go with what I mentioned above. There is also zero pressure from the front seven.

Speaking of pressure or the lack thereof, the Bud Dupree experiment is over. He was a ghost, invisible and unable to touch anyone. Stephon Tuitt isn’t much different. He makes fewer and fewer impact plays all the time. It’s getting old. And if Keith Butler isn’t on the hot seat then what more does a guy need to do to get on one? Butler’s defense was torched by a guy starting his third career game. He threw only five incompletions all day to go with his SIX touchdown passes.

Because the offense racked up all those points and passing yards don’t be misled. The opening sequence was terrible. The second drive was just as bad and the running game was non-existent. To make things worse, Antonio Brown appears to be unhappy with something. He was spotted going after Offensive Coordinator Randy Fichtner and looked dejected most of the game. Look for that to be a major story this coming week.

Special Teams is suddenly a bigger problem area. Chris Boswell, he of his newly signed multi-million dollar deal, missed an extra point and a field goal. Jordan Berry had one tremendous punt today that led to a safety but other than that his consistency just stinks. When long-snapper Kam Canaday is your best player on Special Teams then you know there’s some serious problems.

There’s no way that Mike Tomlin is going to avoid my wrath. Another significant clock management gaffe still has me scratching my head. The Steelers pulled within five with 1:59 and all three timeouts remaining. This game was not 12-7 either. It was 42-37 and his defense had done very little to stop the Chiefs all day. Why in the wide, wide world of sports would Tomlin believe his defense could get the ball back? Try the onside kick. Maybe you give up a field goal but at least you can still tie the game.

If Keith Butler is on the hot seat then Tomlin’s seat is now warming. This pattern has become all too familiar. Slow starts, unprepared players, poor gameplans… That all points back to Tomlin. Yes, it’s the NFL and players are responsible for getting themselves ready but even veteran players will tell you the head coach is the guy who sets the tone and right now Tomlin’s tone is anything but effective.

With a primetime game at 2-0 Tampa Bay lurking, the Steelers’ problems have to be addressed. With a back-loaded schedule that looks more and more daunting they no longer have any more room for error. Or problems if that’s more your style.

SCB Steelers’ Quick Hitters: The “Where to Even Begin” Edition

I’ll tell you what they look like got seats behind the Steelers on the 30 yard line.

Get rid of Tomlin as I think he is the problem.

The Steelers need to get rid of the entire coaching staff and the g.m. They make no significant moves in the offseason. How can you keep the same coaches and players and expect different results?

The “insanity” defense is harder and harder for me to ignore. I think Tomlin is a ‘good’ coach but I also believe that coaches can be in the same place too long. This isn’t college where guys are around forever. Tomlin is the head coach so he bears the brunt of the issues but he is far from the only one. Butler has been awful and Bradley has done little to improve the secondary. We always have to look at the defensive scouting of the organization. Very few top picks have worked out in recent drafts.

This we don’t need reps or practice, just put me in the game is a problem. It should have been corrected, i told you it would be ugly. This team is not ready to play right now. Kieth Butler is a horrible coach, we do have talent and any reputable coach could do better. Obviously K.C. saw some weaknesses and jump on it. And then adjusted and got us again. Now what bring in Bell with no practice, don’t we have a new O.C.???? We went through this last year but it seems everyone forgot. It took this team 5-6 weeks to get it together. Btw i’m going to the game Monday they better get it together fast the Bucs look very good.