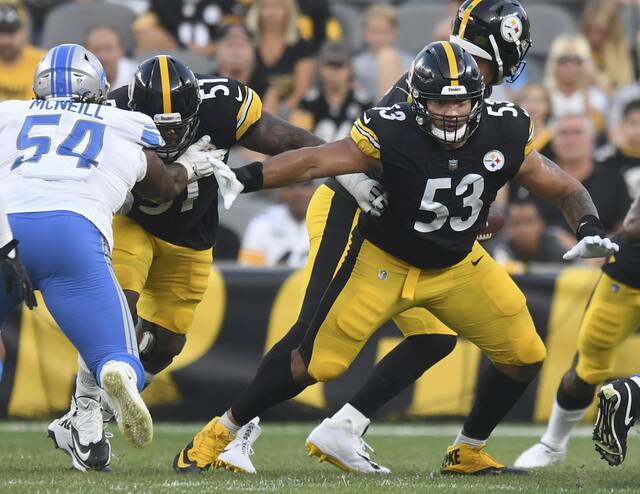 Growing pains are part of life. As individuals we have them and as groups we have them too. The Pittsburgh Steelers’ offensive line knew that growing pains would be part of the process this year. The positive line of thinking was that they would struggle early, start building upwards and then be a force to reckon with by season’s end. While we indeed saw some of that improvement, the O-Line isn’t getting it done right now.

The LA Chargers came into Sunday Night’s game dead last in the NFL in stopping the run. They were clearly determined to make sure Najee Harris did not beat them last night and they largely achieved that goal. The Steelers ran just 18 times for 55 yards and never really got into any rhythm at all. One could argue that getting behind as the Steelers did caused them to get away from the run and there’s some truth to that. But there’s more to that story.

I’m starting to wonder what the future holds for Kendrick Green. I would never find issue with the young man’s effort and tenacity because he has both in plentiful supply. Unfortunately his lack of size and strength is becoming a real issue right now for this offense. Bigger, stronger defensive tackles are having their way with him. He’s being pushed backwards on a regular basis and that’s not good for a couple of reasons. I’m not sure they can use him in the same capacity next year.

First, any time your center gets blown back it has the potential to disrupt the entire play. Secondly, if he’s getting dominated one-on-one then that means linebackers have more freedom to roam because he isn’t getting to the second level. Worse yet, those linebackers can play downhill.

Green isn’t the only guy struggling though. Rookie left tackle Dan Moore has had so much put on his plate that I can’t help but wonder if he’s hit the “rookie wall.” He’s starting to get beat more often on the edge and his run blocking remains inconsistent. Kevin Dotson’s injury couldn’t have come at a worse time for him because he seemed to be gaining consistency in his overall play.

That leads me to JC Hassenauer and Joe Haeg. Haeg was respectable in spelling Trai Turner in the tie against Detroit but when called into duty for Hassenauer when he left Sunday night’s game, he struggled. With the game on the line late in the fourth he was dominated by Joey Bosa and others for two straight sacks that put an end to the team’s hopes.

Regardless of how good or bad this unit is growing pains were going to be part of the season-long experience. Teams are figuring out their weaknesses and are exploiting them. Now it’s up to them and Adrian Klemm to get this figured out. If they can’t then these last seven games will be miserable.