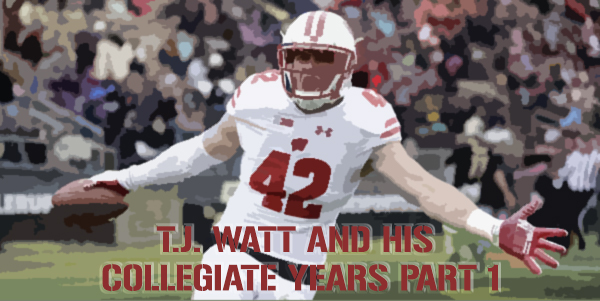 T.J. Watt has finally been honored as the NFL’s best defensive player. In an injury hit season when he tied the NFL’s sack record of 22.5, he thoroughly deserves the recognition as the best of the many talented athletes in 2021.

All his NFL accomplishments are readily available online so I thought it would be appropriate to look back at his collegiate years. Those years that molded a tight end into the monster linebacker Watt became.

Not many fans would have appreciated that he started his football journey with the University of Wisconsin-Madison as a tight end. He had to follow in the big cleats of his brother, and he has certainly succeeded despite injuries to both knees in his freshman year.

Watt played defensive end as a senior in high school but did play outside linebacker in his sophomore year at Pewaukee. In early 2013, Watt followed his two brothers to the university in Madison, Wisconsin. 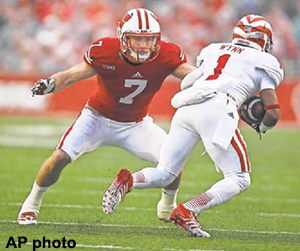 While brother, J.J. Watt was being named the NFL DPOY for 2012, Wisconsin’s coach Gary Andersen noted that the younger Watt (6-4, 215 pound) might have the potential to grow into another defensive end.  “My defensive mind looks over and says, boy, that’s a defensive end,” offered the coach before adding, “And the tight end coach is looking and saying he’s a tight end.”

Coach Andersen did suggest, “We’ll see how he develops.” A projection that reaped a reward in a big way.

After being redshirted his first season, T.J. suffered dislocations to both knees during training camp. In September 2014, Coach Andersen confirmed that Watt needed surgery. “He will miss an extended amount of time, but we hope to have him back on the practice field at some point during the conference season,” Andersen confirmed.

At the end of 2014, Andersen was replaced as Wisconsin’s head coach by Paul Chryst.

Encouraged by defensive line coach Inoke Breckterfield, Chryst asked Watt if he had ever thought about playing defense. The two were sitting in the back of the room during a July team meeting when Chryst brought the subject up. The coach wanted to plant the idea into Watt’s head that he could play outside linebacker.

That evening, Watt spoke to his family including brother JJ. He spent the rest of the night looking at highlights of his older brother and other star linebackers on YouTube. It didn’t take much to get him excited about a switch.

“I fell in love with the mentality,” admitted Watt. “Getting after the ball, making plays. I came back the next day and told Coach Chryst, ‘Let’s do it.’”

Watt’s switch to outside linebacker

Watt’s development was slow at first and he was only used sparingly on third and long plays, but the Badgers’ defensive coordinator Dave Aranda recognised the calibre of the player. “I think T.J. brings some great length, and he brings some natural pass-rush ability,” Aranda stated.

As the season progressed, Watt was given more snaps and authority. “He’s shown through this last stretch of the season to take more responsibility and run with it and be productive with it,” Aranda acknowledged.

“It’s just becoming more natural to me,” Watt told the Wisconsin State Journal. “In the beginning I was a little bit more robotic. I didn’t want to make a mistake. But now I’m a little more free flowing, trying to make things happen. As the season’s gone on, I’ve gotten more and more reps and feel pretty comfortable right now. I feel like I’m in a good groove.”

Watt’s teammate was Jack Cichy, who was drafted by Tampa Bay in 2018. The Badgers moved Cichy to inside linebacker, replacing him with Watt. “He’s fit the role well,” said Cichy at the time. “As he’s gotten more reps in the games, they’ve incorporated him a lot more and I feel like his vision has gotten a lot better. He can see what’s happening, he can analyse it, see what’s developing. That only helps him because he is a physical freak also, so he can manhandle kids and be right there in the action. This is his first year on defense and he’s already made great strides. This summer will be huge for him, and it’s exciting to see.”

At the beginning of 2016, the Badgers beat Southern Cal 23-21 in the Holiday Bowl and Watt received a mention in the Daily Citizen as coming on strong as a pass-rusher late in the season.

When spring training camp opened in March, the Wisconsin State Journal was supportive of Watt in their preview suggesting he had progressed sufficiently to have earned an opportunity to be a starter.

Coach Chryst also gave Watt credit for feeling more comfortable in his new position over the final three games of the season.

Watt reflects on his move from tight end

Reflecting on his move from tight end to linebacker, Watt was honest and admitted, “The learning curve was real steep at first but toward the end it started coming natural to me, getting more and more reps.”

In a Jason Galloway article, Watt conceded, “I just realized you’ve got to let loose and have fun playing the game. It’s one thing to do the right job, but at the same time, you’ve got to do your job and go make the plays. There’s a big difference between those two things.”

With more expected from him, Watt was realistic regarding the additional demands. “I feel like there’s definitely some high expectations, but at the same time, I’m not cashing in,” he said. “I’m attacking each day like I’m out to prove something. Having a starting role on the Wisconsin Badgers defense is a huge role to have, and I’m just trying to live up to it the best I can.”

During the offseason, Watt had worked out so aggressively and confirmed his promise that defensive coordinator Justin Wilcox put him with the number one defense on the first day of camp. “He works at his craft,” said Wilcox. ”He’s a physical, tough guy. He’s got good ability, really good. He’s talented, big and fast. I just think the sky’s the limit for him. I’m real excited about where he’s headed.”

Watt was due to play opposite senior outside linebacker Vince Biegel. “We’ve got the mad man on the other side,” Watt said. “We’re alike. We both like to get after the pigskin and get it. We’ve going to wreak havoc and destruction.”

Biegel was also keen to line up with Watt and suggested, “Like me, he’s a bigger linebacker who can get after the quarterback. He’s got a big role model in his life with his older brother. T.J. is going to be a great asset for this defense.”

Part two will take the reader through Watt’s 2016 Badgers’ season.

Credits for the inputs to this article to Jason Galloway for Capital newspapers, Dennis Semrau Associated Press and Jeff Potrykus of the Milwaukee Journal Sentinel.