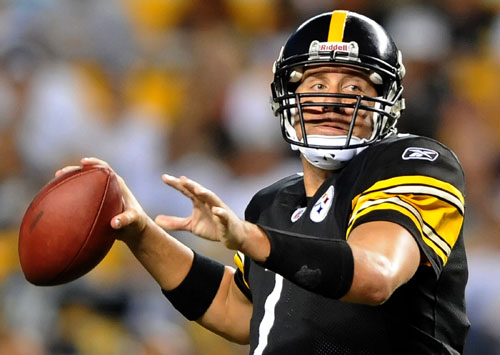 Prior to the Steelers’ Monday night victory over the San Diego Chargers, Ben Roethlisberger spent 20 good minutes throwing all kinds of pass routes to Martavis Bryant. If you listened to Head Coach Mike Tomlin’s press conference last week, you’d notice that he wasn’t real thrilled about it.

There’s a lot of debate so far this week about whether Ben Roethlisberger will play on Sunday when the Steelers take on the 1-5 Kansas City Chiefs. Big Ben said yesterday that he’s hoping to practice fully this week with the goal being that he can start the game. As we’ve seen with Ryan Shazier, Tomlin will need to see Roethlisberger be a full participant before he can let him play.

Prior to Sunday’s win over Arizona, Roethlisberger went through a 45-minute workout that included heavy doses of dropbacks and rollouts. By all accounts he looked to 100% but only he and the team physicians know that for certain.

I certainly understand the argument that with Landry Jones’ solid performance on Sunday, he affords the Steelers one more week of rest for number seven. The problem for me is that next week is one of the most important early season games the Steelers have had in a long time when the Cincinnati Bengals come to town.

Should that be his first game back from this current injury, the numbers don’t bode well for him or the Steelers. SCB contributor Ben Anderson dug these up. In Roethlisberger’s first game back from an injury he’s 2-4 with eight touchdown passes and seven interceptions. He also averages just 191 yards passing in those games.

There are of course many factors such as who else may have been hurt on the offense and who the opponent was but taken as a whole, this shows that Roethlisberger clearly has rust to shake off. At 32 years old, I’m guessing Roethlisberger doesn’t exactly heal as quickly as he did at 26 and I get that. I also understand that this Chiefs’ team is desperate for a win and has a very good pass rush and typically plays well at home.

Those things add up to a recipe for disaster especially when you consider he would also have a new left tackle with Kelvin Beachum out for the season. I’m looking at it like this; How much can we really expect from Landry Jones in his first start? Yes, his debut was great but this will be a different monster in KC.

In terms of the Bengals who are off this week, a loss to them would be a huge setback in terms of winning the division. We already have a division loss (to Baltimore) and with the exception of trips to Arizona and Denver, their schedule isn’t difficult.

History definitely suggests we need Roethlisberger to play this week but is it the right move? We are about to find out. 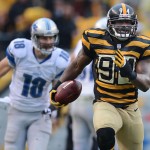 Yes it’s a risk to play Ben this Sunday but it’s also a risk to have Landry Jones face a top notch pass rush in KC so you have 2 QB’s to choose from 1 who looks 100% but in reality isn’t going to be 100% for the rest of the season and the other is a 3rd string QB who looked good vs Arizona but he only threw 12 passes now I will say that does favor Jones cause how can KC gamelan for Jones based on 12 passes? I want Ben out there is this game to get all that rust out of his system cause if he starts vs the Bengals for his 1st start back then the team is in trouble. Yes he seems during workouts but that’s all it is workouts he isn’t taking contact and seeing how he responds. Now there is a way to give Ben extra time to see the D and make a decision and it’s the same way we thought Vick should run the offense in San Diego. Pistol and Shotgun formations. Ben doesn’t take contact on Run plays so calling basic run plays out of any formation should be fine. I can accept a loss to the Chiefs cause it would allow Ben to shake all of his rust and refocus the teams efforts vs the Bengals. My heart says Ben plays my gut tells me it Jones.

The Chiefs O is toothless without Charles and the risk associated with putting Ben out there outweighs the reward.
I want him back out there ASAP, but not at the risk of his health. If he had a rib injury, or something else that did not impact his ability to move in the pocket, I would have no issue with him coming back, even a little too soon.

If Landry can provide 17 points then I think we are fine. With Alex Smith rarely going more than ten yards downfield I think that fits right into the defense’s hands.

Ben has looked rusty when he has come back too quickly. Think of it this way: Ben starts the season with very little preseason game time practice, but he starts the season healthy and rested. He may not be as sharp in game 1 as in game 5, but he’s still pretty good. In the opening game this year he completed 26 of 38 passes, 68%, for 351 yards and a 95.4 rating. Not stellar, but not shabby either, and he was missing Bell, Bryant, and Pouncey. Prior to that game he played very, very little in the preseason.

I don’t have anything against Ben playing in KC provided that he’s truly ready. If the defenders sense any weakness, they will do everything they can to inflict pain on him so he needs to be mobile enough to defend himself.

You make a solid point Copa. Hard to argue with those numbers following a preseason with very little activity. I also tend to agree that KC defenders will make it a point to go after that knee intentional or “otherwise.”

Let Ben play the first half and let Jones have the left over, in the last two QTRs.

Tomlin’s belief is that if you can play then you’re going to start. I agree with you; in principle its not a bad idea but it just isn’t something Tomlin does.