Grading the Steelers Through the First Quarter of the Season

With four of 16 games in the books it’s time for the first of my quarterly reports. At 1-2-1 and struggling, there’s a lot to comment on when it comes to the Steelers so let’s get started.

Under new Offensive Coordinator Randy Fichtner the Steelers are averaging just over 25 points per game. That ranks them tenth in the NFL in scoring and in most cases would be acceptable. The problem is that the defense is giving up 29 points per game (more on them later). After a big opening game James Conner has cooled off as a runner. He’s run for just 97 total yards since he hit the century mark against the Browns. Do not put this all on Conner though. The offensive line has been banged up with David DeCastro and Marcus Gilbert missing games. That will not serve as an excuse however because they are under-achieving as a unit.

At about this point last season, Ben Roethlisberger decided he needed to stop taking the “veteran’s day off” every Wednesday. Once he started practicing on those days each week his play picked up. His play so far has been inconsistent and I believe it’s high time to start practicing more despite his age. This could also serve as a catalyst to get him and Antonio Brown on the same page because currently they are not. Bright spots so far on this offense have been JuJu Smith-Schuster, Vance McDonald and Jesse James.

Jon Bostic has not been the answer to the question of “Who replaces Ryan Shazier?” And to be fair to Bostic he was never in that class in the first place. The Steelers completely avoided this position in the offseason and it is haunting them both in stopping the run and stopping the pass. But this is far from the only problem. The defensive line, with two guys paid quite handsomely, has been largely invisible. Stephon Tuitt will eventually be labeled a ‘bust’ soon if he doesn’t turn things around. Cam Heyward is not having the type of season most envisioned for him either. They are the front line of a unit giving up over four yards per carry and not putting nearly enough pressure on opposing quarterbacks.

The secondary is a complete mess and I’ve seen nothing to make me think that Tom Bradley is any better than Carnell Lake was. There are still communication issues. There are still blown coverages. There are still missed tackles. Artie Burns is dangerously close to not getting his fifth year option and if Joe Haden can’t stay healthy then this secondary might as well just run away and hide. Sean Davis has made some plays from the free safety position but not nearly enough and Terrell Edmunds, as last night proved, is not yet ready for primetime.

The one constant on this defense has been the effort of Vince Williams. Despite his limitations he always plays hard and doesn’t quit. The same could be said for T.J. Watt but he has to improve his pass rushing in order to become a more legitimate threat in that department. Bud Dupree has actually made himself visible a couple of times this year but is still far too inconsistent to be taken seriously. How Joey Porter remains on this staff is beyond me. He’s yet to develop a pass rusher in his time coaching.

The addition of Ryan Switzer was a solid move. He has immediately improved the kick return game and he’s brought stability to the punt return unit. That’s the good news. Jordan Berry should not be punting in the NFL. Outside of three solid punts, he’s been erratic and unable to kick the Steelers out of bad field position. A change is needed. Chris Boswell may have righted his ship last night going two for two on his field goal attempts. This will need to continue in order for fans to once again have total faith in him.

Special Teams Coach Danny Smith has to rein in the penalties on his unit. Going into last night’s game Steelers’ Special Teams were averaging one penalty every nine snaps. That’s completely unnecessary.

I think you have to give Randy Fichtner an ‘incomplete’ right now. He’s called a grand total of four NFL games. My concern with him however is the lack of creativity and not understanding what is working for his unit. Case in point was last night when his offense rallied to tie the game. Then in the second half they got away from that tempo and it killed them.

Keith Butler deserves an ‘E’ and that’s probably not fair. He doesn’t “shop for the groceries” so he’s got make the most out of what Kevin Colbert gives him. To this point, he’s done little. The same problems continue to haunt his unit. From communication failures to poor tackling, there has been little if any improvement since last year despite the handful of top round picks on this defense.

Mike Tomlin has started 0-4 before. That team went on to finish with eight wins over 12 games and was one Ryan Succop field goal away from making the postseason. The current 1-2-1 record honestly feels worse because so much was expected of this team. Unfortunately Tomlin has learned little in recent years. Off the field the locker room is still a mess while on it the same errors that have plagued him in recent years (clock management, penalties, poor challenges) have gone nowhere.

You can look at it like this; the Steelers could be 3-1 right now if not for a missed field goal or fumble in Cleveland and if the offense could have put together one more drive against Kansas City. Of course they could also be 0-4 too had the Browns and Bucs been able to finish their comebacks.

The defense showed last night that they are capable of hanging in there and they’ll need to do a lot of that in order to get on a run and make the postseason. In the meantime, the offense can’t have moments like the second half against Baltimore. It cannot afford to only score 14 points per game. It’s that simple. 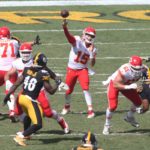 My entire history of 50+years as a Steeler Fan can reflect seasons that were embarrassing and unproductive. I always believed the Rooney family would actually care about the Steeler Fan Base enough to make those tough decisions. That no longer is a thread for me to hold onto. Retaining Kevin Colbert(mishandled L Bell)Mike Tomlin & Keith Butler cements the end of any serious pursuit of a seventh NFL Championship. Sad seasons ahead in Pittsburgh until the Rooney’s wake up.

[…] SteelDad grades the Steelers after the first quarter of the season […]