The dress rehearsal is over. Week three of the preseason is in the books and our Pittsburgh Steelers will play out the string Thursday night in Carolina. As you know, the final week of the preseason means a final chance to impress for a few guys but the concerns the Steelers should have don’t have much to do with the reserves. There are four glaring problems right now in my opinion and they need addressing immediately.

Alejandro Villanueva is a liability right now. I’ve now watched the last two preseason games twice and while Big Al has his moments, especially in the running game, his pass protection scares me to death. He is giving up too much ground and is getting beaten with both speed and power. Several times the rusher got way too close to the QB and only the QB getting the ball out was Villanueva’s saving grace. He has to pick up his game.

What’s the Status of Mike Mitchell? To this point, Mitchell has yet to dress for a preseason game. Even if ready, do you dare play him in the most meaningless game of the year? The secondary is already on thin ice and if they have to rely on Rob Golden for an extended period of time then the defense is in for serious trouble against teams that throw the ball.

The corner opposite Artie Burns is a nightmare. Like a sledgehammer to the head, the Steelers finally realized after getting whipped by the Patriots that they could no longer sit in zone coverage if they weren’t getting pressure on the QB. Unfortunately, they didn’t address this the way they should have in the offseason. Ross Cockrell is having a poor preseason and is not the answer. Coty Sensabaugh is a good ‘team’ guy and able fill-in but is he capable of being a full-time starter on the boundary? I have my doubts. Cam Sutton finally got on the field Saturday night and made some plays but will he be in the slot or on the boundary? Frankly, this was major mistake by the Steelers to not address this sooner.

There is not a #1 tight end on this roster. The argument to this is “we don’t need one because Todd Haley will use more four-wide receiver sets.” Why would he start now? He likes his tight ends being on the field to block and outside of David Johnson, none of them do it consistently. Jesse James is inconsistent catching the ball and when he does he goes nowhere with it. Xavier Grimble makes some catches here and there but doesn’t block and Jake McGee has actually been a pleasant surprise blocking-wise but it doesn’t go much further than that.

In the salary cap era, there is never a team that that doesn’t have at least one or two areas of concern so this isn’t something alarming. The problem is that the Steelers could have addressed these things both in the draft and in free agency but chose not to do so. Hopefully players can step up because otherwise, these concerns will go from glaring to down-right catastrophic. 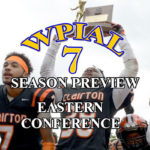 Nice piece very accurate, good CB’s are a must. But the real problem is we have been playing this soft zone for years. And it presents many problems. First being any half way decent QB can dice this defense up. Second being this is the second phase of wholesale changes. First being replacing aging vets then changing from zone to man. Then you have the mentality that drafting CB’s high in the draft isn’t necessary. Artie and Sean may be too little too late. I hate to say it but there is nothing that indicates Kieth Butler is anything but an average coach.

Some concerns still remain. Will they tell Hayden “well this defense is so complicated it takes 2-3 years to learn” unlikely this time. Hayden will not make a bit of a difference if we are still sitting back in that soft zone. It’s time for Butler to step his game up. This will turn out to be a great move if the coaches do there job.