In order to be successful in any venture you have to be diligent and enthusiastic but you also need good people around you. Prior to starting up Steel City Blitz, I was fortunate enough to be brought on the writing staff at Steeler Addicts and as part of those duties I started to take on the weekly appearances on Trib-Live Radio.

For what I believe has to be two years plus now, I’ve had the pleasure to talk about the Pittsburgh Steelers with Daniel Dudley every week during the season and in some cases many times during the offseason as well.

Daniel, or ‘DD’ as I like to call him, put up with my dropped calls and grizzly voice during that time and I couldn’t be more grateful. When Matt and I made the decision to start Steel City Blitz from scratch, DD was a big part of that by sticking with us on his “Pittsburgh Sports Depot” Show.

By doing that, he continued to give us a voice which helped our site grow not into the biggest or best, but into a damn good website devoted to the Steelers.

We wish DD well as he heads to Los Angeles and his new gig at Radio Disney International. We have no doubt he’ll be fantastic there. 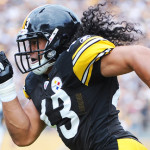