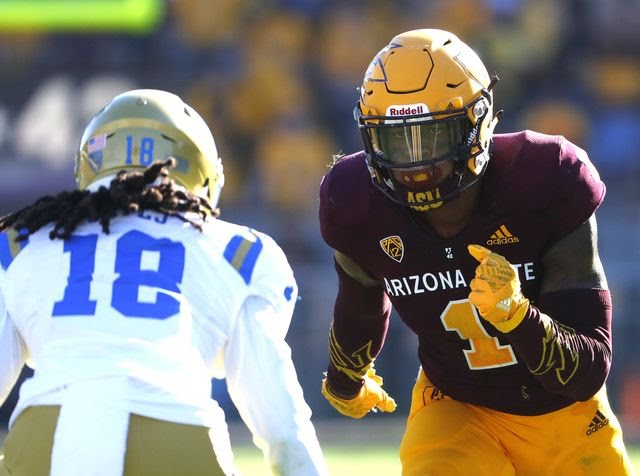 The 2019 NFL Combine is underway and has taken the footballing world by storm. With Antonio Brown continuing to drive his narrative in search of a way out of Pittsburgh, the Steelers are on the hunt for his replacement. As a result, I delved into the tape to find out if N’Keal Harry out of Arizona State could be a viable substitution.

– First Team All-Pac-12 (2017, 2018).
– 2018 Second Team All-Pac-12, special teams (2018).
– Has met with the Pittsburgh Steelers this past week at the NFL Scouting Combine.
– Harry was born in Toronto, Canada, before moving to his grandmothers house in Arizona.
– Earned a five star recruitment rating from Rivals. com after excelling at Chandler High School in AZ.
– Led ASU in receptions, receiving yards and receiving touchdowns in his Junior Year.

Athletic freak, with immaculate build and muscle distribution overall. Harry is quite versatile in his route tree and can be utilized in a variety of positions. Was used both heavily and efficiently on screen plays, for example. He also excels because of his route tree versatility, and often finds himself wide open because of his route running prowess. Harry possesses big play ability, and can contort his body in order to adjust to the ball’s trajectory very well. Evidently, he possesses a huge catch radius, which is arguably his best attribute. He boasts solid hands for the most part and makes many contested 50/50 balls. Sinks his hips really well in order to gain separation too. He adjusts well to contact, which is a credit to his agility and elusiveness, which in turn almost always finds a way to gain positive yardage.

Effort is unquestionable throughout the tape, consistently searches for open field. In addition, he also continuously attempts to be a good blocker downfield. Furthermore, I would say his blocking technique is really well polished for a collegiate receiver, which will stand him well in the NFL. Although his long speed is a concern, his length strides have been simply dynamite on several plays.

One of Harry’s greatest struggles is his speed. This negatively effects his ability to churn out big YAC plays. There are also question marks surrounding his acceleration as he struggles to get to his full ferocity quickly. He also struggles to gain leverage at the line of scrimmage due to poor explosiveness, despite possessing solid footwork.

Upon witnessing Harry’s tape, I believe he is a special talent who will divide opinion. First off, his freakish athleticism and big play ability set him out amongst this year’s receiving class, whilst he also produces the results desired on tape. Moreover, he has demonstrated qualities that a lot of his counterparts haven’t, like blocking ability and hustle on every play.

That said, he struggles indicatively with his speed. These issues range from his explosiveness, to his agility and lack of top end speed. Despite those worries, I believe the combine has been huge for him, as his physical attributes appeared to have plastered over a few holes in his game that soon become evident upon witnessing tape.

You can read ALL of the Steel City Blitz Profiles here.