I could easily start with Antonio Brown after his weekend of interviews but I’ll get to him later. What became quite certain is that as the NFL Combine winds down, the Steelers seem sure to have some solid options at 20. Linebackers Devin White and Devin Bush both tested exceptionally and are amazingly similar in terms of measurements. Should the Steelers decide (assuming they’ve traded Brown) to take a wideout with their first round pick then there could be some opportunities there too if the Draft breaks right. D.K. Metcalf, Hakeem Butler and N’Keal Harry are possibilities. Today however is a day the Steelers will pay close attention to as the defensive backs are up. With Artie Burns being completely undependable and questions about Sean Davis, the Steelers will be looking this field over big time.

Combine Thoughts… Dwayne Haskins flicks the ball with power and ease as well as I’ve seen a guy in a long time. That said, a 5.0 forty and pocket movement are concerns… You can’t tell me that guys aren’t getting “bigger, faster and stronger.” Quinnen Williams, the DL from Alabama is over 300lbs and ran a 4.84 forty… Montez Sweat is an EDGE/DE who weighs 260lbs. He ran the forty in 4.42. Ridiculous!… Ole Miss WR D.K. Metcalf registered a body fat index of less than 2% which is leading to a lot of questions about PEDs. I’m hoping it’s just hard work and discipline by the young man… Keep an eye on Drue Tranquill of Notre Dame. He was super productive as a LB for the Irish and many questioned whether he was athletic enough for the pro game. He ran a respectable 4.57 forty but also finished with a top three finish in the three-cone drill with a 6.94.

Tweet of the Day… Thank Gerry although we’ll still have to say it 200 more times.

Relax everyone, just because the Steelers interviewed a player at the combine doesn’t mean they’re drafting him or even interested in him. They interview LOTS of players.

Welcome to the party Mike Florio. Many of us have been saying this for weeks about the Steelers and AB.

Here’s the latest on what I’m hearing about a potential trade with Brown. Keep an eye on a three team trade. They are relatively rare in the NFL as compared to other professional leagues but do happen. Denver, Arizona, Washington all could be involved. Likely to be a lot of moving parts especially quarterbacks like Derek Carr and Josh Rosen so buckle up! 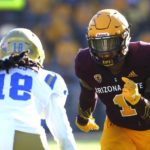 Based on the last 4 or 5 years of the Steelers selecting DB’s in the Draft I hope they hire an outside contractor to pick a DB this year. BECAUSE THEY “SUCK” AT IT.