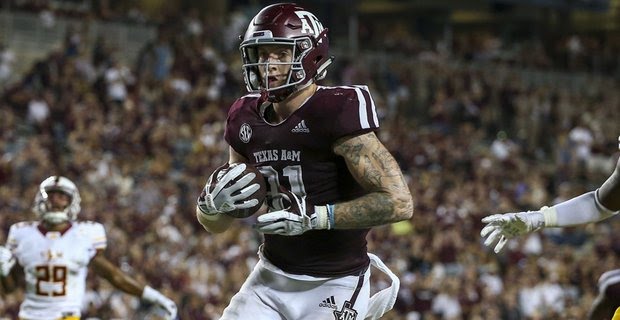 Jesse James’ exit from the Steelers saddened most of Steeler Nation, including myself. As a result of his departure, the organization must seek out depth at the tight end position. Thus, perhaps Colbert and Co. should direct their eyes to Texas A&M’s Jace Sternberger as his potential replacement.

First off, Sternberger’s longevity in the NFL will be a big plus point should he avoid injuries, given that he was used sporadically throughout his collegiate career. In addition to that, his physical frame is near perfect for the position, although he’ll likely need to beef up a little.

One area within which Sternberger excels is his football IQ. He identifies his man when utilized as a blocker well, whilst he pays great attention to detail as a passing target downfield, and even made some high-level IQ-type plays. As a route runner, Sternberger is relatively well polished, despite learning from three systems. Not only that, but he also ran a wide-ranging variety of routes at Texas in particular. Furthermore, his long strides, coupled with explosive speed (for his frame) and adequate shiftiness, make for BIG YAC plays (17.3 YPC average). Another aspect of his game I admire is his hands. He boasts a large catch radius, and brings the ball in well. Not many dropped passes witnessed on tape review. Fairly comfortable under pressure too, having made several contested catches. Finally, his motor. That and his effort are unquestionably good, as he consistently hustles every play.

As a run blocker, I’m really pleased by his production. He, as aforementioned, identifies his opponent, gets his hands inside and holds (legally) on for long enough to complete the play. Though not the finished project as a blocker, his game will improve wonderfully under NFL coaching.

By far my favorite play of Jace Sternberger’s career to date is this one below. He shows his ability as a route runner, whilst he adjusts well to an offensive mistake and grabs the ball for a touchdown.

Jace Sternberger is not getting enough attention. He very easily could be the #2 tight end in this class.#JaceSternberger pic.twitter.com/SKeM72STWD

As a pass blocker, there are significant worries. The largest of which is being caught flat-footed, which he has been in the past. This, of course, led to the opposition getting a sack (see: Auburn Tigers, 2018). On top of that, I don’t think he is strong (muscle) enough at his current physical dimensions to be able to contend with superior athletes in the NFL as either a run or pass blocker. Thus, he’ll likely need to gain some pounds.

He should look to add some stutter moves/better hip movement on his routes, as he may struggle to shake loose of his marker at the next level.

The really great thing about Sternberger as a prospect is that his skill-set is really well polished, that he excels as a pass-catcher, but most importantly the fact that his weaknesses can all be fixed. I have no doubt that with the help of professional coaching that he can improve on his ability as a blocker, which will also be aided with the addition of extra bulk behind his 6’4” frame. Moreover, he boasts solid speed, football IQ and effort, all attributes that Jesse James once provided for our organization. Therefore, I would love to add him to the Steelers’ roster, as both James’ replacement and to be a potential starter, should the opportunity arise later on down the line.

Upon review of Sternberger’s film, I firmly believe that his draft selection and talent grade rest in the third round, which I feel will be reflected come Draft week later this month. 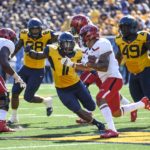 Sorry to go off topic on your post. Bob 2.0 post combine mock 1 Noah Fant TE 2, Julian Love CB 3, Chase Winovich OLB 3, Miles Sanders RB 4, Ben Burkinen LB 5, Phil Haynes G 6, Gary Jennings WR 6, Jimmy Moreland CB 7, John Baron lll K This mock is what i would do to win this year, It’s not what i think the Steelers will do.