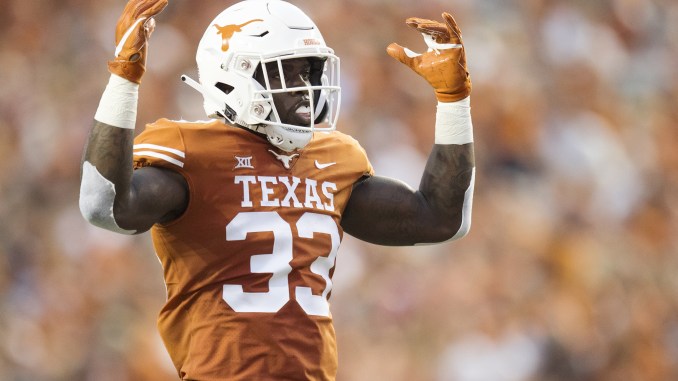 The Pittsburgh Steelers have a huge need for an athletic linebacker who can cover, tackle, blitz and has great instincts. Gary Johnson put his speed on display at the NFL Scouting Combine and Kevin Colbert recently attended his Pro Day. Could he be on the Steelers radar come April?

Play speed is a huge plus, backed up by a blazing 4.43 40-yd dash at the NFL Scouting Combine. Was used heavily as a blitzer (16.5 tackles for loss), great around the line of scrimmage. Instinctive, reads and sifts through blocks patiently. Has experience in coverage lining up over slot receivers and tight ends. Takes good angles to the football. Great motor, if there’s a chance Johnson can make the tackle, his effort is at 110%. Read and reacts like a shark smelling blood. A true hunter. Has a quick first step get-off when blitzing. When stonewalled at the line of scrimmage, makes sure to get a hand up to deflect passes and interfere with the quarterbacks vision.

Watching some #Texas defensive highlights… Keep an eye on LB Gary Johnson (33) does a nice job of diagnosing the RPO, quickly getting downhill and making the stuff in the backfield. #NFLDraft pic.twitter.com/9F0Ez0ZSNU

Play strength while shedding blocks needs to improve. Gets too caught up in the fight of the block than shedding it. Would like to see a bit more reading of his zone than solely on the quarterbacks eyes, needs to get a feel for the zone. Don’t see many big hits or thumps. Would like to see less ankle aiming when tackling. Change of direction athletically is a bit worrisome. Can get stonewalled while blizting, needs to get stronger and use more finesse while shooting the gap. Sometimes loses contain on stretch plays, needs to prevent from being sealed. Stack and shed technique is really sloppy. Allows himself to get swallowed up by offensive lineman.

If the Steelers miss out on both Devin White and Devin Bush and are moderately comfortable with Mark Barron , they may wait until Day 2 to draft a linebacker. Gary Johnson should be in the conversation as one of the linebackers considered. He’s extremely underrated and has a high ceiling to boot. His speed and instincts coupled with his coverage experience make him an attractive option with one of the Steelers’ 3rd round picks. If I had to choose, Johnson would be my ‘this year’s’ Darius Leonard.