Conference play is now in full swing across the WPIAL with all 17 conferences playing in-section games this past weekend. The biggest impact of the WPIAL’s new scheduling format was in 5A, where with three conferences of six teams each, none of the 5A teams to date had played a conference opponent. The non-conference slate did provide some great storylines, and just two teams (Moon and Kiski) entered Week 5 with unblemished records. After Kiski fell to North Hills on a late touchdown, that left Moon (who ground out a hard-fought victory over South Fayette) as the lone undefeated 5A team after six games. We interviewed head coach Ryan Linn of the undefeated Tigers, and talked about the renaissance he has brought about in the Tigers program. Prior to hiring Linn in 2017, Moon had not won a playoff game in over a decade and had 3 straight losing seasons. Under his leadership, Moon has only have one losing season in the last four years and won the conference title in 2019. Now, the Tigers are the top-ranked WPIAL 5A heading into the thick of conference play.

You can follow Coach Linn on Twitter @Coach_Linn and keep up with the rest of the Moon football program @Moon_Football, the Moon Athletic Department @MoonTigersAD, and the Moon Area Sports Network @moon_area.

Congratulations to our Brute Athletic Player of the Week Jake Gedekoh. Last week Belle Vernon’s star running back Quinton Martin left the game against Thomas Jefferson with an apparent lower-body injury. Martin is a highly-touted prospect who received a number of Division 1 offers after his freshman campaign last year. But with Marin out, Jake Gedekoh stepped into the lineup and showed off his abilities, running for over 200 yards and 5 TDs to lead Belle Vernon to a victory over undefeated Laurel Highlands. Shameless plug, I took my family’s Tour of the WPIAL to Belle Vernon for this game and you can check out our account.

There were a lot of great performances around the WPIAL this week. In addition to Gedekoh, three other players accounted for 5 touchdowns this week. Steel Valley RB NiJhay Burt, who was our Week 3 Player of the Week when he ran for 285 yards and 5 TDs against Keystone Oaks, had his SECOND five-touchdown performance of the year, bursting for 277 yards and 5 TDs against unbeaten Ligonier Valley. Beaver Falls QB Jaren Brickner threw for 256 yards and 3 TDs and ran for 2 more scores in a win over rival New Brighton to keep The Jug. Also in the 2A Midwestern Conference, Neshannock QB Johnny Huff threw for 2 TDs and ran for 3 TDs in a win over Ellwood City. Players to account for 4 touchdowns included Laurel’s Luke McCoy, Rochester’s Sal Laure, Mt. Lebanon QB Joey Daniels who threw for 3 and ran for 1, Sto-Rox QB Josh Jenkins who threw 4 TD passes in just the first half, and Central Valley QB Antwon Johnson who also threw 4 first half TD passes. Mohawk’s Marc Conti had 3 receiving TDs and a rushing touchdown and Fort Cherry QB Maddox Truschel had over 300 yards of total offense, 2 rushing TDs and a passing TD. Adam Fernandez of Ambridge, who snapped a 28-game overall losing streak and 34-game conference losing streak, returned both a punt and a kickoff for a touchdown.

One of the best stories of the weekend was Shenango RB CJ Miller running for 103 yards and 3 touchdowns after his father unfortunately passed away earlier this week. The Shenango team wore special helmet stickers to honor Chuck Miller. If you are feeling generous, there is a GoFundMe page for the family.

The WPIAL has partnered with the Greater Pittsburgh Community Food Bank to hold a league-wide food drive in October. Additional details can be found at the link below. 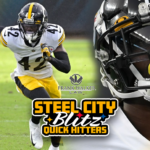 […] this week’s edition of the WPIAL Blitz Show we interviewed Moon Head Coach Ryan Linn, looked at the big performances from Week 5 and the […]