The premier game of Week 4 in not just the WPIAL but in the entire state of Pennsylvania was Thomas Jefferson taking on Belle Vernon in 4A. The teams entered as the #1 and #3 ranked 4A squads in the state and the game delivered. After a back-and-forth game, Belle Vernon QB Devin Whitlock exploded for a 40-yard walk-off TD on 4th down with just 11 seconds left. We interviewed Belle Vernon Head Coach Matt Humbert, one of the rising stars in the coaching profession, this week on the WPIAL Blitz Show. In just over a decade of coaching at Ringgold and Belle Vernon, Coach Humbert has a 91-29 record (.758 winning %) and has been responsible for 3 of Thomas Jefferson’s 5 conference losses since 2015.

We led off the show talking about Devin Whitlock’s incredible game-winning touchdown and showed the video. Here it is again, because you can’t see it too many times:

DEVIN WHITLOCK RACES 40 YARDS FOR A TOUCHDOWN WITH 4 SECONDS LEFT TO GIVE BELLE VERNON A 28-21 WIN AGAINST THOMAS JEFFERSON!!! 🔥 pic.twitter.com/MXLLn0krBu

Congratulations to our Brute Athletic Player of the Week Thomas Burke. Leechburg is looking to make the playoffs for the first time in 32 years. Burke accounted for 5 touchdowns in the Blue Devils victory over Springdale. In the first half alone he threw for 243 yards and 3 TDs and ran for two more. On the night, Burke threw for 328 yards. It was a great performance to lead Leechburg to a key conference victory. Given that five teams from each conference in 1A make the playoffs, this was a big victory for Leechburg’s playoff chances.

There were a lot of great performances around the WPIAL this week. In addition to Devin Whitlock‘s touchdown run above, he finished with 163 rushing yards and 2 TDs. South Allegheny RB Kavan Markwood tallied 4 touchdowns – 2 on the ground, 1 through the air, and 1 on a blocked punt. Laurel Highlands’ Rodney Gallagher had over 100 rushing and passing yards and had 2 TDs on the ground and threw for 2 more. The California-Mapletown game was an epic shootout which saw Damani Stafford run for 208 yards and 4 TDs (including the game-winner) and Landan Stevenson run for 261 yards and 3 TDs. Sto-Rox’s Josh Jenkins moved back to QB from WR and threw for 204 yards and 5 TDs. Mt. Lebanon’s Joey Daniels and Cornell’s Sincere Kimbrough both had 3 passing and 1 rushing TD.

Thanks for watching! Follow us on Twitter @WPIAL_Blitz and @BadgleyBruce. Thanks to Nathan Grella and Brownsville Football for sending us questions for this week’s show. If you’d like a question answered on a future show, hit us up on Twitter! Check out past episodes of the WPIAL Blitz Show on the Sports Stream Premium Network Channel. 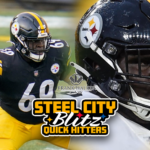 […] half of the season. Coincidentally, after interviewing Belle Vernon head coach Matt Humbert on last week’s edition of the WPIAL Blitz Show.  Our Brute Athletic Player of the Week award went to Belle Vernon RB Jake Gedekoh who ran for […]