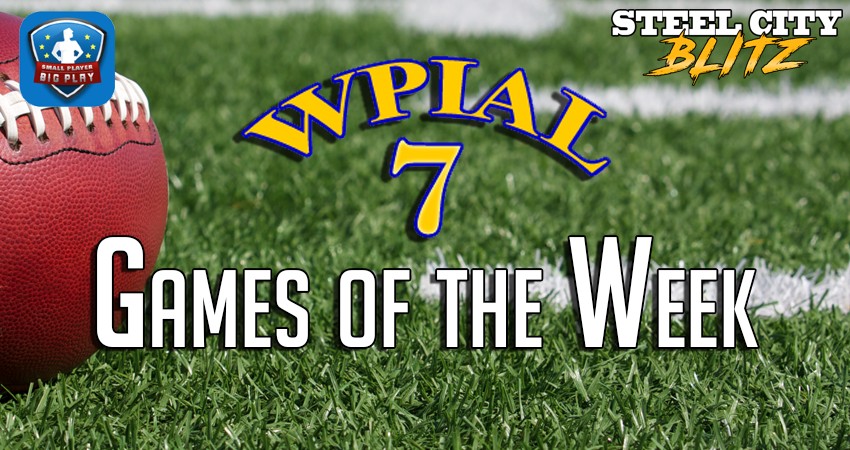 The 2020 WPIAL Football season is finally here! This year will be one of the most unique in Pennsylvania High School sports history due to the COVID pandemic, but the good news is that sports will be played. High school kids throughout the state will have the opportunity to strap on a helmet and play football this year. After everything that has happened since March, that is a great sign of the beginnings of a return to normalcy. This week’s games will all be on Friday and Saturday, but future weeks may have games spread across dates from Thursday to Monday. Currently, fan attendance at games is severely limited (though a bill did just pass the State Legislature to allow school districts to make decisions on fan attendance). Due to this, a number of teams will be streaming their games over various outlets. Links to livestreams that we were able to find are included in the post below. This year, our WPIAL coverage is sponsored by the Small Player Big Play App, which provides schools the opportunity to fundraise by live-streaming their games and events. Check out their Twitter page and get the app for free on Apple or Andriod devices.

I’m happy to once again be doing a guest spot on the WMBS pregame show. They’ll be broadcasting the Laurel Highlands-Albert Gallatin rivalry game tonight both over the air and as a video stream on their Facebook Page. Laurel Highlands features sophomore Rodney Gallagher who received a number of D1 scholarship offers in both football and basketball after his freshman season. Gallagher is one of the most exciting players in the WPIAL and will be taking the helm at quarterback this year for the Mustangs. Since leaving the WPIAL to play an independent schedule, Albert Gallatin has won 5 games last season which is as many as the Colonials won in the last 8 seasons combined. Albert Gallatin was also the WPIAL Champion in the Best Helmet in Pennsylvania Tournament that I organized along with @pa_fb_history and @END2008 over the summer. We previewed that game and also discussed the upcoming season on the Sprowls Insurance Group Pregame Show, which you can listen to, starting at 6pm on Friday night.

If you missed any of our conference previews this season be sure to check out the WPIAL archive. Also follow our new WPIAL Twitter account @WPIAL_Blitz where we will be tweeting score updates and other information throughout the night. After the weekend’s games are over, check out our WPIAL Standings Page. Due to the COVID-related scheduling changes, the games originally scheduled for Week 9 are taking place as the season-openers. After this week, the schedule picks up as normal for Weeks 3-8.

Central Catholic is the defending 6A Champions and looking to start their season off on the right foot. On the other hand, Canon-Mac has reached the playoffs each of the last two seasons but has not won a playoff game since 2004. With only the top four teams making the playoffs in 6A this season, every game carries increased weight. Central Catholic’s traditionally run-heavy offense will be able to lean on senior Eddy Tillman who ran for over 2000 yards and 26 TDs last season. Junior RBs Antonio Pitts and JD Younger will also be factors in the ground game. On defense, linemen Alex Kozera and Bralen Henderson will have to step up to fill the role of Pitt-commit Elliot Donald who opted out of playing this season. Canon-McMillan will also be leaning on their run game. Junior Ryan Angott led the team with 896 yards and 8 TDs last season. The battle to watch will be down in the trenches as Big Macs DE/OT Connor McMahon (a Navy-commit) will be tested against Central Catholic’s line.

The Allegheny Six Conference is absolutely loaded. Moon won the conference title last year. Peters Twp reached the WPIAL final. South Fayette, who has won 64 straight conference games, moves up from 4A. Upper St Clair has reached the playoffs in 20 straight seasons and Bethel Park in 19 straight. With a very limited playoff field this season due to COVID changes, those streaks are potentially in danger. Every game in this conference will count towards the playoff chase. Upper St Clair returns a number of starters including dual-threat QB Ethan Dahlem who threw for 2218 yards and 17 TDs and ran for 951 yards and 15 TDs last season. Also returning his his leading receiver David Pantelis (1169 yards 9 TDs) who led the WPIAL in receiving yards last season. Bethel Park lost a slew of players to graduation and will have to restock their starting lineup. Troy Volpatti is the top returning rusher and will anchor the Black Hawks traditionally strong ground game.

4A Games of the Week

Belle Vernon is coming off their best season this century, reaching the WPIAL final for the first time since 1999. McKeesport is moving down from 5A and carrying a 22-year playoff streak. With the limited playoff field this season, the winner of this game will become the top challenger to Thomas Jefferson for the conference crown. Both schools lost a number of players to graduation but also have talent returning into structured systems that have produced results. For McKeesport, that system is their triple-option wishbone attack. For years this offense has produced stellar rushing attacks that dominated opposing defenses. Asaad Robinson figures to be the focal point of the offense this year, running behind D1 lineman Colin Lyons. For Belle Vernon, Devin Whitlock has emerged as an all-around playmaker. Whitlock transferred from Monessen after his freshman season and last year posted over 500 rushing yards and nearly 300 receiving yards and scored 10 times. The Leopards also have a strong ground game as Dan Anden and Ryan Hamer both averaged over 8.5 yards per carry last season.

The Parkway Conference (at least in name) is back! In the four classification era the Parkway was known as a gauntlet that typically produced the best teams not named “Thomas Jefferson” in the classification. For 10 straight years from 2006-2015 at least one Parkway Conference team reached the WPIAL final each season. In four of those years both teams playing at Heinz Field were from the Parkway. Now, Aliquippa moves up to 4A because of the PIAA’s success formula and starts their campaign for a 13th straight trip to the WPIAL final against New Castle. The Quips and Hurricanes had a strong rivalry back in the 1970s and 80s, including a meeting in the 1987 Championship Game that Aliquippa won 26-14. For Aliquippa, Vaughn Morris threw for over 1100 yards and 18 TDs last year and will lead the “Air Warfield” offense. Vernon Redd, who has a number of D1 offers, ran for over 700 yards and 14 TDs last season and is a stellar defensive back. New Castle’s attack is led by dual-threat QB Michael Wells. Last season Wells threw for 1450 yards and 15 TDs and ran for 222 yards and 5 TDs. The Red Hurricanes passing attack will have some stability as leading receiver Donny Cade also returns.

Livestream on the Westmoreland Sports Network

Yes, I know that technically the Trojan War was fought between the Trojans and the Achaeans, but when two teams named the Trojans face off it’s too good of a name not to use. These two teams have battled it out for the conference title each of the last two seasons. In a normal year, both teams very well may have run the table and entered this Week 9 matchup with the conference crown on the line. While North Catholic will have to replace three-year starter Zack Rocco at quarterback, the Trojans have a slew of talented receivers led by Nick Maher. Last year Maher had over 850 yards and 12 TDs and is on our Watch List for the WPIAL Receiving Title this season. North Catholic will have a big size advantage on the outside with 6’4″WR  Jaren Thimons and 6’3″ TE Mathias Benson. Also watch out for Isaiah Jackson who is a stellar defensive back. Derry’s biggest change was losing head coach Tim Sweeney who built the Trojans into a strong program and took them to the 2018 WPIAL final. On the field, Mike Kelly and Pryce Donovan will take over the workload in the backfield after both averaged over 5.5 yards per carry last year. Paul Koontz returns at QB but did not throw much last year, averaging just 10 attempts per game in Derry’s run-heavy attack.

This game could very well decide the Century Conference Champion. Washington is coming off two straight runs to the WPIAL final, winning in 2018 and losing to Avonworth last year. The Prexies are a run-heavy offense that have a legitimate star in Andre Porter, a transfer from Washington DC, who became an instant Twitter sensation last week after videos from the scrimmage came out of him plowing over defenders. Also in the backfield mix are junior Tayshawn Levy and Shaliek Cox who both averaged over 7 yards per carry last season. McGuffey is coming off their best season in decades, scoring their first playoff victory since winning the AAA WPIAL title in 1994. McGuffey’s triple-option attack returns three of their top four rushers. McKinley Whipkey ran for over 800 yards and 9 TDs, Nate Yagle was the leading scorer with 12 TDs and had over 1000 yards of total offense between rushing and receiving. Jared Johnson came on during the second half of the season to be a key contributor after a breakout 4 TD game against Southmoreland. Last year, these were the two highest-scoring teams in 2A, so don’t be surprised if this game turns into a shootout.

Livestream on the Westmoreland Sports Network

Typically we have to wait until the end of the season for this one, but with the schedule getting shuffled around, we get the 10th meeting between Clairton and Jeannette in the first week of the season. Incredibly, since moving down from AA to A in 2014, Jeannette is 65-3 against all WPIAL opponents not named “Clairton.” However, Clairton is 7-2 against the Jayhawks in that time, including a Week 9 victory last season that won the Conference Title for the Bears and propelled them to the WPIAL crown. Clairton only lost 4 seniors to graduation and returns their backfield tandem of 1000-yard rusher Isaiah Berry and 500-yard rusher Dontae Sanders. Up front, D1 lineman Dametrius Weatherspoon anchors both the offensive and defensive lines. While Clairton has talented running backs returning, Jeannette returns their aerial attack. Dual-threat QB James Sanders threw for over 1300 yards and 16 TDs and ran for over 250 yards and 1 score last year.  Toby Cline and Brett Birch return on the outside for Jeannette. Last year these were the two best defensive squads in 1A, so this one could be a low-scoring affair but both offenses have explosive playmakers that can change the game in an instant.