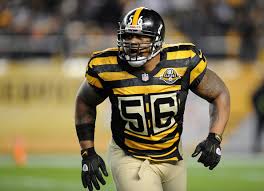 I’ve seen and heard a lot about LaMarr Woodley the last few days. Much of the talk has revolved around how much Woodley needs his counterpart on the other side of the defense to create his sack opportunities. While I understand the point from a schematic point of view, I don’t always buy it.

With James Harrison no longer a part of the Pittsburgh Steelers, some have voiced concern that Woodley will not be able to get to the quarterback without the constant pressure Harrison provided on the other side.

My feeling is this, LaMarr Woodley should not have to rely on anyone else. He has proven, when healthy, that he needs no help in bulling his way to the QB. He appears to me to be quite healthy. Maybe as healthy as he has been in three years so my expectations are high.

The main premise of pressure from the outside linebackers in Dick LeBeau’s 3-4 defense is to create pressure that does one of two things; 1. Have one OLB force pressure to the other and 2. Force the QB to slide up in the pocket to be sacked by the inside backers or defensive linemen.

This scenario of course assumes both OLBs are rushing. If one isn’t, the same principle usually still applies. One way or another someone will have outside contain or will be rushing from the other side whether it’s an end, inside backer or defensive back.

In Woodley’s case, it shouldn’t matter who is coming on the other side because when at the top of his game, he can be dominant. This is what we came to expect during his early years.

Obviously Woodley has been targeted by the media and by the fans because ever since he signed his big contract he has been injured or way off his game. This season is his opportunity to rid himself of those ghosts. He recently disclosed that he joined Ryan Clark in Arizona during the offseason. Clark had been inviting him for years and once his ankle healed after last season ended, he arrived. Clark is notorious for his offseason workouts and diet program and Woodley apparently bought into it.

There can’t be any excuses from him this year. Doesn’t matter if it’s Jason Worilds or Jarvis Jones coming from the other edge, Woodley is being paid to make plays on his own and it starts week one against Tennessee.

A Reason for Pouncey’s Poor Play?