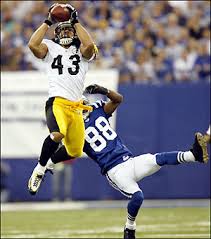 There have been moments in the first three preseason games for the Pittsburgh Steelers that made me want to stop time. I wanted to bottle the moments I saw and save them for December and hopefully January. The moments I’m talking about were plays on which Troy Polamalu looked like Troy Polamalu. With hair flapping behind him and that juvenile little skip he has as he approaches the line, Polamalu has looked as good as he has in years.

The question we all want to know is, can this Troy be the same one late in the season? Over the last several seasons, Polamalu has struggled to remain healthy, especially in the latter parts of the season when winning and losing are the difference between the playoffs and the beach.

You’ll forgive me if I have my doubts even though the future hall of famer looks tremendous right now. The track record of years’ past has not escaped my mind and probably not yours either.

We’ve heard that Polamalu switched training methods this offseason and whatever he is doing it appears to be working.

I mentioned on The Blitz podcast last night that it might be possible to see Polamalu get spelled from time to time in order to reduce the wear and tear on him. If Robert Golden or Shamarko Thomas can give him breaks occasionally that could go a long way towards his health being better later in the season.

Whether Mike Tomlin, Dick LeBeau and Polamalu himself are looking at this possibility is beyond me, but I think it has to be an option considering his recent past.

Regardless of how he progresses through the 2013 season, we can all agree he looks great right now. Can he look this great in December is the real question.

Diamonds in the Rough Could Make Difference...

Deck stacked against Steelers, how will they...

What Does William Gay Back in Pittsburgh...

how about practice days off? seemed to help ward.

Excellent point J. I think that’s exactly where this is headed with Troy.