Will Roethlisberger Hold Out When the Steelers Open Camp? 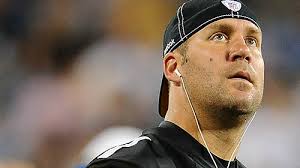 There are lines in the sand that are drawn and both sides know the consequences of what stepping over means. There are also lines in the sand drawn by Bugs Bunny in order to get Yosemite Sam to fall off a cliff. As of right now, I can see a situation where Steelers’ quarterback Ben Roethlisberger draws a line in the sand and it won’t be the one produced by Looney Tunes.

With the news yesterday of Colin Kaepernick’s monster new deal which includes a record $61 million in guaranteed money, the situation between the Steelers and Roethlisberger just got much more serious.

While the deal reached by the San Francisco 49ers and Kaepernick has many levels to it, it only increases the amount Roethlisberger could and should demand. With Jay Cutler and Tony Romo, who have won absolutely nothing by the way, making $18 million per year or more, why should Roethlisberger settle for less?

Worried about age are you? Sorry, but that precedent was set when the Cowboys gave the 34 year-old Romo half of Texas and parts of Oklahoma as well.

I’ve tried to look at the situation with black and gold glasses on but I’m now to the point where I can see Big Ben holding out when camp begins and he has every right to at this point. With just this year and next left on his current deal, Roethlisberger can force the hand of the Steelers.

Either they give him the new deal he desires or he sits and the Steelers go with Bruce Gradkowski. If I’m the Steelers and I have no interest in signing him to a new deal comparable to Cutler and others then you put Roethlisberger on the trade block now. Why wait and risk something happening to him? At the very least get some picks in return.

If you think a ‘new deal’ for Roethlisberger is a just a matter of time then the clock just got moved forward significantly because right now, Ben is the one drawing the line in the sand.

“Speed” on Display as Steelers’ OTAs Roll On

Deja Vu All Over Again for Steelers

Benching Adams is the Only Way Steelers...

Plenty of Question Marks at ILB for...

I don’t see Ben holding out. I’m sure that Ryan Tollner has been in constant contact with the Steelers FO, especially since the Kaepernick deal went down. Honestly, I think the 9ers overpaid Kap because they weren’t comfortable with the depth at QB on their team, but that’s another story for another time. Ben will probably end up with a deal that pays him in the $14-$15 million/year range and the deal will get done sometime before camp starts.

There’s no question Scott that Tollner and the Steelers are talking. I can’t tell you how in depth those discussions are but I’m willing to be they have each thrown out numbers and are working towards a middle ground. Whether they reach that ground or not will depend on both sides. Each will claim it has viable arguments but right now I think Ben has the leverage.

Ben is at a point in his career were asking for and getting more money should happen. It was only a couple years ago when he redid his contract to help the team. To be honest he should be asking to call his own plays he’s earned that also.

Ben should be in the 18-21 million per year range. Sounds like a lot but comparing that to the last five contracts signed for starters and even that amount may be low. He has taken the Steelers to three super bowls, won two. The last two years at 8-8 would probably have been 4-12 or worse if not for Big Ben. Pay him!

I really believe Ben will take less because he wants to win now. He need look no further than his own division to see how a huge QB contract can hamstring a team. That said, I can understand if he wants that type of money too.

Been a Steelers fan all my life. Rather than pull another Bradshaw, and keep a player beyond productivity, while other good (no chance to prove greatness) QBs watch from the bench long enough to retire (Hanratty), give him a chance to go elsewhere. Let the young blood develop live-time.

I think they are fairly different comparisons because Hanratty was far better than Grad or Landry Jones. That said, Ben still has good years left. Just hope they are with the steelers.