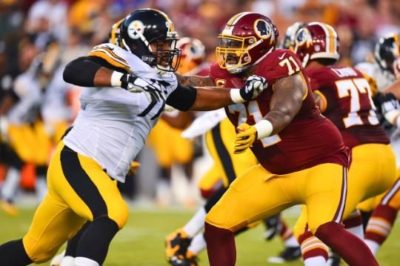 The old saying is that in team sports, the greatest area of improvement is made between the first and second games of the season. It’s awfully hard to argue with the result from last night but there was one potentially troubling statistic that came out of the win over Washington. The Steelers’ defense recorded a grand total of ZERO sacks.

For a defense that has long prided itself on pressuring the quarterback, “zero sacks” isn’t exactly the most encouraging start to the season. Add in that there were only two hits on quarterback Kirk Cousins (one by L.J. Fort and the other by Stephon Tuitt) and it’s no wonder that Cousins was able to throw for 329 yards.

But…. Therein lies the deeper issue. Cousins completed almost 70% of his passes but he also had ZERO touchdown passes and threw two interceptions. A third was in and out of the hands of Ross Cockrell.

What the Steelers did in Washington was ‘play it safe.’ They did so by playing a lot of zone coverage which isn’t necessarily abnormal for them, but they didn’t bring much in the way of blitzes either which is something they usually do. We saw lots of three and four man rushes which meant the Steelers were dropping seven and eight guys into coverage.

Why? First, by doing this you keep a lid on DeSean Jackson. It makes it very difficult for him to get deep and when the running game wasn’t doing much for Washington, that allows the Steelers’ secondary to play even looser. Secondly, you keep receivers who become ball carriers in front of you. Despite some more poor tackling, you may have noticed the Steelers were still pretty solid at keeping the Redskins from getting to the stripe on third down. They actually held Washington to just 3 of 10 on third down conversions.

But now Andy Dalton and the Cincinnati Bengals come into Heinz Field. Should we expect a similar defensive plan from Mike Tomlin and Keith Butler? I don’t think so.

Last week the Bengals force-fed A.J Green to the tune of 12 catches and 180 yards and a score. Five other Bengals’ receivers caught nine balls combined. The other key factor that may push change from Keith Butler is that Andy Dalton was sacked seven times by the Jets and hit another three times.

So perhaps the combination of a big day for Green and a lot of pressure on Dalton will change the Steelers’ gameplan right? It’s going to depend on how confident Butler and Tomlin are with leaving the secondary exposed. The more guys you bring the less you guys you have to defend in the secondary. One of the alignments the Steelers used Monday night was having an outside backer on each side with two down linemen. In one instance they also had Anthony Chickillo down in a three-point off the left edge. That could be something we see more of this week in an effort to create confusion and more pressure.

If the Steelers feel like Brandon LaFell and Tyler Boyd can beat them then they need to be careful. If not I think the blitz makes a major return to the defense in the home opener. I also think it will be coming from all angles as well. Any way you slice it, I think you’re going to see some very different things on Sunday.

Week Two of ‘Nail the Number’ is Here