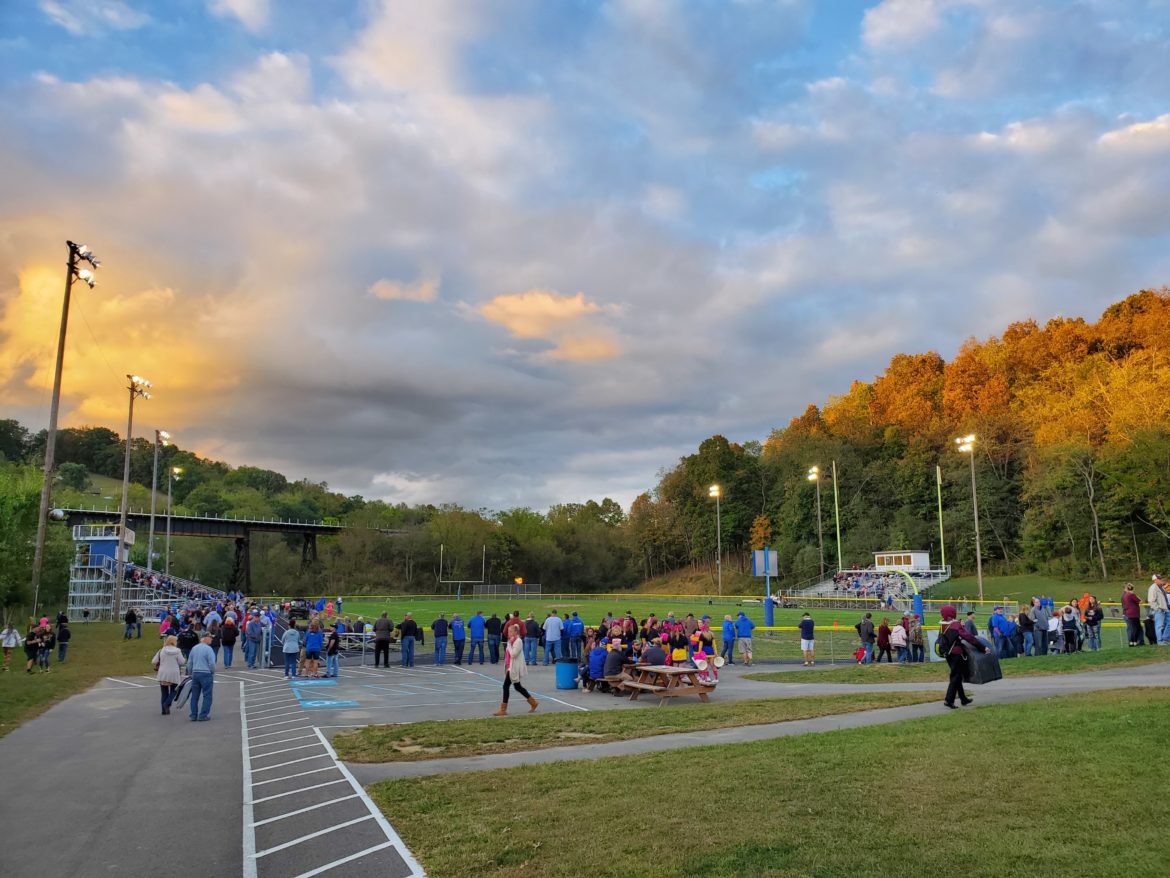 Most of our WPIAL coverage on Steel City Blitz is objective coverage, discussing standings, playoff scenarios, and Games of the Week. This project is be something a little different – a first-person account of my family visiting different towns and stadiums throughout Western Pennsylvania. Earlier this year we made our first visit on the tour to Rochester. Last week, we traveled to Southmoreland. This week we made our third stop to West Greene in the southwestern corner of Pennsylvania.

West Greene School District covers the nine municipalities of Western Greene County at the southwestern corner of Pennsylvana along the border of West Virginia. The nine communities as a whole have a population of about 5,000. After the revolutionary war, there were disputes between Pennsylvania and Virginia regarding who had rights to the land west of the Allegheny Mountains. Virginian settlers first came to the area in the 1760s, citing King James’ original charter to the Virginia Company in 1609 which granted them “sea to sea” rights. William Penn’s grant from King Charles II in 1681 gave Pennsylvania claim to the area as well. In 1781, delegates from Pennsylvania and Virginia met and agreed upon the western and southern boundary lines of Pennsylvania, thereby giving the territory of Greene County to Pennsylvania and the northern panhandle area west of the boundary line to Virginia (which would become part of West Virginia).

The original inhabitants of this region were Indian Sachem Six Nations of the Iroquois Confederacy, namely Mohawks, Oneidas, Onondagas, Cayuga, Senecas, and Tuscaroras. There are a number of historic native american archaeological artifact sites throughout the County. Jackson Twp has a number of historic sites, including the Richard T. Foley site where numerous archaeological discoveries were made of a Monongahela village with at least 60 homes. Other historic sites include the William Cree House, Hughes House, and John Rex Farm. Another significant Monongahela village was located in Richhill Twp and is listed as the Fisher Site in the National Register of Historic Places. These settlements were generally along tributary creeks to the Monongahela River.

West Greene is primarily comprised of small towns and farmlands. In the 1820s Greene County was the largest wool producer in the state and is still the largest sheep-raising county in Pennsylvania. Oil drilling and coal mining were the primary industries. Recently land has become more popular for marcellus shale drilling. The Graysville General Store (originally known as the Hayes General Store) has been operating in the same location since 1817 and still has the original wooden flooring.

West Greene first played football in 1954. Their first WPIAL Playoff Appearance was in 1992 when they reached the semifinals by defeating Serra Catholic in double overtime in the first round before losing to Clairton. In 1993 West Greene made the playoffs again with a 9-0-1 record and defeated Avonworth and Farrell en route to the Championship Game where they lost 55-0 to eventual Class A State Champions Duquesne. West Greene has made the playoffs each of the last two seasons, losing in the first round to Rochester both times.

Rather than taking the highway route, we decided to avoid the construction delays on 79 South and take the scenic route. Around Washington we picked up Route 18, a fun winding road through the farmlands of Washington and Greene counties. It was a great drive for the first weekend of October as the leaves had started to change colors. Our kids requested to listen to Johnny Cash on the drive, giving our cruise an extra-folksy twang.

Just a short drive from West Greene High School in the village of Rogersville is Center Twp Park. The park also features baseball/softball fields where West Greene’s teams play. West Greene’s softball team has won an incredible FOUR STRAIGHT WPIAL championships. They won the 2017 and 2018 State Championship in softball but lost in the semifinals in 2019. The park features South Fork Tenmile Creek running through it and a very sturdy bridge traversing the creek. 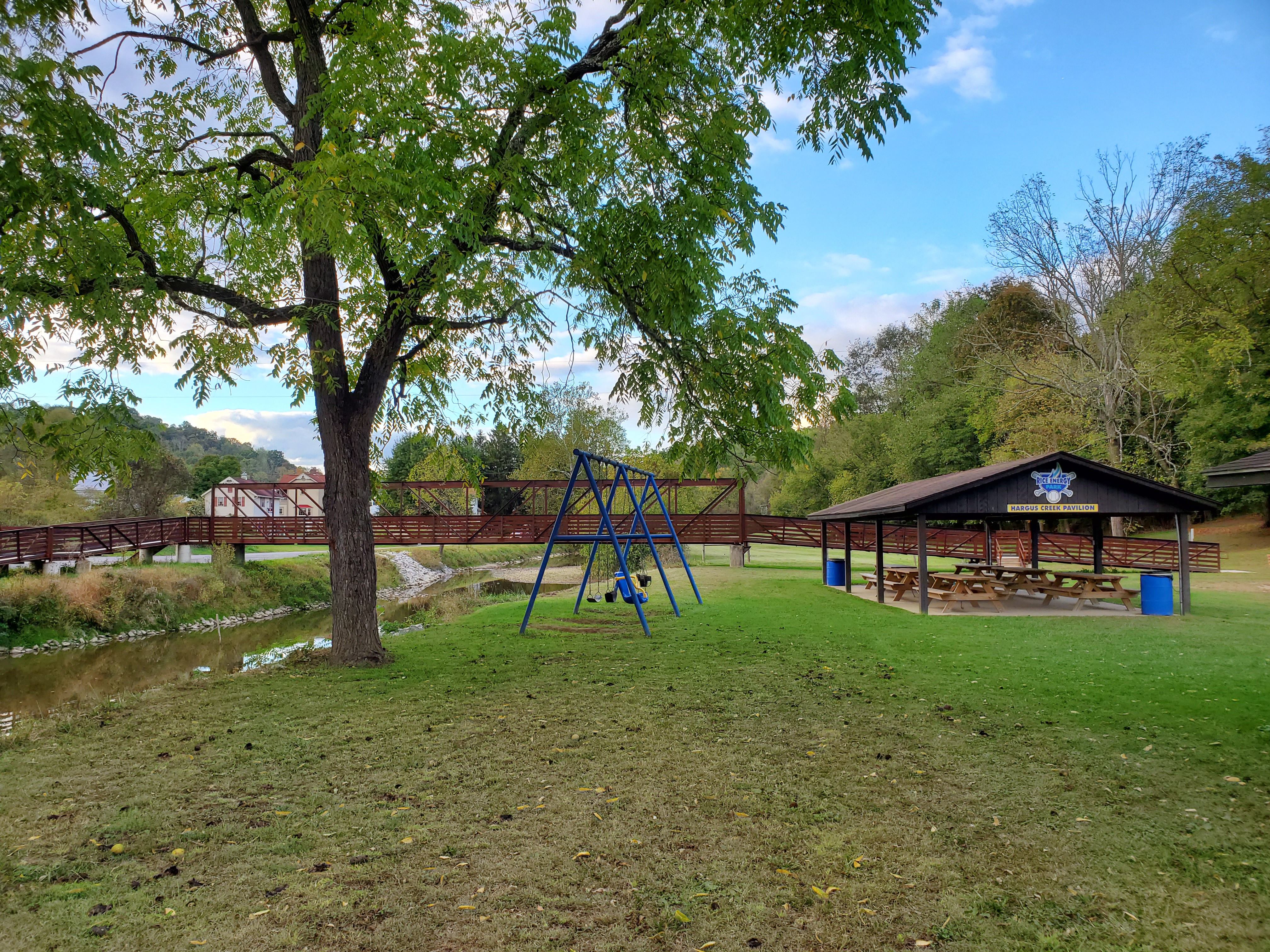 The park had a lot of great play features for kids of all ages. Our kids particularly enjoyed the see saws. Our 1-year old even braved climbing up to the large slide to give it a go. A very nice and well-maintained park, though a little off beaten path, tucked away from the road behind some residential homes that share a driveway with the park. 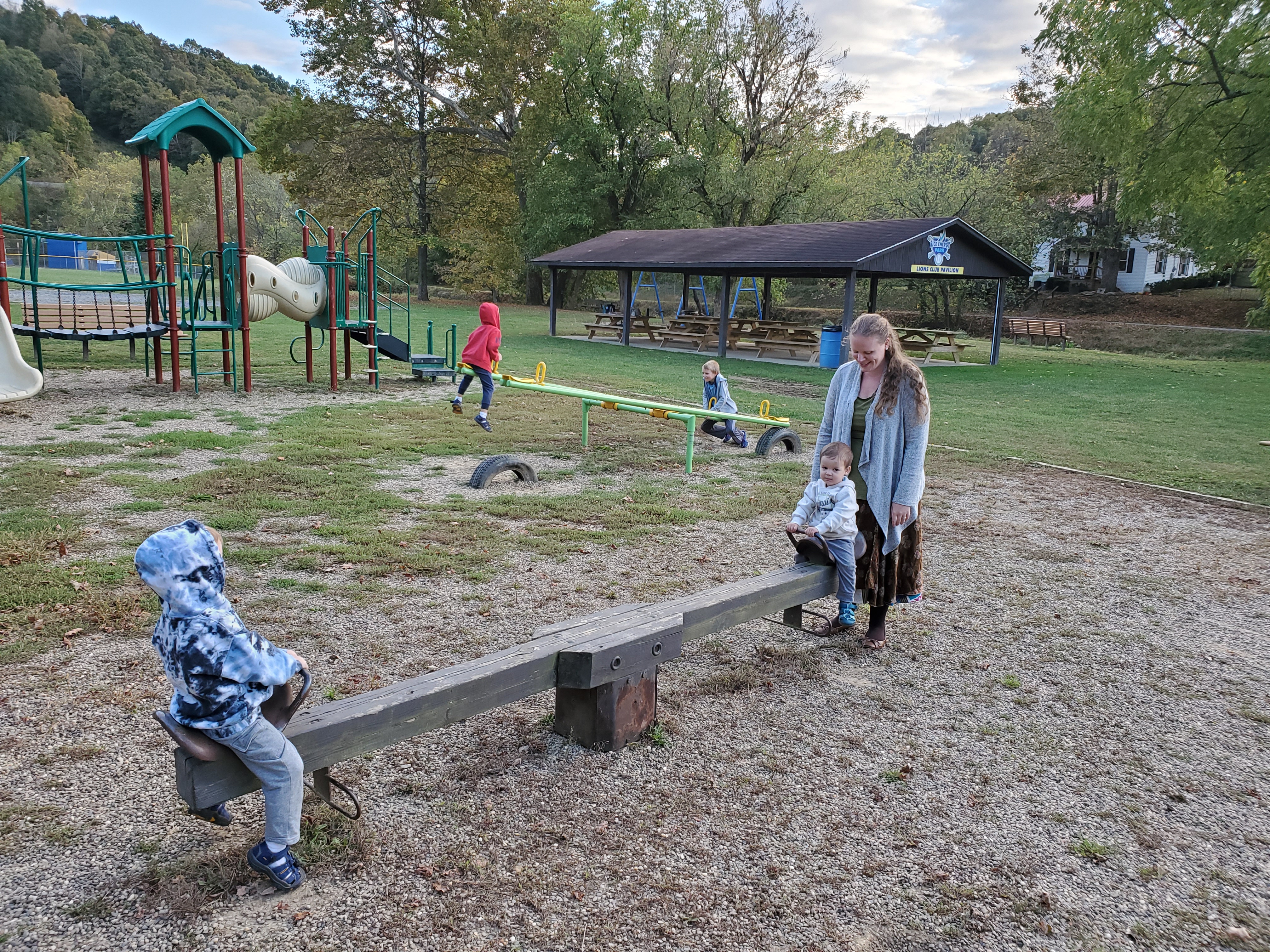 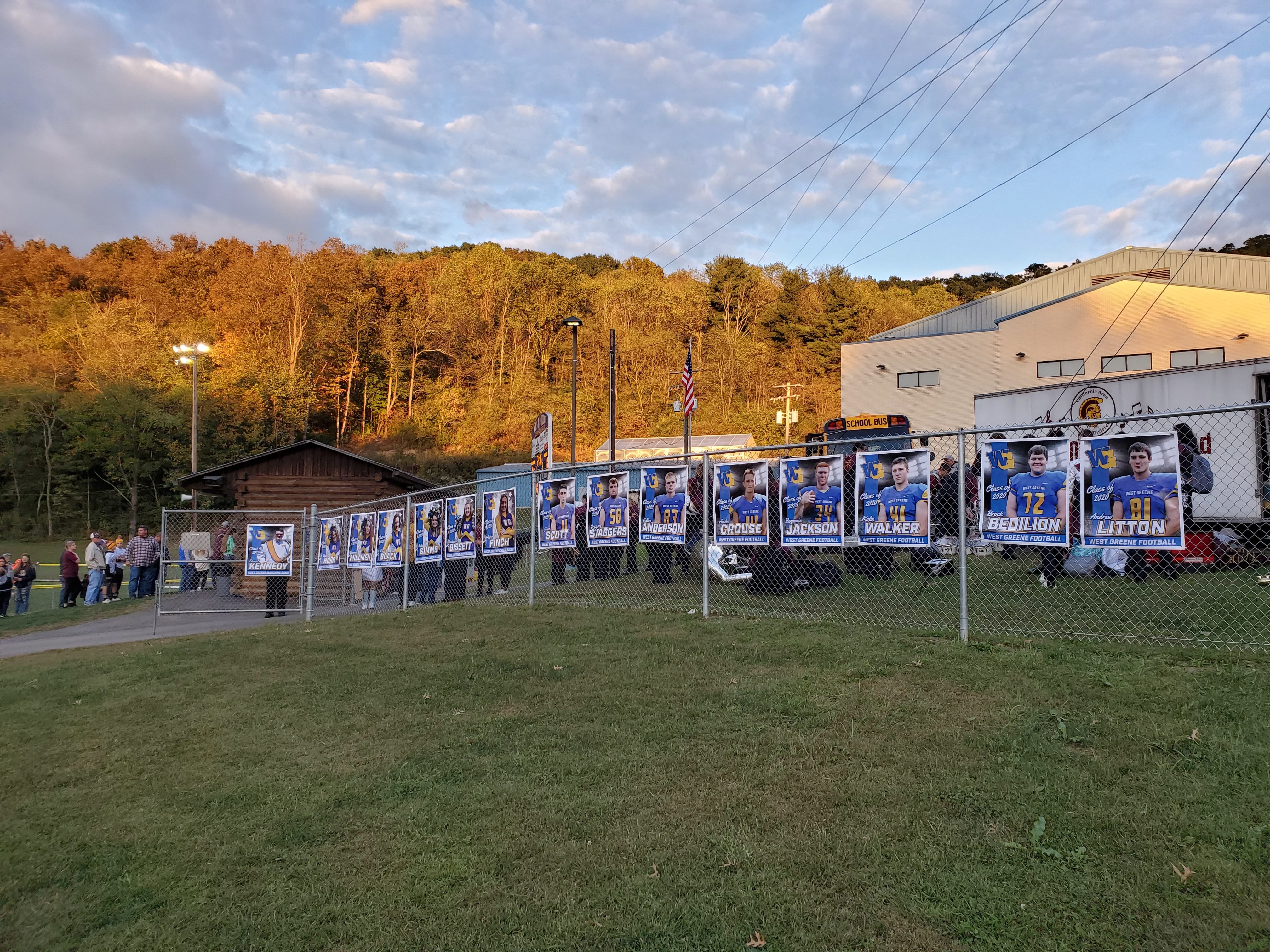 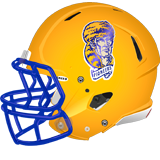 West Greene has a senior-heavy lineup that is off to one of their best starts in school history. Running back Ben Jackson came into the game leading the WPIAL in rushing with over 1500 yards and 29 TDs. Our 8-year old, who loves history, was very excited that West Greene had a logo with a pioneer in a coonskin cap like Davy Crockett. He also commented that West Greene’s concession stand looked like an old log cabin, “Which makes sense because they’re the Pioneers.” 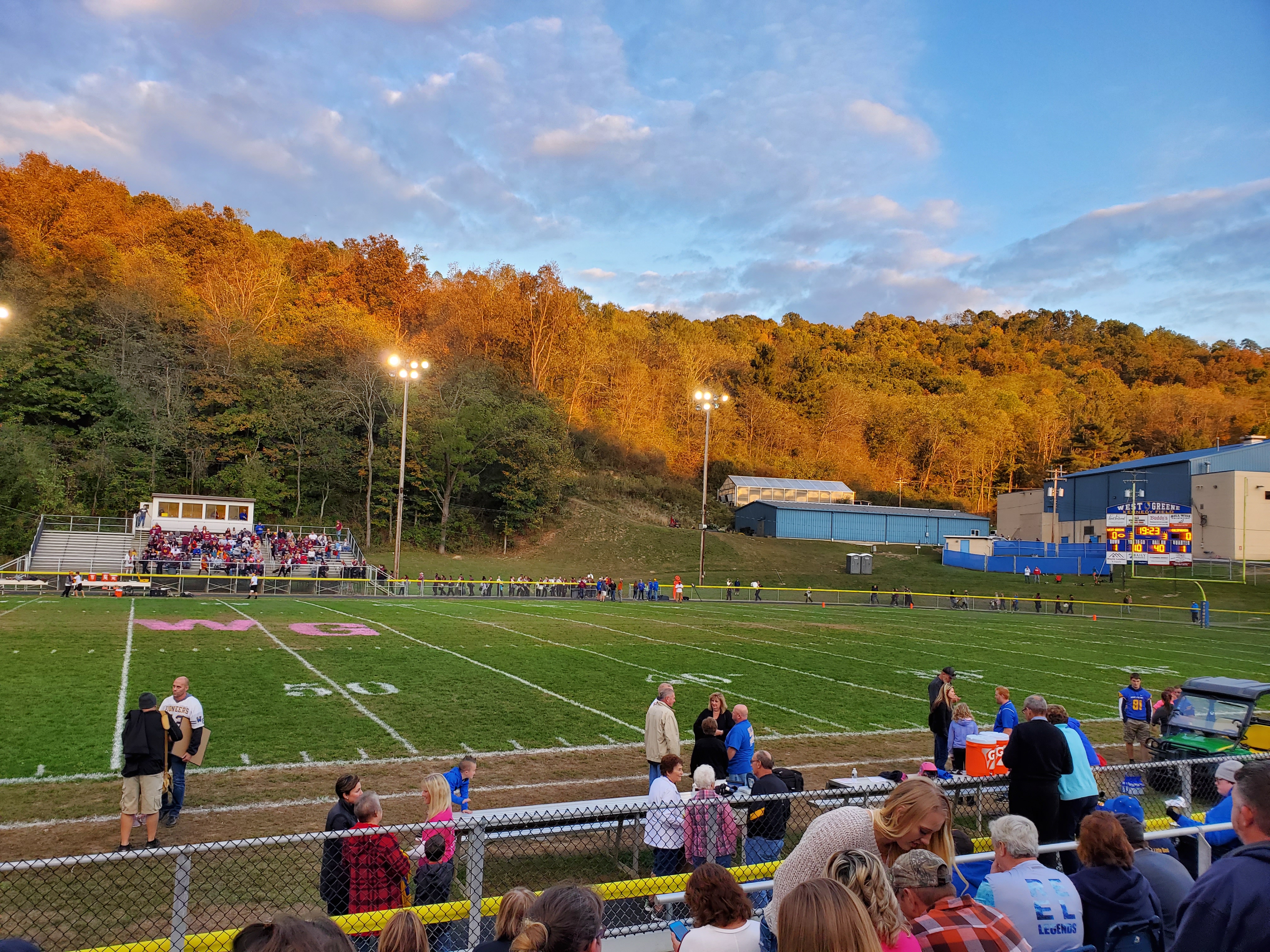 Kennedy Field at West Greene sits next to the high school complex with a backdrop of a tree-covered hillside. The home stands face east and the setting sun leaves its last rays on the autumnal backdrop. The logo at midfield was painted pink in honor of Breast Cancer Awareness month. The natural grass of the field was in great condition for an early-October game. To the west of the stadium, Hargus Creek runs right behind the bleachers and an active rail trestle provides a scenic backdrop at the north end of the stadium. 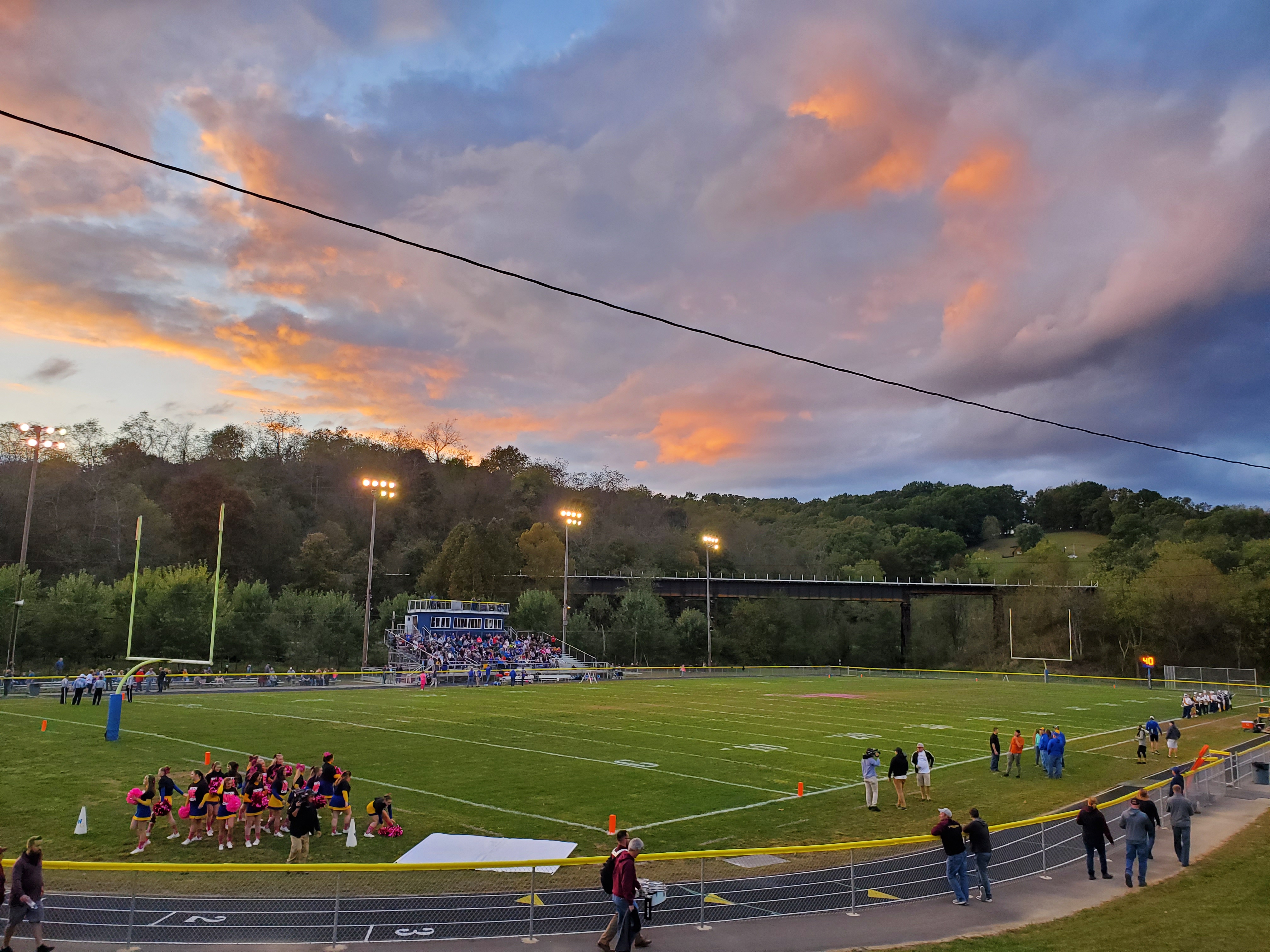 The game itself got off to a relatively sloppy start. Both teams were plagued by fumbles and penalties. Ben Jackson provided a moment of excitement by breaking an 80-yard run, but it was called back for a penalty because he hurdled over a California defender. While an extremely athletic play, hurdling is illegal in high school. Other than that, West Greene was able to move the ball in the first half, but penalties kept the highest-scoring team in the WPIAL off the board. For their part, California’s defense did a great job swarming West Greene’s rushing attack and containing Jackson. West Greene’s defensive line was living in California’s backfield and the Trojans went backwards more often than forwards. The teams combined for 7 fumbles (4 lost) in the first half. It looked like the teams would go into halftime scoreless, but with under a minute to play, Jackson broke free around the right end and took a 4th and 1 carry 55 yards for a touchdown. 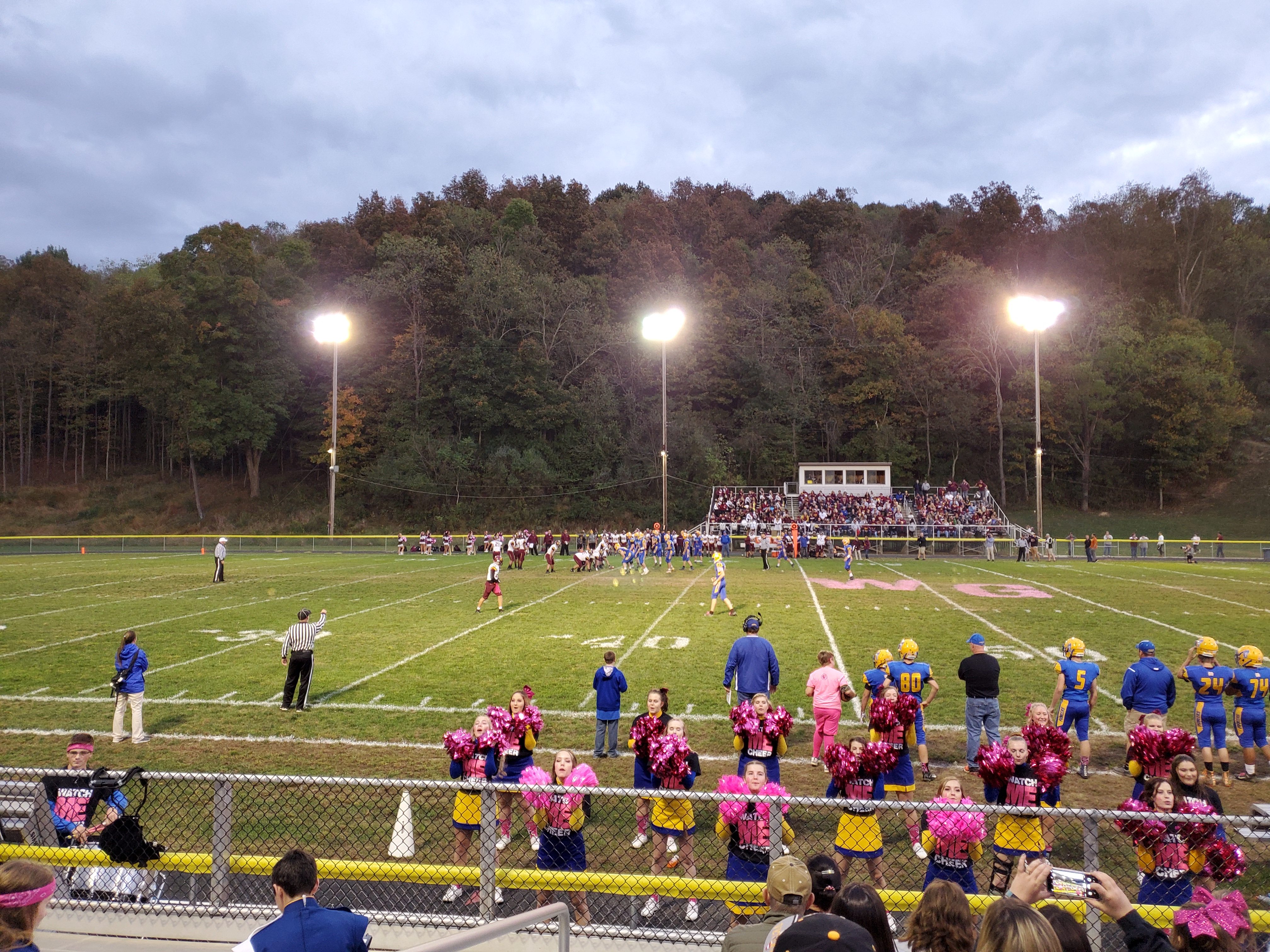 This game was the WMBS Game of the Week. For those that have been following our WPIAL coverage, you’ve seen that for the last few years I’ve been doing a guest spot on the WMBS pregame show. Brian and crew were nice enough to let me stop by the booth at halftime to join their broadcast and give some on-air thoughts about the first half. I didn’t get to watch the bands much, but I will say that California had an impressively large band for a 1A-sized school. West Greene’s band had about 7 musicians, including a cheerleader and a member of the football team.

On the first play of the second half, Jackson again went over the right side and found a crease, breaking free for a 73-yard touchdown to break the game open 14-0. That run, along with his 55-yarder to end the first half, put Jackson over 200 yards on the night. From there, West Greene’s defense continued to dominate, especially in the trenches. West Greene’s stout defense was rewarded with a touchdown, recovering a fumble in the end zone to stretch the lead to 21-0. Early in the 4th, Kolin Walker found the end zone on a 3-yard run. The Pioneers would later add a rare passing touchdown to seal a 35-0 victory, their first win over California since 2003. The win also clinched the Tri-County South Conference title for West Greene, since they only have one remaining conference game and have wins over both California and Chartiers-Houston (the only teams with just one loss). On the night, the WPIAL’s leading rusher finished with 282 yards and two touchdowns, an impressive performance to bring his yearly total to 1857 yards. He is about 1100 yards shy of the WPIAL’s single-season rushing record with at least 4 games to go.

Post-script: Benjamin Jackson finished the regular season leading WPIAL in rushing with 2705 yards and 47 TDs, breaking Armstrong’s Zane Dudek’s single-season touchdown record. The Pioneers won their first playoff game since 1993, defeating Greensburg Central Catholic in the first round before falling to Sto-Rox in the semifinals. Jackson finished the season with 3,076 yards and 50 TDs, the first WPIAL player to ever run for over 3,000 yards in a season.

Overall, we had another great trip. Our Tour of the WPIAL has been a great success so far on all three of our trips. We have been very fortunate to have good weather for all three games. Last year, it seemed like every other week was a massive rainstorm. This year, it has been nearly-perfect fall weather (especially this week with the leaves starting to change). I snapped this picture of our kids on the bridge at the park, who look like they’re about to drop the hottest album of the year. 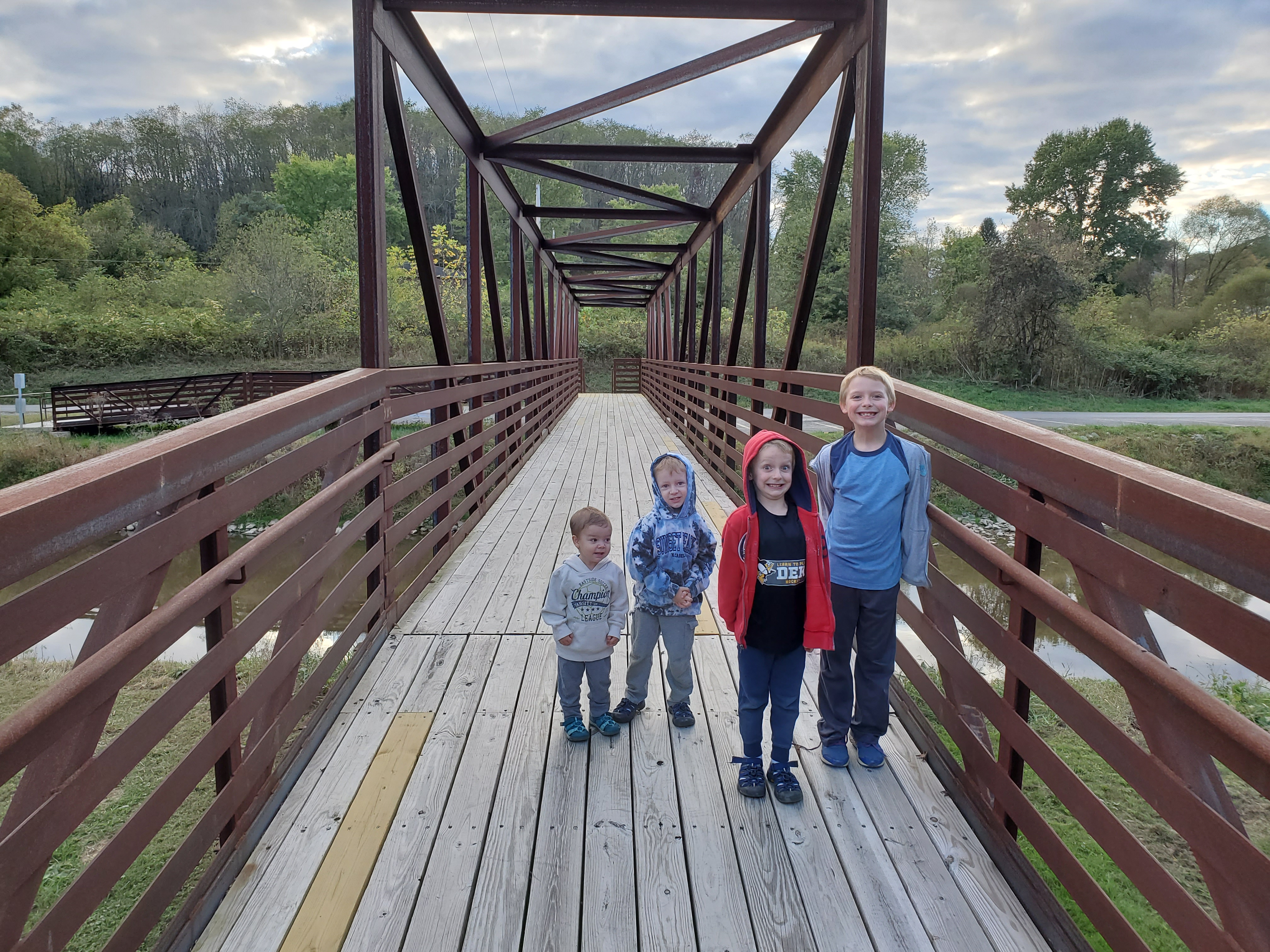 Tour of the WPIAL: West Greene was last modified: October 4th, 2020 by Ian
Californiatour of the wpialWest GreeneWPIALWPIAL Football 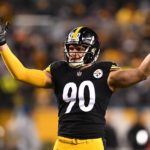 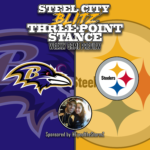