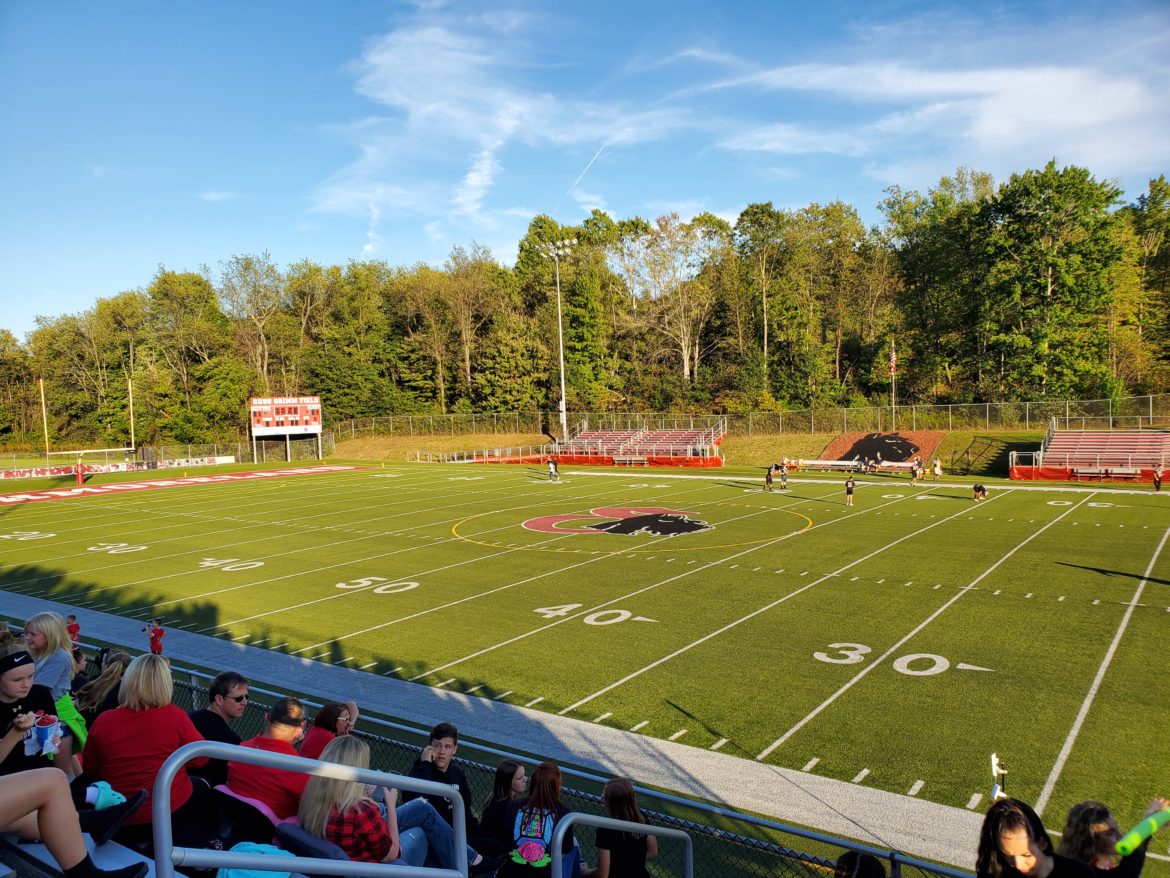 Most of our WPIAL coverage on Steel City Blitz is objective coverage, discussing standings, playoff scenarios, and Games of the Week. This will be something a little different – a first-person account of visiting different towns and stadiums throughout Western Pennsylvania. Earlier this year we made our first visit on the tour to Rochester. This week, we traveled to Southmoreland, which spans the Jacob’s Creek area in southern Westmoreland and northern Fayette counties.

Pitched this crazy idea to my wife:

I want to attend a football game at every stadium in the #WPIAL. Shockingly, she gave me the green light with the stipulation I take the kids with me and teach them something about each town as well. Done and done.

The area was originally settled by Scotch-Irish immigrants in the late 1770s and had branches of the Pennsylvania Railroad and Baltimore and Ohio (B&O) Railroads through the town by the early 1870s. Jacobs Creek, which forms the dividing line between Westmoreland County and Fayette County, runs through the middle of the school district. Scottdale and East Huntington are to the north of the creek while Everson and Upper Tyrone are to the south. The creek was named for Chief Jacob a well-known Native American of the area and is a tributary of the Youghigheny River. By the 1790s, Mennonites from eastern Pennsylvania and Maryland arrived and settled in the Jacobs Creek area. Among these settlers were Christian Stoner, Henry Oberholtzer (which became “Overholt”) and Peter Loucks.

Christian Stoner, originally from Bedford County, Pennsylvania, purchased 500 acres and laid out the town of Stonersville which was later renamed to “Alverton.” Alverton is the current location of Southmoreland High School. Henry Oberholtzer and his son Abraham Overholt built the Overholt Mill and Distillery in West Overton. They grew rye on their farm which was distilled into whiskey and became famous for their Old Farm Pure Rye Whiskey. 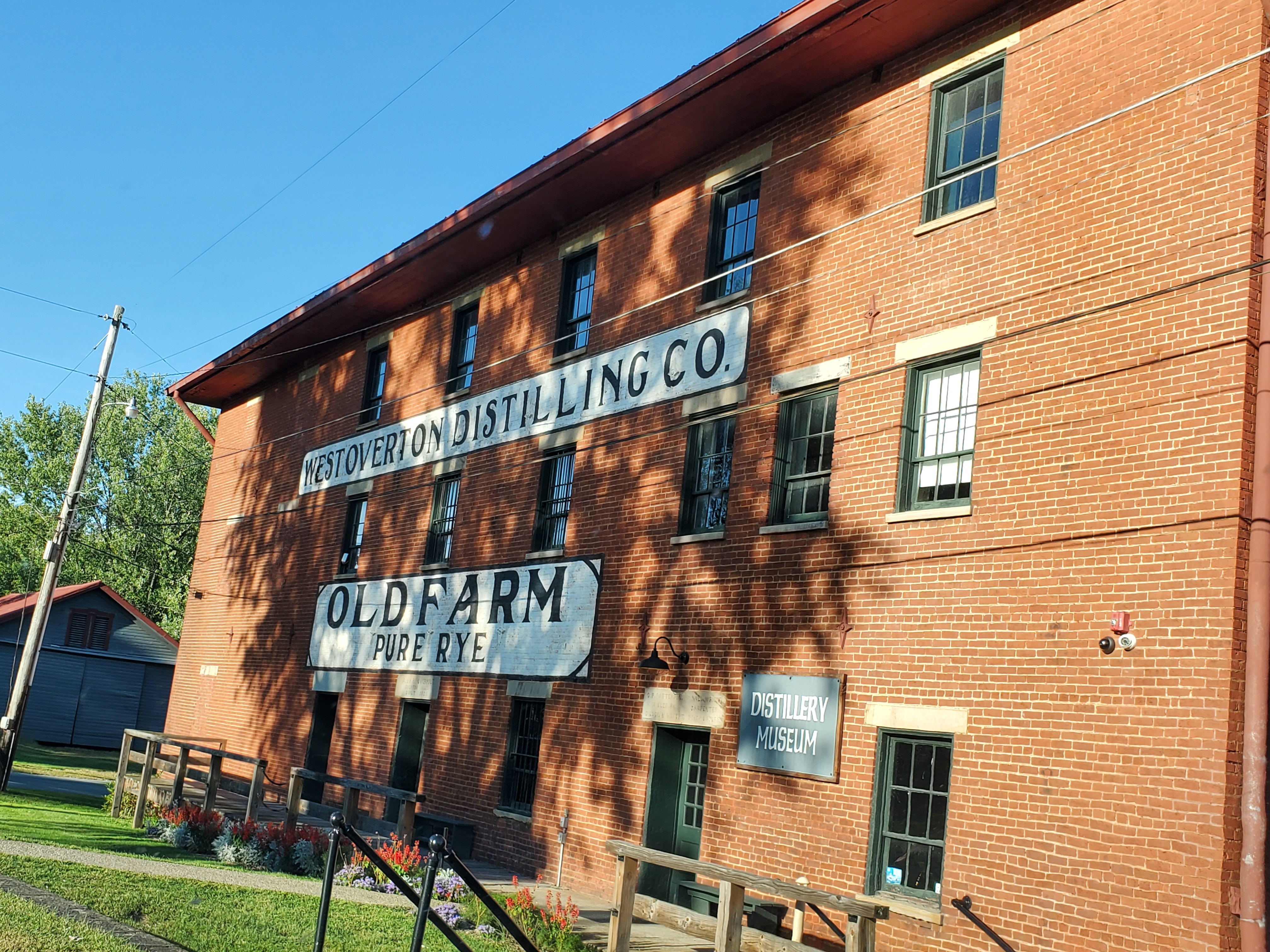 “Old Overholt” whiskey is still produced at the Jim Beam distillery in Kentucky. The distillery was closed in 1920 with the passage of Prohibition. Abraham Overholt was the grandfather of Henry Clay Frick and Frick was born at the Overholt farm. The West Overton Historic District is located in Scottdale and bordering East Huntington. The West Overton Museum, a rural industrial village, is the only pre-Civil War village still intact in Pennsylvania. 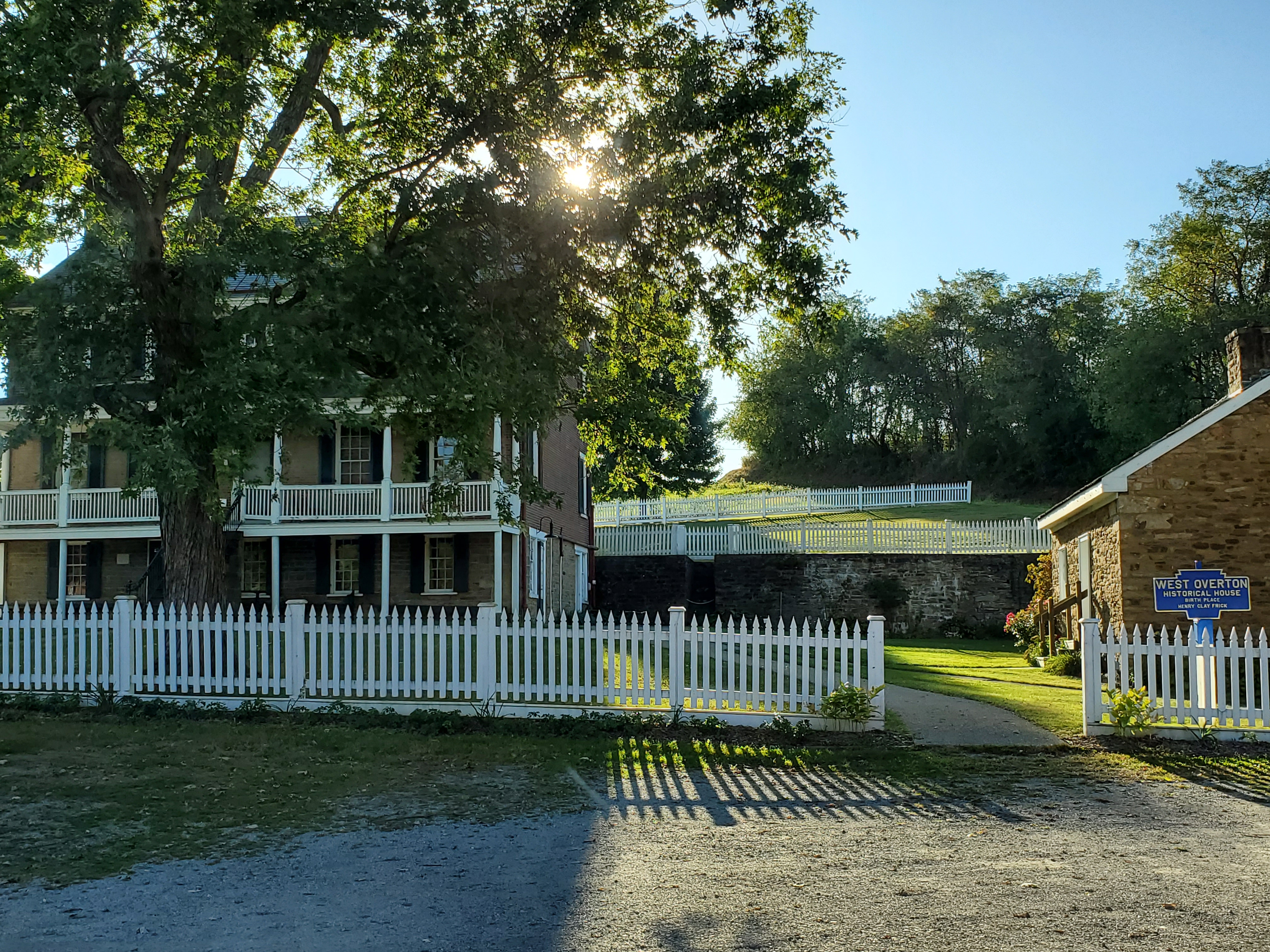 Scottdale was officially incorporated as a borough on February 5, 1874 and named after Thomas A. Scott, president of the Pennsylvania Railroad and Assistant Secretary of War during the Civil War. Scottdale was the headquarters of the H. C. Frick Coke Company. This was Henry Clay Frick’s first business venture and eventually controlled 80% of the coal output in Pennsylvania from mines in Westmoreland and Fayette counties. “Coke” is the raw fuel that was used to heat furnaces in steel mills and other factories and is created by heating coal in a vacuum. The process of producing coke caused intense pollution, particularly from the Beehive coke ovens popular in the late 1800s. In 1881, Henry Clay Frick and Andrew Carnegie formed a partnership where Frick’s coke would supply the mills of the Carnegie Steel Company. Frick would become the chairman of the Carnegie Steel Company.

Also in 1881, Frick took on ownership of the Old Overholt Distillery with Andrew Mellon and Charles Mauck. Due to its status as the hub of the Frick Coke business, Scottdale flourished in the early 1900s but many of the industrial factories and refineries have closed.

Southmoreland School District was formed in 1964 by the merger of Scottdale and East Huntington school districts. Southmoreland is called the “Scotties” as a continuation from the Scottdale Scotties. 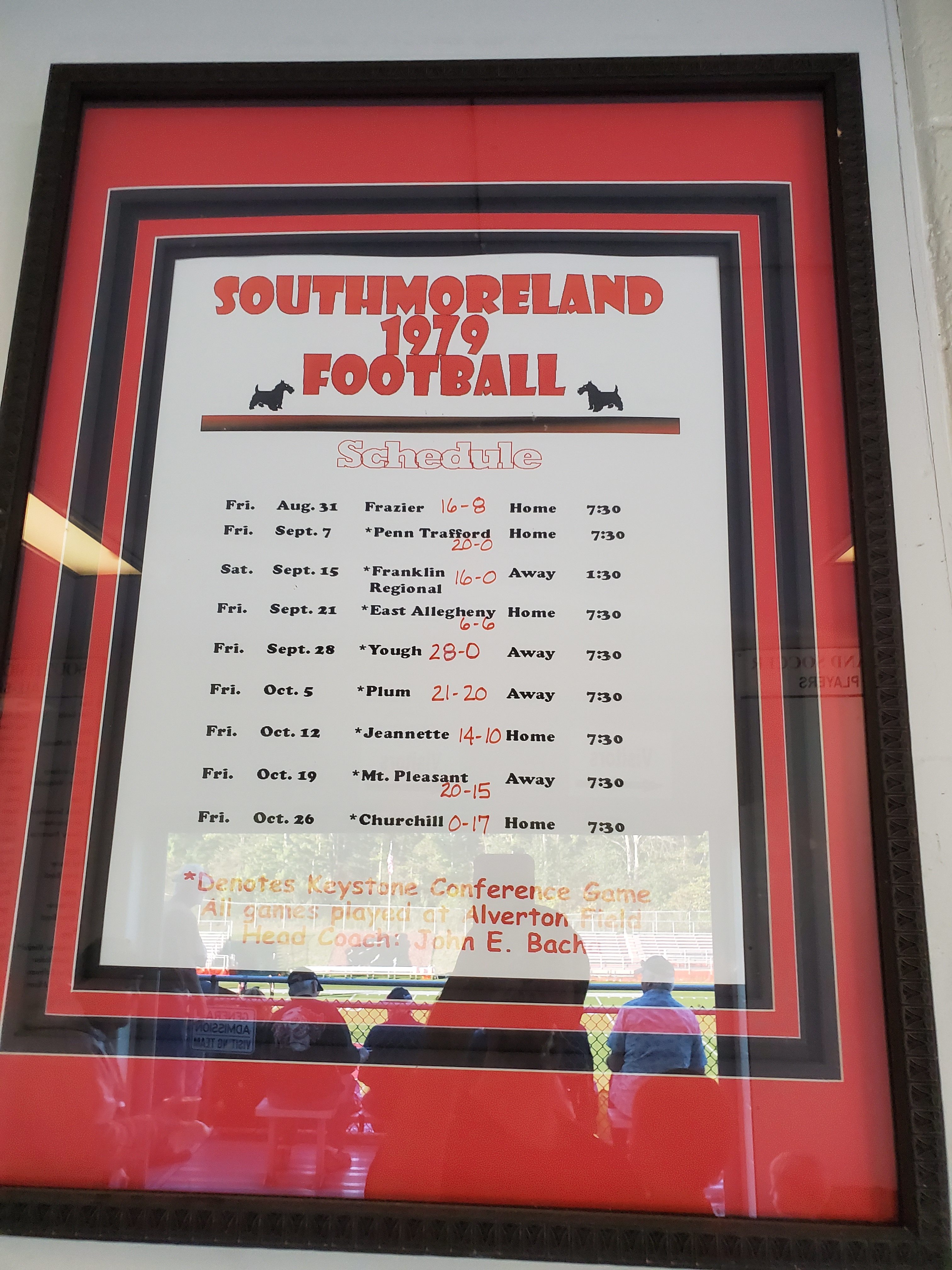 Southmoreland qualified for the 1979 playoffs by winning the Keystone Conference with a 6-1-1 record. There is a plaque in the stadium commemorating that season. They lost to Penn Hills in the first round of the AA playoffs. In the 1970s, the WPIAL had Class AA, A, and B. In 1980, the “B” designation would go away and all classes would have an “A” designation so AA became AAA. This was their only playoff berth in school history.

Thanks to Southmoreland’s offensive line coach Ron Frederick for recommending that we check out Loucks Park in Scottdale. It was a beautiful park situated just above the town’s business district. There were multiple play sets for kids of different ages and plenty of swing sets. The park also had tennis courts and a baseball field and a small pavilion where we had dinner. There were plenty of sizeable shade trees and the park was framed by architecturally homes on neighboring streets. 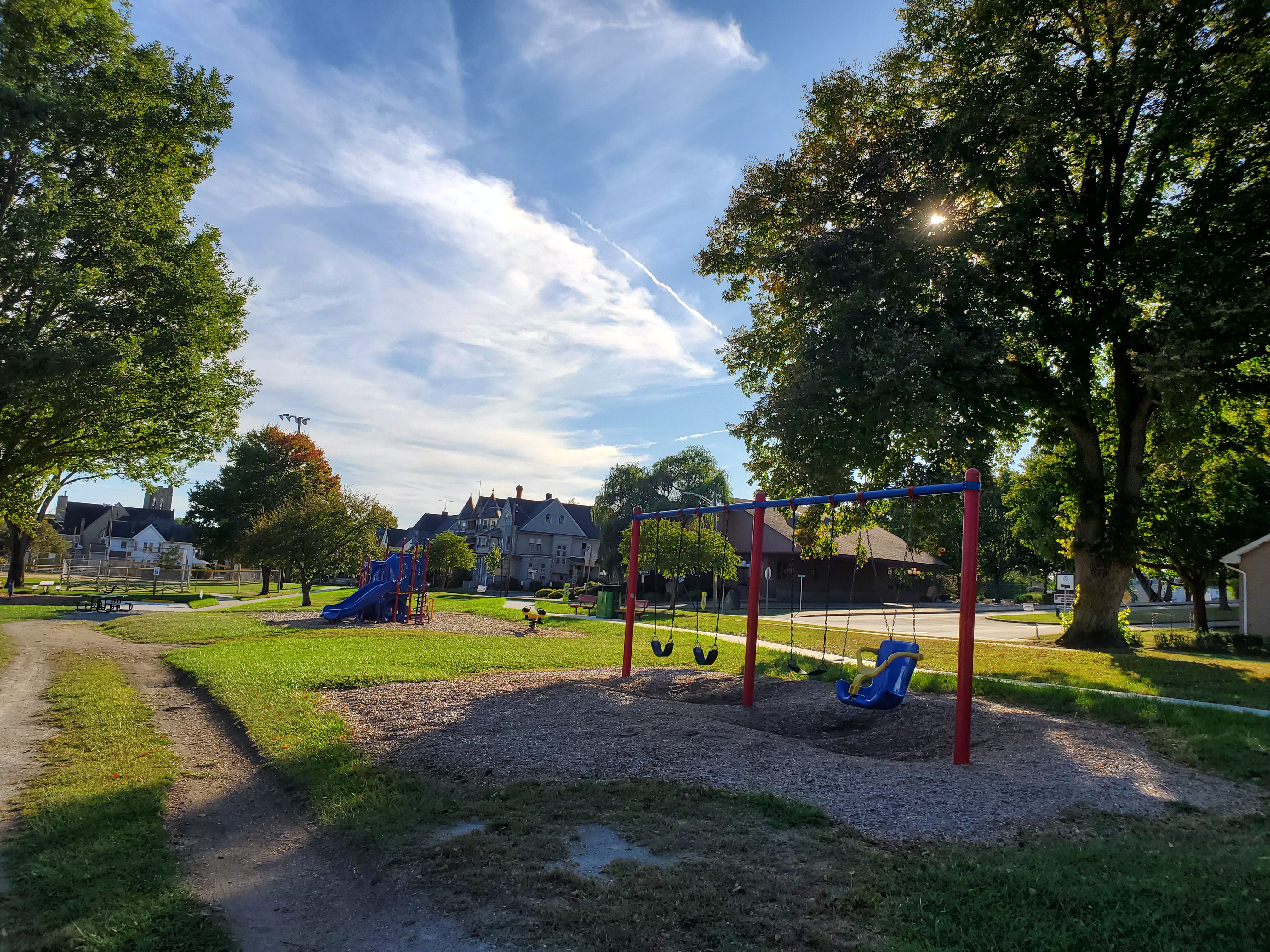 Southmoreland has a beautiful stadium with artificial turf and an impressive clubhouse that sits below Route 981 in Alverton. The field was replaced with artificial turf in 2014 after rain storms in 2013 damaged the field and forced Southmoreland to play their home games at California University for the 2013 season. The stadium faces east with a backdrop of trees that are lit by the setting sun from behind the seats of the stadium. Southmoreland’s stadium is named in honor of Pro Football Hall of Famer Russ Grimm who was part of the renowned “Hogs” offensive line of the Washington Redskins in the 1980s. Grimm has also served as an offensive line coach in Washington, Pittsburgh, Arizona, and Tennessee. 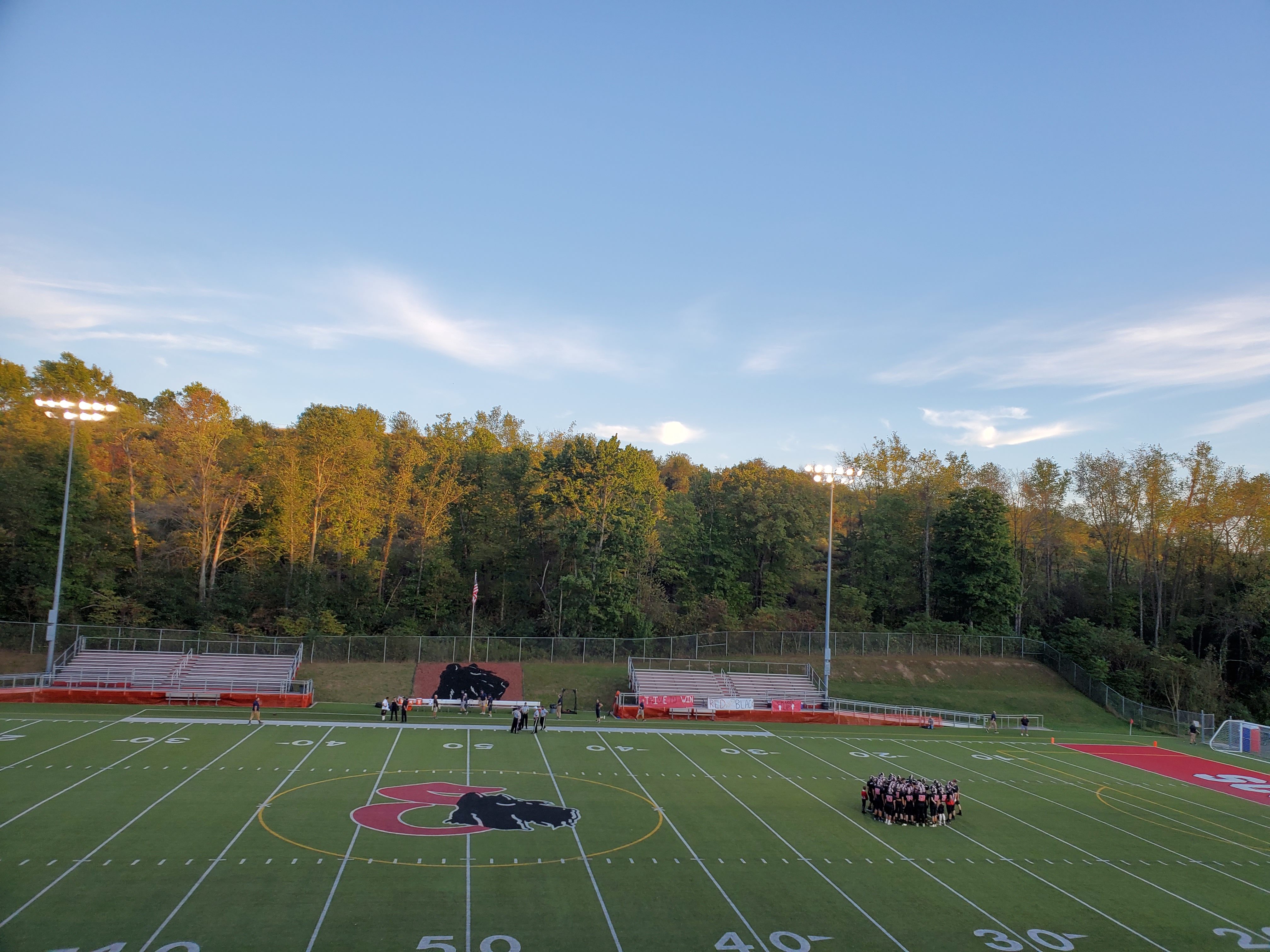 In Harry Potter, “The Grim” was a black dog that signified an omen of death.  At the start of the game, Russ Grimm Field aka “The Grimm,” lived up to it’s name. The stands were packed with the Student Section rocking a “blackout” theme and the team in corresponding all black jerseys. McGuffey had to take two defensive timeouts on Southmoreland’s first drive and the crowd was LOUD.

On the other side, McGuffey’s student section countered with a “white out” theme and their team wore all white uniforms. McGuffey has an experienced team that made the playoffs last year and was also off to a 5-0 start this season. The home stadium lived up to its namesake early, with Southmoreland capitalizing on McGuffey mistakes (a failed onsides kick and a shanked punt) to take a 14-0 lead.

All of the noise and emotion were on the side of Southmoreland, but McGuffey regrouped. The Highlanders made an adjustment on defense from playing a single-high safety to playing two deep safeties in an attempt to take away Southmoreland’s passing game. On offense, McGuffey’s triple option attack found a crease and Nate Yagle dashed for a 66-yard score. McGuffey would block a punt on the ensuing possession and score on their first offensive play, a 15-yard QB keeper by Marshall Whipkey.

With McGuffey playing two safeties deep, Southmoreland went to the ground game but struggled to get much going in the second quarter. McGuffey put together a long drive capped off by a Marshall Whipkey touchdown pass off a play-action bootleg. With 3 minutes left in the half, the Scotties put together a scoring drive, capped off by a 10-yard touchdown pass by Zach Cernuto throwing on the run. The teams, who both average over 40 points per game, went into halftime tied at 21. 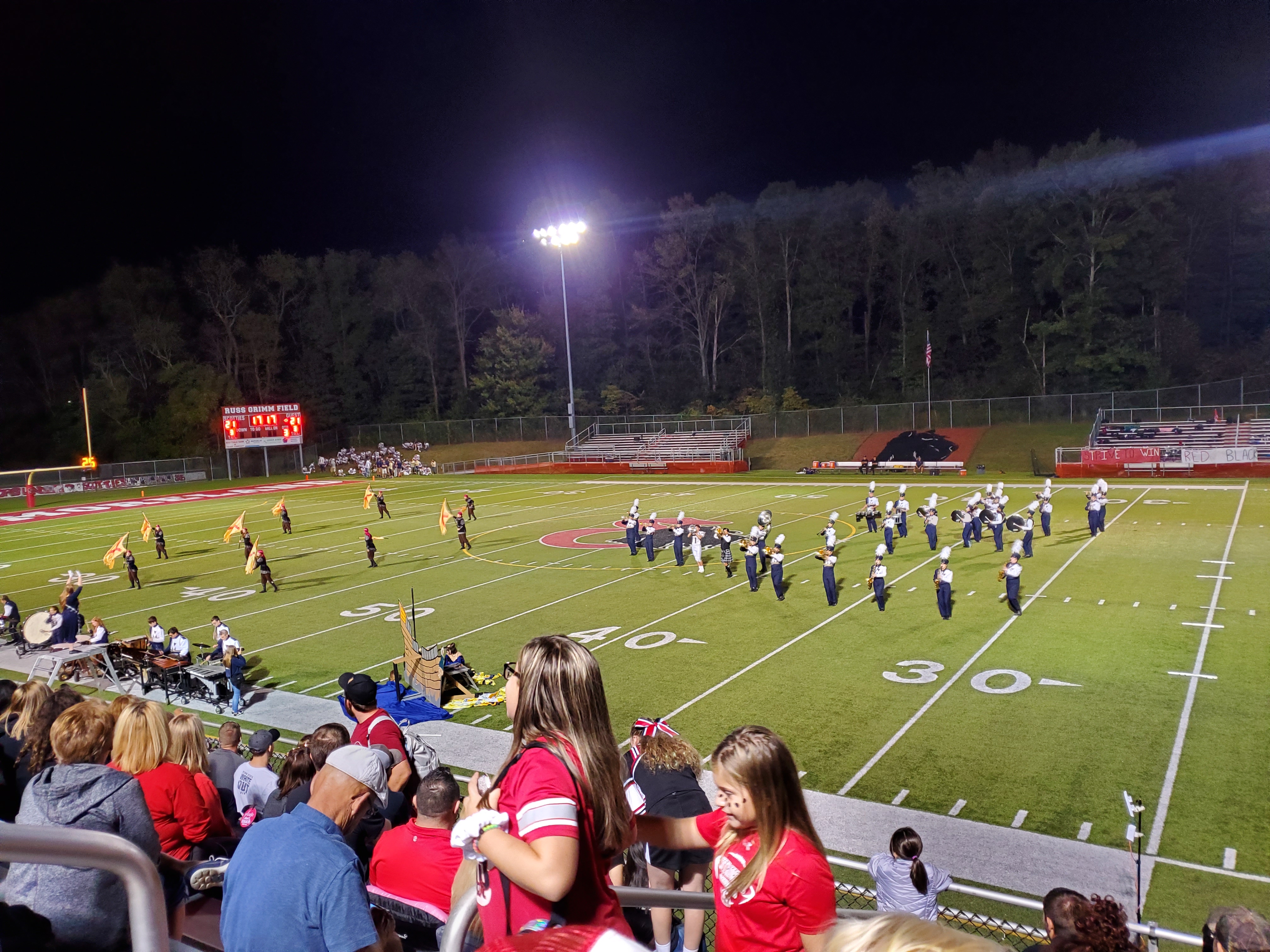 McGuffey had a relatively small band and did a Pirate-themed show. The band marched for over half of the show but the last number just stood in formation, along with the color guard. My guess is they haven’t installed the drill sets for the last number. Musically the band was decent, though the timing of the color guard was a bit off. They had a nice feature with a pirate ship where one of the guard members had to walk the plank. Shout-out to the football player (#1) who picked up the baritone horn and was out there roll-stepping in cleats. One interesting note, if you look at the picture above, you will see McGuffey’s football team doing their halftime preparations on the hill underneath the scoreboard at the far end of the field, instead of making the walk up the hill to the locker rooms. 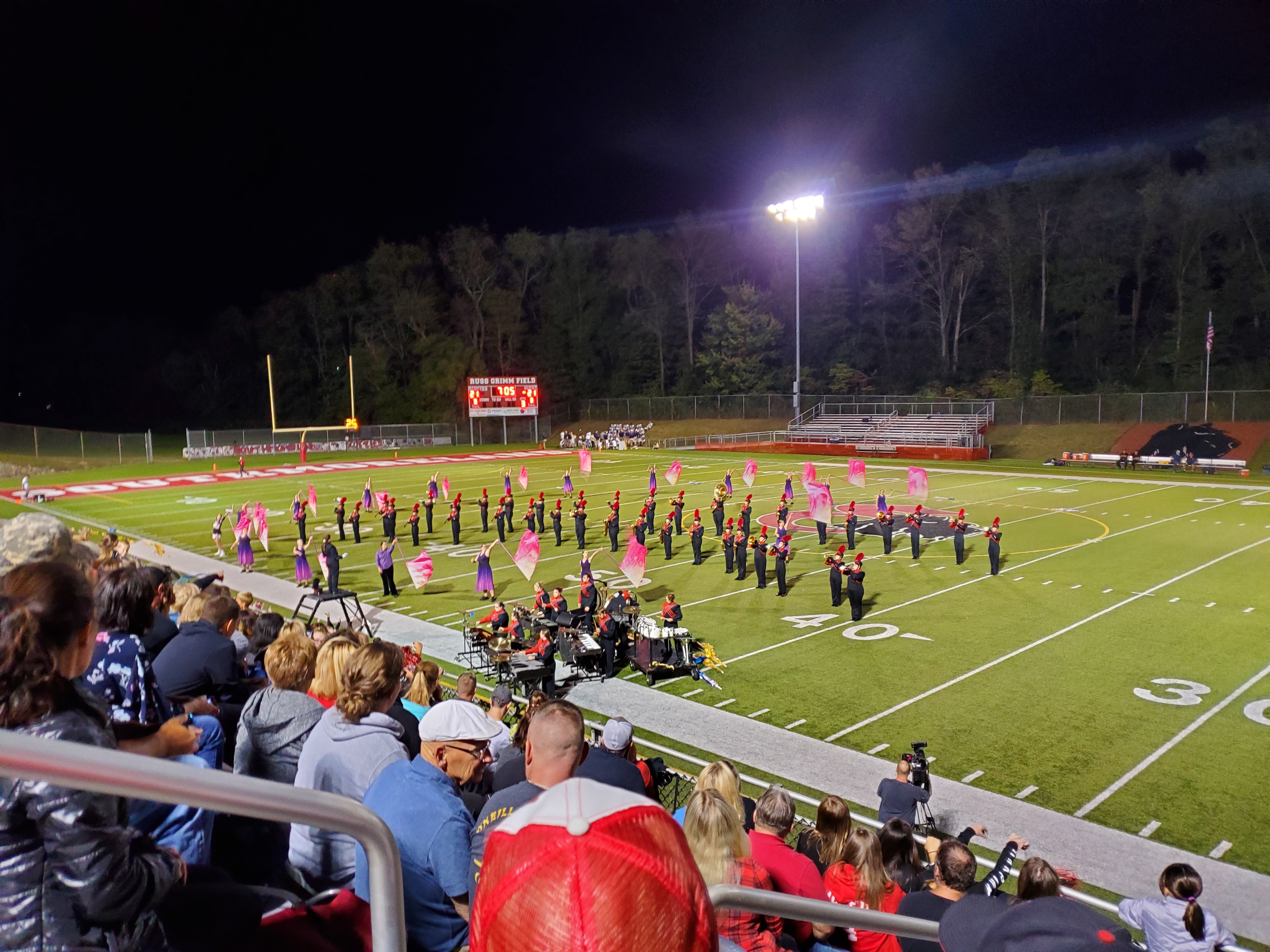 Southmoreland’s band was excellent. They marched for nearly the entire show (except for one segment where the band was in stationary “pods.”) The Scotties band had a variety of sets, including a very impressive “heart” which included an angled turn to play towards the student section then turning back to dress the sideline. Overall, Southmoreland had the best band that we’ve seen this season.

The third quarter started where the first half left off. McGuffey marched down the field on the back of their triple-option attack and scored on another Whipkey passing touchdown. The teams would trade punts with Southmoreland’s defense continuing to come up big. Zach Cernuto, one of the top passers in the WPIAL, had a bit of a tough game overall, but connected with Brandon Peterson for a 68-yard score at the end of the third quarter to keep the game tied heading to the fourth.

In the final quarter, with the crowd still buzzing, McGuffey junior Jared Johnson took over. Johnson was on the receiving end of Whipkey’s second touchdown pass and started the fourth quarter by scampering in from 24 yards out. Southmoreland fumbled the ensuing kickoff and Johnson made them pay with another touchdown run to make it 42-28. Johnson would add a third rushing touchdown (and fourth overall), this time from 57 yards out with 4 minutes left in the game. McGuffey would close out a 27-point fourth quarter with another late rushing touchdown to win 55-28.

We had a great trip to Southmoreland, even if it is a bit of a hike to get to, it is definitely worth the visit. The town of Scottdale has a ton of history that we only scratched the surface of during our brief visit. Some of the oldest buildings in Scottdale date to the 1850s, including the Jacob Loucks House (located on Walnut Ave, built in 1853). One of the most impressive aspects of Scottdale itself was how well-maintained the area was as a whole. For a town that lost it’s major industrial employers, it did not appear to be run down or dilapidated. Yards and sidewalks were well maintained and the homes had an historic nature to them (one of our kids commented on how many homes had turrets). I would be remiss if I didn’t mention that I had previously been to the Overholt Mill and Distillery for one of my best friend’s weddings. If you’re looking for a venue in the area, I highly recommend it. The football stadium was beautiful with a great atmosphere and backdrop. The community showed up in full force to support the Scotties, who are essentially one win away from clinching their first playoff appearance in 40 years.

Post-script: Southmoreland made the playoffs for the first time since 1979! Even though our trip saw the Scotties in a losing effort, we saw the team that broke the 40-year playoff drought. Southmoreland lost to eventual WPIAL 2A Champions Avonworth in the first round of the playoffs.

Tour of the WPIAL: Southmoreland was last modified: December 16th, 2019 by Ian
mcguffeysouthmorelandtour of the wpialWPIAL 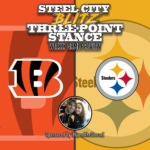 […] Western Pennsylvania. Two years ago I started the Tour of the WPIAL with visits to Rochester,  Southmoreland, and West Greene. Unfortunately we weren’t able to make any visits in 2020 due to the COVID […]