Hard to believe it but we are already just 48 hours away from the Steelers taking the field in the opening preseason game. The Pittsburgh Steelers will host the New York Giants Saturday evening at Heinz Field. Steelers Head Coach Mike Tomlin fielded questions today prior to the team’s afternoon practice. Among the juicer tidbits offered by Coach Tomlin were…

The starters are expected to see approximately 10-12 snaps Saturday night against the New York Giants. Included in that group will be rookie Le’Veon Bell who will also see time with the number twos in the game as well.

Tomlin admitted the increase in hitting and tackling this summer is due to so many new faces on the team. With little time allowed for full contact Tomlin wanted to take advantage of every moment to see guys actually playing football.

Plaxico Burress was taken off the field on a cart today. He was seen later with his arm on a sling. No word on the seriousness of the injury but Plax can’t afford to miss time as he fights for a spot on the roster.

Emmanuel Sanders and Cam Heyward both missed practice with minor injuries and are expected to play Saturday.

Former Steelers offensive lineman Tunch Ilkin worked with the current offensive linemen today. As expected, Mike Adams continued to stay at left tackle while Marcus Gilbert played right. There are some rumblings that Kelvin Beachum is pushing Gilbert for a starting tackle spot as Gilbert has not had a solid camp to this point.

Cornerback Isaiah Green was impressive today as he fights for a roster spot. Plan on seeing a lot of him and other youngsters like Ryan Steed on Saturday night.

Some camp notes today courtesy of @NicktheSteelerman and as always Chris from Bleacher Report. 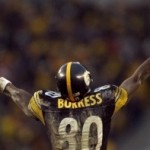 Ryan Clark is a Perfect Example of...

Once a strength, the Steelers Wide Receivers...