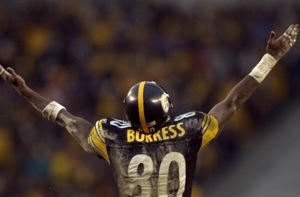 It was confirmed late last night and again this morning that Pittsburgh Steelers wideout Plaxico Burress had indeed torn his rotator cuff.

He is scheduled for surgery on Monday and will be out for the season. At the time of his injury, Burress was running at the number four or five wide receiver.

While there was no guarantee that Burress was going to make the roster, at the very least he was providing some mentoring and leadership for the younger receivers.

Mark Kaboly of the Pittsburgh Tribune-Review suggested that many of the receivers on the roster were having better camps than Plaxico was anyway.

Burress was also in some trouble roster-wise because he doesn’t play special teams whereas guys like Justin Brown, Derek Moye and David Gilreath more than likely will.

If this is indeed the end for Burress it’s a tough end for a player who has had a career of ups and downs both on and off the field. After spending time in prison for having a firearm in a nightclub (with which he shot himself accidentally) Burress has tried to hard to pull things back together.

Burress’ career will not end in Canton but he is a guy known for good seasons and for great plays. I know I wish him the best regardless of whether this is the end or not.

Marc Uhlmann writes for and Co-Owns steelcityblitz.com. You can hear him Mondays at 4pm on TribLive Radio talking Steelers all year long.

Status of Big Ben still up in...

Is Martavis Bryant on the Steelers’ Radar?