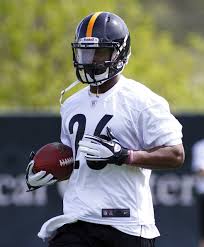 I’m just as excited as everyone else is about several of the Pittsburgh Steelers’ rookies but we must urge caution.

First-round pick Jarvis Jones continues to make great, instinctive plays while second rounder Le’Veon Bell appears ready to start sooner rather than later. Toss in really positive camps for third and fourth round selections Marcus Wheaton and Shamarko Thomas and there is a ton to be excited about. Sorry to be the guy to rain on the parade, but let’s remember these guys have yet to play a game yet. While I believe all four will have an impact in Pittsburgh sooner rather than later, we must temper our excitement a little.

Jones has looked quite pedestrian at times in coverage and against the run but his progress to this point cannot be denied as being anything other than very good. Bell didn’t run with the first team today and he’s buried at the bottom of the depth chart but make no mistake that Bell is the top all-around running back right now in training camp.

Wheaton has shown explosive quickness and has picked up more of the mental side of Todd Haley’s offense than is typically seen by most rookies. I suspect he’ll see a lot of action this year. Thomas has been a fan favorite from the moment he was drafted and with good reason. He’s got a very uplifting personal story and packs a wallop from the safety position. His coverage skills need work though and he’ll need time to get better in that department.

Steelers’ Options Should Adams Not Be Ready

Velasco Has Been a Savior for the...