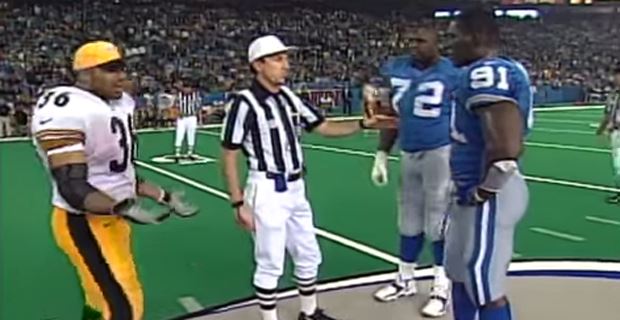 Because the Pittsburgh Steelers and Detroit Lions play in opposing conferences, this means they only play each other every four years. Since 1986, the two teams have played nine times with the Black and Gold winning eight of those. In those eight victories the Steelers’ winning margin has been 12.6 points over the Lions. The one lonesome loss in that period is one that no Steelers’ fan alive back then will soon forget.

It was November 26th, 1998 and here in the United States it was Thanksgiving Day. In those days there were two football games played on the late fall holiday and they were always in Detroit and in Dallas. Tradition held that the Lions would host the first game of the day and the Cowboys would host the second half of the doubleheader.

The Steelers drew the ‘lucky straw’ and were selected to play Detroit and that honor brought back some horrible memories of another Turkey Day gone bad. Fifteen years prior to the 1998 meeting, the Steelers traveled to the Motor City to play the Lions. Behind the ridiculously bad play of quarterbacks Mark Malone and Cliff Stoudt, the Steelers would lose 45-3.

As bad as that loss was, I’m not sure it was entirely as awful what would happen in 1998 in the now defunct Pontiac Silverdome.

Each team would score a touchdown and kick three field goals in regulation. The last of which was by the Steelers’ Norm Johnson who sent the game to overtime tied at 16. Because I know you’re wondering, the Steelers scored their touchdown on a pass from Kordell Stewart to Will Blackwell. The Lions’ touchdown was score on a pass to Herman Moore from some guy named Charlie Batch. Incredible huh?

While many in Pittsburgh surrounded their televisions and their turkey dinners at the same time, the captains for both teams went to midfield for the coin toss. In that era, the overtime period was a full 15 minutes and it was sudden death. Meaning, the first team to score, regardless of how, would win the game.

Referee Phil Luckett flipped the coin and Jerome Bettis can be heard saying “tails.” Luckett immediately states that the Steelers have called “heads” and have lost the coin toss. Despite the protests of both Bettis and defensive captain Carnell Lake, the Lions were awarded the ball. They would move into position for Jason Hanson’s winning field goal from 42 yards out and that was the ball game.

The whole thing still gives me indigestion. Odd because I hadn’t even had my Thanksgiving Dinner yet on that day but the real reason was having to deal Lions’ fans for the next few years.

Some interesting side notes to the game…

-Barry Sanders was held to just 33 yards on 20 carries.

-Nolan Harrison, who has a big social media presence these days, had a sack in the game.

Let’s hope this week’s game in Ford Field does not come down to another unfortunate situation like that one. Or if it does, can we be on the positive side of it?

SCB Steelers’ Quick Hitters: The “I Want My Bicycle” Edition