The Steeler Fan’s Guide to Going to Training Camp 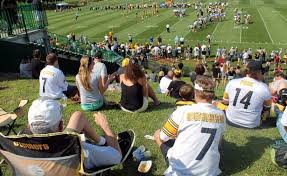 The Pittsburgh Steelers open their 2014 Training Camp in ten days and if you have never been to training camp then I strongly urge you to do so at some point in your life.

First of all, unlike many NFL teams, the Steelers do not charge a fee for attending their training camp. That’s reason enough right there to start planning your visit. Secondly, most people will tell you that where the Steelers host their camp is one of the best places in the NFL.

The Steelers head east to Latrobe, Pennsylvania where tucked away in the Laurel Highlands is St. Vincent’s College. The field there is appropriately named Chuck Noll Field, but there are also several other practice fields on the site.

If you want to go to just to watch, then get yourself a spot on the hill near the top where you’ll find some shade. If the heat isn’t too bad, then move down the hill a bit. Some fans like to sit in the stadium bleachers and that’s fine. You get a very nice, up close view but you’re also packed in tight.

I prefer to lay out a blanket on the hill with the practice going on in front of me and the Steelers’ version of the ‘NFL Experience’ going on behind me. If you have kids, this is another reason to go. The ‘Experience’ has all kinds of kid-friendly things to do. They can get team tattoos with just about any player’s number or they can go over and attempt to kick field goals or jump around in a bounce house.

If you are there to get autographs, then prepare to be up close and personal with your fellow Steelers’ fans. You’ll need to be aggressive but try to stay patient and respectful. Players all go about signing autographs a little differently. Some will just grab whatever is thrust in their direction  while others will make a point to sign for kids or people who aren’t acting like the Beatles have just arrived from Europe.

The common location to get your favorite Steelers’ signatures is along the stairs leading to and from main buildings that houses the Steelers while they are in camp. During my visits, I’ve always preferred to hang around the fence dividing the fans from the players down on the field. Many players will get in some extra work after the official practice has ended and then will wander over once the crowds have thinned.

My daughter and I used this method to get the autographs of Hines Ward and Bill Cowher. Some of it is fate because you never know who will linger on the field and where, but I find it to be a good place to hang out.

If you go, make sure you have cold drinks, snacks, sunscreen and a sharpie. If you’re really interested in the action on the practice field then I suggest some binoculars as well.

Going to training camp is a quest every Steelers’ fans should make at least once in a lifetime.

If Anything, Pouncey’s are Guilty of a Lack of Common Sense

Plenty of Question Marks at ILB for...

I highly recommend going to the opening night practice at Latrobe High School if you want autographs. All the players sign for about 15 mins. prior to practice… If you want Ben, Antonio Brown, Polamalu, etc. you’ll only get that 1 guys signature if you’re lucky…

When I went I got guys like Kreider, Starks, Hoke, Mendenhall, Aaron Smith, etc. very easily though by running around to the different guys.

Excellent point about the night practice Chris. That’s a great experience as well.

I’ve never been to the night practice. Do you have to get there early? Is it hard to get in?

Hey Todd, you definitely want to get there early. A lot of it depends if you want to be there to watch the action or just get autographs. I say this because if you want to see the scrimmage then get into the stands, otherwise stay on field level.

I really appreciate the information. How early should we get there?

Parking is very limited as the town is pretty small. Some homeowners will offer parking for $20 or so. Plan on at least 2-3 hours early. Also, hang on the fence that surrounds the field before practice starts if you want autographs.

I really appreciate the information.

Our pleasure! Have a great time!!!