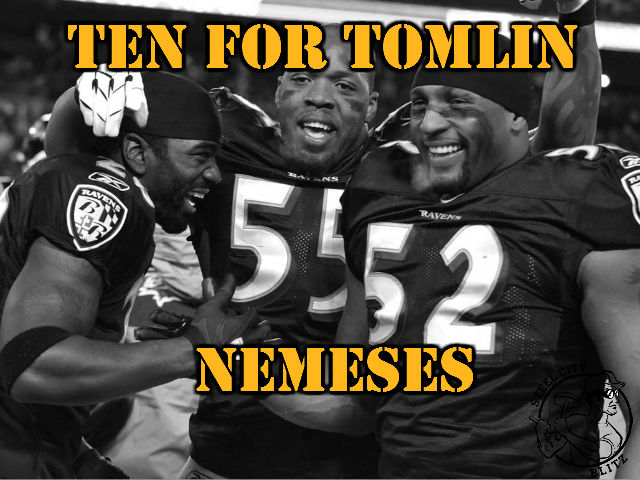 The 2017 Season will be Mike Tomlin’s 11th as the head coach of the Pittsburgh Steelers. With his decade at the helm, he is currently the fifth-longest tenured coach in the NFL. Only Bill Belichick, Marvin Lewis, Mike McCarthy, and Sean Payton have been in their respective positions longer than Tomlin. As we count down the days until the start of Training Camp and the start of the 2017 season, we’re taking a look back at Mike Tomlin’s 10 year tenure as Steelers head coach. The “10 For Tomlin” series will be 10 posts each featuring 10 items from the past decade. We started by looking at key statistics and recapping the best games and worst games. We looked at the player-personnel side with the best draft picks and best free agents, along with the assistant coaches who have helped Tomlin on the sidelines along the way. We also took a look at some of our favorite reactions. Today’s focus is on the men who have been an absolute thorn in the side of Tomlin’s Steelers. These people go beyond just being an opponent and can only be categorized as a nemesis.

To start, we had some internal staff debate over whether to limit the list to just players or to include non-players. The ultimate decision was to include only players on the formal list, but to have a special honorable mention for Roger Goodell, John Harbaugh, and Bill Belichick who all certainly fit the bill as a nemesis to Mike Tomlin’s Steelers. An additional honorable mention goes to the team itself. Sometimes they are their own worst enemy and play down to the level of their opponents. The Steelers greatest opponent is sometimes not those wearing the opposing uniform but the ones in black and gold.

Jones plagued the Steelers for years as a kick returner in Baltimore. When the Steelers cut Dri Archer in 2015 and found themselves in need of a returner, they signed Jones from the waiver wire. Unfortunately, Jones was even worse than Archer was and was cut after 4 games. Jones has 2 career return touchdowns against the Steelers, the first coming in a 13-10 Ravens victory in a game Byron Leftwich started for the Steelers. But his most infamous return is a non-touchdown when Tomlin possibly/maybe/definitely interfered with Jones’ path down the sideline in a Thanksgiving night game.

Does Ray Lewis really need an introduction? He was the loud-mouthed leader of the Ravens defense for nearly two decades. He solidified his “nemesis” statured early in Tomlin’s tenure when he laid a hit on 2008 first round draft pick Rashard Mendenhall that was so hard Mendenhall’s collarbone shattered. Lewis was always all over the field against the Steelers, tallying 67 total tackles, 6.5 sacks, and 3 interceptions against the black and gold in his career. On top of his play, he could trash talk with the best of them and hated Pittsburgh just as much as we all hated him.

Gronk has absolutely terrorized the Steelers. In five career games, he has 30 receptions for 496 yards and 8 TDs. Only once did the Steelers find a way to keep him out of the end zone (by have CB Cortez Allen shadow him all over the field) and he still had 7 catches for 94 yards in that game. He has two 3 TD games against the Steelers and has been one of the most dominant and productive opponents. To make matters worse, the Steelers still haven’t found a way to contain him, particularly at big moments in games.

If you remember back to my “worst games of the Tomlin Era” post, two of those ten games featured Louis Murphy going off. The first was as a member of the Raiders in 2009 when Bruce Gradkowski found him 4 times for 128 yards and 2 TDs. Both scores in came in the 4th quarter, including the game winner with just seconds to play. Five years later he returned to Pittsburgh as a member of the Tampa Bay Buccaneers. On a team with Mike Evans and Vincent Jackson, Murphy exploded for 6 catches and 99 yards. His biggest contribution was once again in the 4th quarter when he hauled in a pass from Mike Glennon and scampered 41 yards to set up Tampa’s game-winning score.

When your nightmares flash back to that fateful January in Denver when Tim Tebow tore up the Steelers, it’s not Tebow that makes you cringe. It’s Demaryius Thomas, running completely untouched through the Steelers secondary. Thomas had over 200 receiving yards in that game, including the 80-yard touchdown in overtime. In 4 career games against the Steelers (two of them in the postseason) he has 18 receptions for 415 yards and 4 TDs. The only time he didn’t score against Pittsburgh was in the 2015 Divisional Round. Thomas has been a big-play hitter for the Broncos, including scoring the game-sealing touchdown on a WR screen he took to the house in the 2012 season opener (which was Peyton’s first game in Denver).

Ngata’s most memorable moment in the Steelers-Ravens rivalry was when he broke Ben Roethlisberger’s nose with a club arm to the face. The play wasn’t penalized and Ben memorably was seen making faces on the sidelines to adjust his face to his misshapen nose. Ben stayed in the game and the Steelers won and sealed the division title then topped the Ravens again a month later in the playoffs. On top of that memorable moment, Ngata was one of the most influential members of the Ravens defense. His play in the trenches was dominant against the run and freed up the linebackers behind him (like Bart Scott and Ray Lewis) to make big plays in their own right. Of his 29.5 career sacks, 6 have come against the Steelers, along with 2 of his 5 career interceptions.

Terrell Suggs is the kind of player you need in a rivalry. If he is on your team, you love him. If he is on your rival, you hate him with the fire of a thousand suns. To make it even better, he hates Pittsburgh right back and is quite vocal about it. Suggs backs up his talk with play on the field. He has 14.5 sacks against the Steelers, his most against any team not named Cleveland, and 2 interceptions (his most against any team).

Cribbs has played on some terrible Cleveland Browns teams, but always found a way to impact gams against Pittsburgh. While he broke into the league as a special teamer, the Browns used him on offense as well against Pittsburgh. He returned 3 kickoffs for touchdowns against Pittsburgh, his most against any team. In the worst game of Tomlin’s tenure – the 2009 loss to a 1-win Browns team – Cribbs played a key role. His kick and punt returns kept the Browns ahead in the field position battle and he rattled off a few big runs on offense, including a 37-yarder that set up the game’s only touchdown. Cribbs was a constant terror against the Steelers and victimized their special teams on multiple occasions.

Mathis is the career leader in interceptions of Ben Roethlisberger, with six. Mathis has been a thorn in Ben’s side his entire career, returning three of his six interceptions for touchdowns. In Tomlin’s first season, Mathis dominated the Steelers-Jaguars playoff game with two interceptions. The interceptions came on consecutive drives, the first he returned for a touchdown and the second set up a Jaguars score. This flipped the game from a 7-7 tie at the end of the first quarter to a 21-7 Jaguars lead in the span of under two minutes. The following season, Mathis returned an interception 72 yards for another score but the Steelers would come from behind to defeat Jacksonville in the revenge game.

As if any other player would top this list. Brady has been public enemy number one since the Patriots topped the Steelers in the 2001 AFC Championship Game. During Mike Tomlin’s tenure, Brady has gone 6-1 with 22 touchdowns and no interceptions. He has shredded the Steelers defense to the tune of a 72% completion percentage and has averaged 325 yards per game. Brady introduced himself to Mike Tomlin in 2007 by throwing for 399 yards and 4 TDs in the game when Anthony Smith guaranteed a Steelers victory. Brady didn’t face Tomlin’s Steelers again until 2010 when he threw for 350 yards and 3 TDs – all of them going to Rob Gronkowski. Brady led a 55-31 torching of the Steelers in 2013. AFter the Steelers tied the game at 24 in the 3rd quarter, Brady led 5 straight scoring drives including 4 touchdowns by attacking the Steelers defense deep over the middle. Brady had another 4-touchdown game in the season opener of 2015. Tomlin’s only playoff meeting with Brady came this past season in the AFC Championship when Brady once again lit up the Steelers defense for 384 yards and 3 TDs. The Steelers have not been able to concoct a defensive scheme to slow down Brady and the Patriots and he is the primary force standing between Pittsburgh and their seventh Super Bowl. 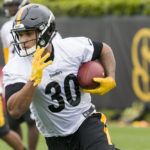