Last year, the Pittsburgh Steelers cut running back LeGarrette Blount following his early departure from the field during a game in Tennessee. They cited a negative attitude and off he went to New England.

In case you missed it, Blount went on to help the Patriots to a Super Bowl victory too. This is exactly the concern I have if the Steelers’ front office makes the decision to cut loose Martavis Bryant following his most recent failed drug test.

There’s no doubt in my mind that Bryant would be snapped up quickly by any of the other teams in the league should he hit the open market. Despite this, I believe the Steelers would be doing themselves a favor by releasing Bryant.

The Steelers gambled when they drafted Bryant out of Clemson in the fourth round of the 2014 NFL Draft. Bryant had played second fiddle to Sammy Watkins but had a strong 2014 season and then had a big game against Ohio State in the Orange Bowl.

Bryant had issues at Clemson though off the field and the Steelers were well aware of those transgressions but went ahead and chose him anyway. You know the rest of the story from last year and then how he came into this season with 20 lbs of added muscle. He has been widely selected as a “breakout” player this season from many media outlets as well.

Unfortunately, I believe the Steelers should part ways now for a couple of reasons.

First, as Jeremy Fowler of ESPN reported, this offense is for marijuana use. This puts him in stage two of the NFL’s Substance Abuse Program. Should he test negative again, he would be facing a ten-game suspension.

Secondly, this is reportedly the fourth time Bryant has failed a drug test. What evidence do any of us have that Bryant isn’t on the same exact path as former Browns’ receiver Josh Gordon? The Steelers cannot afford to have a guy in street clothes more than half the season only to see his career basically over with another suspension.

I’ve heard the Steelers are very much on the fence in terms of what to do with Bryant right now. A four-game suspension is bad but the Steelers can still thrive without him. Can they risk him getting popped again though? I don’t think they can and right now I see no way he gets a second contract either.

It’s a tough decision the Steelers are facing and if this were a one-time incident as it was with Le’Veon Bell then I wouldn’t even be wasting my time writing this. But this has been a pattern with Bryant and I fear it will continue.

If any organization needs some positive PR right now it’s the Steelers. After the Michael Vick signing and the fallout from the Bryant news, perhaps a hard decision like cutting Bryant is what is needed. 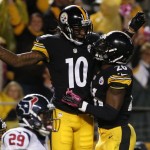 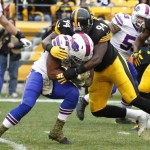 I hear where you’re coming from, and I wouldn’t be shocked at all if MB becomes the next Josh Gordon.

That being said , now isn’t the time to cut him. Markus Wheaton is in a contract year and I seriously think he could be in for a big season. I say wait until the end of the year and see how MB straightens up (if at all) and see how Wheaton plays. If Markus breaks out you extend him and probably let Bryant walk at the end of his rookie deal if he has no more suspensions between now and then. If he does, just cut him.

It’s the same result but you have time to let Wheaton develop and see what you have in Sammie Coates.

This thing apparently runs deeper than just another failed test. The Steelers took a chance on him and they aren’t surprised. If he can’t make Better decisions now hen why should the Steelers think that will suddenly change?
He’ll do his four games and then come on like gangbusters but when is the next failed test? It’s coming.

This is the dumbest thing ever

A very tough decision indeed. Bryant certainly isn’t doing himself any favors failing drug tests left and right. However, Bryant is still a young guy with a lot to learn. I would be very hesitant to pull the trigger this early. Maybe he’ll be able to shape up and take responsibility for his actions.

Time to get tough with these millionaires.2nd time they test positive should be thrown out of the NFL

My guess is this explains why we drafted Coats in the 3rd RD. Between the rumbling of AB and what the Steelers already knew about Bryant they were padding the position. However, it’s only his second year so let it play itself out and hope he grows up.

You are more correct than you may know!! Good insight.

Nice, i agree with you. Men in their young twenties aren’t ready for the money,fame,and attention of being a pro,let alone one who is an emerging star. Scare the shit out of him with this and see if he grows from ir.

I say they should keep him and here is why, Wheaton is no deep threat, he isn’t someone who take the top of the Defense he is like AB; A 5-15 yard WR. 2nd:Coates hasn’t shown he can be somebody the Steelers brass trust to come in a help out right away. Finally if he has failed a drug test before this one why was he never suspended. I know how the drug policy works:1st offense is a 2 game suspension and if it’s the 2nd offense it’s 4 games so something does not add up here. Either I’m wrong and if I am I’ll admit it, no question what so ever or the league let Bryant slide and they never said anything to start with. So tell me fans how is this a 4 game suspension and how is it that now the test results have come out?

First, I agree with you. The flags surrounding Martavis Bryant are scarlet red. And as Ed Bouchette pointed out, the Steelers knew about this at least some point because otherwise they probably wouldn’t have drafted a WR in the third round.

But I tend to agree with Carlos and the others.

Bryant is still on a rookie contract and if he does get suspended again, the Steelers can cut them then.

I still say keep him. Unless Coates develops real quick then the offense won’t have as many 20yrd+ plays as they had last season. Not to mention you make Ben unhappy cause he will say he wants a Big WR that he throw the passes up to and where only he can retrieve it. Everybody is aware that if you fail 1 drug test it’s a 3 game suspension and if they say he has failed more why wasn’t he punished before hand?

MB deserves the suspension…its for weed though. I live in CT, and it’s treated like a parking ticket now. The NFL needs to update the substance abuse policy or start suspending parking violatets

I totally agree. Marijuana is not what it once was but the problem is that the rule is what it is. He has to play by those rules unfortunately.

I don’t understand the reasoning behind why they should “dump him now.” What do we gain by dumping him? What do we lose by keeping him, having him play and possibly be suspended again? Dumping him means not playing for us, almost definitely playing for somebody else. Keeping him means playing for us, maybe being suspended, not playing for anybody. How is dumping him even in the conversation? Players who are suspended do not count against the 53 man roster, so we can still have someone on the team replacing him, so I’d love to see some more insight as to the origin of this idea.

I’m looking long-term Brian. If, and I stress “IF” the next level for him is a ten-game suspension then how can a team afford to keep him around? It becomes the Josh Gordon thing all over again. We just can’t rely on guys who may or may not be there. That said, if this suspension is reduced then they have to let things play out and give him a chance.

I definitely see where Marc is coming from and I agree. Yes, it would be great if MB got his act [and life] together and never again ran afoul of NFL rules or the law. The fact is, where drug use is concerned–especially with an immature young man whose response to this situation reveals he remains clueless and irresponsible–the odds are strongly against him remaining clean hereafter. So what does this mean? Do the Steelers ‘stay the course’ with MB and develop him as their future star #2 or #1 WR? If so, what if the odds pan out [as they usually do…which is why they’re ‘the odds’] and he self-destructs his career? If this happens after he receives a big second contract, we’re potentially on the hook for many millions of dead money plus left with a gaping hole in our offensive firepower [because Coates or anyone else can’t develop asap if MB was getting the targets and snaps]. Ditto this second reason if MB blows up while on his rookie contract. Keeping him is a gamble. Releasing him is a gamble. Either way, another selfish jerk with questionable smarts and no self-discipline has again imperiled the professional goals of the whole team and its coaches. Btw, my comment re MB remaining “clueless and irresponsible” pertained to his post-game reply to reporters who asked about the suspension that he ‘isn’t focusing on that. I’m focused on the team and how I can help.’ Considering he can hardly help the team in whatever games he’s suspended, perhaps he could ‘best’ help his teammates right now by focusing on his selfish immaturity, the resulting suspension, and the fact that he can best help his team by considering both [through long and hard self-reflection] and growing up. Unfortunately, what we’re hearing, instead, is he’s ‘mad.’ If he was mad at himself, I’d say that’s hopeful. If he’s mad at the NFL or reporters or the rest of the world for picking on him, I’d say the odds against him reforming just grew exponentially longer. Cut him.

Thanks for commenting Jim. You bring up a great point about MB’s comments after the game. Why wasn’t he thinking about the “team” instead of himself?

[…] a potential one year suspension for failing the NFL’s Drug Policy. I suggested that the Steelers should seriously consider cutting Bryant after his first transgression simply because I didn’t have the faith he’d make the […]